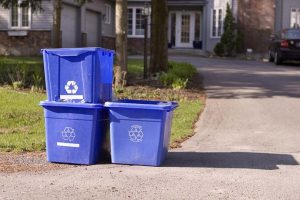 Debate over source separation has carried on since the single-stream concept emerged, but it has received particular attention over the past year, because of China’s import restrictions and the ensuing market fallout.

Conferences around the country have featured discussions on the topic, and industry experts have been forced to defend single-stream, which has become the norm among municipal recycling programs nationwide.

But in New Jersey, a small municipality recently rolled back its single-stream program and reinstated source separation. Oakland, which has about 13,000 residents, had been utilizing a single-stream system for more than five years, but economics caused the borough to rethink that path this year.

“It was continually costing us more per ton to recycle single-stream throughout 2017,” Eugene MacMahon, Oakland’s recycling coordinator, said in an email interview. He noted China’s import restrictions certainly played into the market downturn Oakland was experiencing.

As Resource Recycling recently reported, although New Jersey was less reliant on China for its downstream markets, when the West Coast began having trouble exporting material, recyclables from that region began moving into other markets throughout the country. Often, that material was sold for a lower price than existing suppliers could afford to charge, because West Coast operators were desperate to move it, and any amount of revenue would beat landfill tip fees.

For Oakland, which collects about 1,800 tons of recyclables per year, the market downturn meant the borough paid more than $25,000 throughout 2017 to move its single-stream recyclables, or an average of about $14 per ton. By January 2018, Oakland was paying $30 per ton to move material.

“If we stayed with single-stream, in April 2018 it would have cost us $40 per ton with no rebound in sight,” MacMahon said.

Instead, Oakland switched direction. In February, the borough reimplemented dual-stream recycling, requiring residents to place fibers in one bin and commingled plastics, glass and metals in the other. The borough sends its material to Atlantic Coast Fibers in Passaic, N.J., the same outlet it used during its single-stream phase.

The finances have changed significantly. Commingled containers are still a negative-value item, MacMahon noted, costing about $3.50 per ton. But the city now receives about $10 per ton from the fiber.

Collection frequency also changed. Rather than weekly collection, the bins are collected on alternating weeks. Garbage collection increased to twice per week year-round, instead of seasonal changes in the schedule.

MacMahon explained the city timed the change with its new garbage collection contract, and the city engaged in outreach to get the word out about the change. Still, he noted a fair amount of confusion and incorrect recycling in the first few weeks. Some residents continued putting out materials in single-stream style. Collection crews simply didn’t pick that material up, leading to a lot of calls to the borough and a lot more residents getting informed about the new system.

“It takes about a month to really get all the residents educated to the new change and separating their recycling material properly for pickup,” MacMahon said.

He said it’s too early to say whether the change has meant a lower volume of recyclables coming in. Either way, he is optimistic about the change and what it means for the city.

“The towns that stayed dual-stream seem to do better in a prolonged downturn in the recycling markets,” MacMahon said.

Dual-stream collection and its potential to produce cleaner bales has led a number of communities to discuss reversing course, including elsewhere in New Jersey. The concept came up at a meeting of county recycling coordinators and state officials earlier this month.

“It is really local; you have to work with your local MRF operator,” said Marie Kruzan, executive director of the Association of New Jersey Recyclers. Kruzan, who attended the meeting, added that it’s very difficult to say whether the same plan would work in two different municipalities, because each program is set up a little differently, or its MRF buyer wants a different product. “Those differences are tremendous,” she said.

Local programs are taking a variety of actions to respond to the markets, including MRFs slowing their lines. And some programs are looking at increased contamination enforcement. Kruzan also noted that dual stream, although perhaps effective for some programs, is not a panacea.

“We had contamination when we had dual stream, too,” she said. “It would be lovely if there was one answer, but there isn’t probably one answer. I think this is a conversation we’ll all be having for a while.”

For the country’s largest recycling operator, the concept of reversing course away from single-stream is out of the realm of possibility.

“That ship’s sailed,” said Susan Robinson, senior public affairs director for Waste Management, during a session at WasteExpo in April. “I have a really hard time imagining we’re going to go backwards on that.”

During a recent presentation in Concord, N.H., the topic of dropping single-stream came up as a potential fix for the market problems. Mike Durfor, executive director of the Northeast Resource Recovery Association (NRRA), described an interesting trend NRRA has seen when it sells material from the 400 municipalities it represents across New England.

There is a substantial difference between selling material from single-stream and dual-stream programs, but Durfor noted the difference is often a matter of perception.

“We deal with a lot of mills that won’t accept anything from a single-stream plant regardless of how well they slow down the line or add more people or that type of thing,” Durfor said.

He also offered a blunt assessment of the current state of single-stream programs.

“I was asked a couple weeks ago, ‘Is single-stream dead?’” Durfor said in the event broadcast by ConcordTV. “Well, it may not be dead, but it’s certainly on life support in terms of how are we going to fix this.”