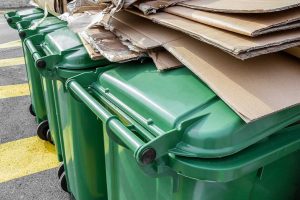 A large end user of OCC has acquired a single-stream MRF from QRS Recycling in order to secure more of the corrugated stream.

WestRock has taken over the former QRS Recycling plant in Louisville, Ky. It’s a 60,000-square-foot residential single-stream MRF, which WestRock says will handle approximately 9,000 tons per month of material.

WestRock, a corrugated and consumer packaging producer, will sort and send fiber to a variety of downstream outlets.

“This will be our largest recovery facility at WestRock,” said DJ VanDeusen, senior vice president of recycling at WestRock, in an interview with Resource Recycling.

WestRock was attracted to the Louisville site in part for its supply of recovered fiber to feed the company’s mills.

“The strategic rationale behind the facility is it does sit very well, geographically, to support the internal WestRock recycled mills on the corrugated side primarily,” VanDeusen said. The Louisville site is centrally located and has rail access, he noted.

All of the OCC collected at the facility will be consumed by WestRock. The company will use a portion of the mixed paper, VanDeusen said. Material used internally will primarily go into the company’s corrugated packaging.

“While there’s always the opportunity, given what fiber markets are doing, to be able to provide material on the consumer packaging, paperboard side, the targeted output for the facility is all on the recycled corrugated,” VanDeusen explained.

All grades considered, the company will use “over 50 percent of the fiber that’s recovered for internal consumption at our WestRock mills,” VanDeusen said. “The remainder will be sold to third parties, primarily based on geographic location.”

WestRock uses solely fiber in its manufacturing, so all of the plastics and metals collected at the Louisville MRF will be sold to outside buyers.

The acquisition of the facility is not changing WestRock’s overall consumption volumes, but is simply changing where the material used by WestRock’s mills will come from.

The acquisition comes in the midst of volatile fiber markets, caused primarily by the loss of China as a market for mixed paper. It could present an opportunity to take advantage of a large supply of low-cost material. In many markets, mixed-paper bales are moving for zero dollars, and in some places they have negative value.

“Given the market conditions, everyone is exploring what that means in terms of the products and the requirements of our products and what we sell,” VanDeusen said. “I think, with the abundance of mixed paper, that everyone’s evaluating [whether it makes] sense in the recipe.”

The “Amazon effect” also played into WestRock’s decision to acquire the facility.

OCC is a substantial feedstock for WestRock’s production of containerboard and paperboard products. The company consumes more than 4 million tons per year of OCC. That’s more than 80 percent of the recovered fiber it uses.

The OCC supply chain is shifting away from the traditionally dominant commercial generators such as grocers and retailers, VanDeusen noted.

That’s due to a variety of factors, including contamination, access to recycling and more.

“The opportunity for us to expand in the residential processing side, we believe, continues to give us more direct access to where that OCC is landing,” VanDeusen said. “As the residential stream gets browner, we’ll continue to explore ways to be more connected to that material at the source.”

The Louisville facility is the fifth single-stream MRF in WestRock’s network of 22 facilities.

The Louisville plant also handles organics it collects through a contract with the city of Louisville. The facility doesn’t actually process organics, but food scraps collected from restaurants and other commercial entities are brought to the site and stored before they’re picked up by a downstream processor.

“The organics is a new step for us,” VanDeusen said. The company will be looking to determine whether there are opportunities to provide organics service at other facilities it operates.

The Louisville facility has an interesting history of ownership and operation. QRS built it in 1986 and sold it to BFI in 1995. In a subsequent transaction, it came under ownership by Republic Services, which leased it to SP Recycling. After SP went bankrupt, QRS started operating the facility again in 2015.

Under the new acquisition, WestRock will continue to lease the property from Republic, VanDeusen said.

Greg Janson, CEO of QRS Recycling, said QRS consolidated another nearby facility into the Louisville plant in 2016. Since then, the company has been improving the facility with an eye toward selling it. The recent acquisition was the result of that plan and WestRock making an offer QRS couldn’t refuse, Janson said. The existing employees are staying at the plant.

With the Louisville facility sold and the company no longer involved in a Maryland plastics recovery facility, QRS is focusing on its St. Louis mixed-rigid plastics processing plant as well as its stake in NICE Rail Products, a company that produces composite railroad ties.