The industrial sector is the lifeblood of most state economies, and that’s certainly the case in Tennessee, where automotive, food, furniture and building-products companies create significant numbers of manufacturing jobs.

At the same time, they also discard major tonnages of material.

According to a 2015 waste characterization study conducted by the University of Tennessee, these leading industrial clusters are actually doing quite well when it comes to materials diversion, recycling at a rate of around 83 percent. But, still, much material heads to the landfill, driven there for a variety of reasons, including a seeming lack of demand for some loads and realities in collection and transportation logistics that tip the economic scales toward disposal.

Recently, Tennessee stakeholders have looked to help overcome those barriers by systematically boosting “industrial coupling” – in other words, by building relationships between large generators of material and potential users that are located nearby.

The centerpiece of the initiative is the Tennessee Materials Marketplace (TMM), a project between the Tennessee Department of Environment and Conservation (TDEC) and the United States Business Council for Sustainable Practices. Financed through a three-year performance-based grant, the TMM is an online platform for the trading, donation, and/or sale of discarded materials from one entity to another.

The project launched last year and has nearly 70 companies and organizations currently participating.

As it evolves, the platform could serve as a prime example of how state officials can help spur more materials diversion in the commercial sector while at the same time strengthening local manufacturing and keeping recovered material in stable markets close to home.

Anyone working with Tennessee industries for any amount of time will realize that, like the rest of us, expertise and knowledge is limited to what one does every day. “People are brilliant within their own facilities and their own industry,” said Kahley Malloy, director for the eastern division of Complete Recycling, a company that facilitates and brokers industrial recycling, “but the end of the day comes and they drive home right past the same companies that the rest of us do and wonder, ‘What do those guys do?’“

In developing a regional recycled materials marketplace, it’s also important to ask “What do they produce?” and “What do they throw away?”

In Tennessee such questions have led to conclusions that show the power of leveraging materials locally. The state is home to more than 40 companies (employing a total of more than 8,000 workers) that regularly incorporate post-consumer materials as front-end feedstock for their products. Various grades of fiber and plastics are currently used to produce bags, bottles, baskets and other products.

There are, however, other materials, equally valuable or even more so, that are not so simple to incorporate back into the manufacturing pipeline. It’s those materials that are being targeted by the TMM.

To date, there are 69 companies and organizations using the platform, with 65 different materials listed. There have been five material transfers since September 2017 (when the TMM platform began accepting members), and those exchanges represent recovery of over 20 tons of material that would usually end up in the landfill.
Those numbers show the initiative is still in its infancy. But the progress to date also indicates how stakeholders are working to develop the underpinning of a more circular economy.

“The positive deliverables are not just the metrics of materials that have been diverted from the landfill,” said Larry Christley, manager of TDEC’s Materials Management Program. “Many of Tennessee’s industries, which are regulated by TDEC, are now engaged in a state-wide effort with our department to repurpose and return discarded materials back into Tennessee’s economy.”

The notion of using the power of the internet to try to connect generators and end users of material is nothing new – a number of exchanges have been constructed in recent years across the country. But many have seen diminished success, often due to a lack of data, a lack of facilitation between interested parties, uncertainty over the source or disposition of materials desired, a lack of supplier commitment from providers of those materials, and barriers in terms of transporting material once a connection has been made.

TDEC, through the Office of Policy and Sustainable Practices (OPSP), engaged in research nationwide to determine if any of these common issues were being successfully overcome in existing programs. Personnel within OPSP began a relationship with the United States Business Council for Sustainable Development (USBCSD), which was conducting several successful regional materials exchanges using its own platform.

The USBCSD’s system had been able to successfully mitigate a number of the common exchange problems. After its initial rollout in Austin, Texas, it has been adopted by the city of Detroit, the state of Ohio and the nation of Turkey., in addition to Tennessee. It also won the World Economic Forum Digital Disruptor Award for 2016.

In Tennessee, once the platform was selected, state officials went to work recruiting users.

OPSP, primarily through an existing program called the Tennessee Green Star Partnership, has sought buy-in from players in key industries throughout the state, many of which already have a working relationship with the USBCSD on a national and world-wide level. 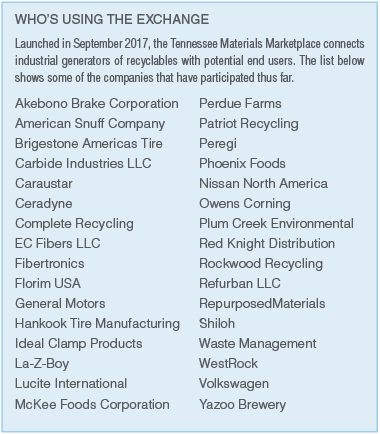 Among the companies that have committed to the project are American Snuff, Bridgestone Americas, General Motors, Lucite International and Unilever. OPSP continues to recruit industry partners through events such as the annual Tennessee Environmental Conference.

The office is also promoting the marketplace in tandem with the Tennessee Department of Economic and Community Development. One goal of the partners is to provide examples of stakeholders working together to strengthen the “industrial ecology” in different areas.

A project that could be a prime spot for such experimentation is the Memphis Regional Megasite, a project from the Department of Economic and Community Development that is aiming to bring large industrial tenants to a 4,100-acre parcel in western Tennessee. The project just received several million more dollars for development to make the location more “shovel-ready” – and it would make sense to use the initiative to foster practices that are good for the environment. This is a site that has already devoted much effort to diverting any process wastewater away from the relatively pristine Hatchie River, channeling it several miles to the Mississippi. The site is also home to the largest solar array in the Southeast that is solely devoted to an industrial park.

Using the megasite to turn waste materials from one industry into feedstock for another could be the next step in a global trend. There are examples of this happening already at industrial parks in Denmark and Taiwan.

Strengthening ties between business and government

Clearly, the marketplace can serve as a tool that can benefit the state of Tennessee on multiple fronts. But perhaps the biggest payoff could be a better working relationship between state officials and leaders from companies fueling local economies. Such alignments could have major positive repercussions for the future of materials recovery and much more.

“The public/private partnership represented with the activity of the Tennessee Materials Marketplace will provide dividends beyond the value of materials and job growth within Tennessee’s recycling infrastructure,” said Vincent Leray, environmental scientist with the TDEC Recovered Materials Section in the Materials Management Program. “This platform provides for mutual benefit, shared outcomes and trust within the regulated community and our department.”

Vaughn Cassidy is an environmental consultant with the Tennessee Department of Environment and Conservation, Office of Policy and Sustainable Practices. He specializes in assisting Tennessee industry with source reduction and sustainability. He can be contacted at [email protected].