In My Opinion: Putting it all together

For those of us focused on waste diversion, the last two years have seen the release of a series of groundbreaking studies that simultaneously provide validation and unease regarding the challenges posed by our growing food and packaging waste streams.

Food waste has been an increasing area of focus for social justice and environmental activists alike in recent years, given the converging challenges of food insecurity faced by far too many as well as finite landfill space and the climate consequences that follow when food waste goes to a typical disposal site.

The recent focus on packaging waste is more nuanced, with conflicting assumptions about the recyclability of foodservice packaging as well as about the best ways to capture and process the material.

Yet both food and foodservice items must be addressed by municipalities hoping to make good on waste diversion goals set during the last decade.

The breadth and depth of findings in recent research make a strong case that industry stakeholders and policymakers should consider leveraging innovations in compostable packaging to move forward in this realm. This will require a “systems thinking” approach regarding infrastructure, policy and design to effectively address the challenges that have prevented municipalities from tackling these waste streams in the past.

It’s hard to pick a favorite among the list of jaw-dropping statistics regarding the impacts of wasted food. Perhaps the most shocking came recently from the University of California Carbon Neutrality Initiative: Researchers on that project calculate that if food waste were a country, it would be responsible for the emission of more greenhouse gasses than any nation other than the United States or China. The report notes China contributes 25.9 percent of global greenhouse gas emissions, the U.S. emits 13.9 percent and food waste is responsible for 6.7 percent.

At a time when one in seven Americans is food insecure, the overwhelming need to mitigate the drivers of the food waste before the stream hits the curb is all the more important. Recognizing that no prevention system is ever perfect (and the fact that trimmings from vegetables and other foods are a fact of life in every kitchen), a focus on infrastructure is necessary to divert wasted organics from the landfill.

The most comprehensive work on the sources and impacts of wasted food were presented in 2016 by ReFED’s “A Roadmap to Reduce Food Waste by 20 Percent.” This groundbreaking study concluded that the United States alone spends $218 billion per year on the 52.4 million tons of food sent to landfills in our country each year.

Among the long list of initiatives called for in the report is a concerted focus to expand access to commercial composting as the route to address 5 million tons per year of wasted food. This represents over one-third of the 13.2 million tons of preventable food waste, by far the most impactful of the 27 solutions proposed in the report. The urgency behind this study lies in the fact that when food is sent to a typical landfill, it usually breaks down anaerobically, creating methane that typically is released into the atmosphere and is considered at least 20 times more harmful than carbon dioxide.

While the need to send wasted food to commercial composting operations is clear, the challenges associated with siting and financing new commercial composting locations remains an ongoing concern. Addressing infrastructure issues has been a focus of the composting industry for years – facilities typically face headwinds on multiple fronts from inception through to operation. In many states, a commercial composting facility often must meet the same siting requirements as a landfill and the finished compost sometimes can’t be marketed as a fertilizer due to restrictive labeling standards. 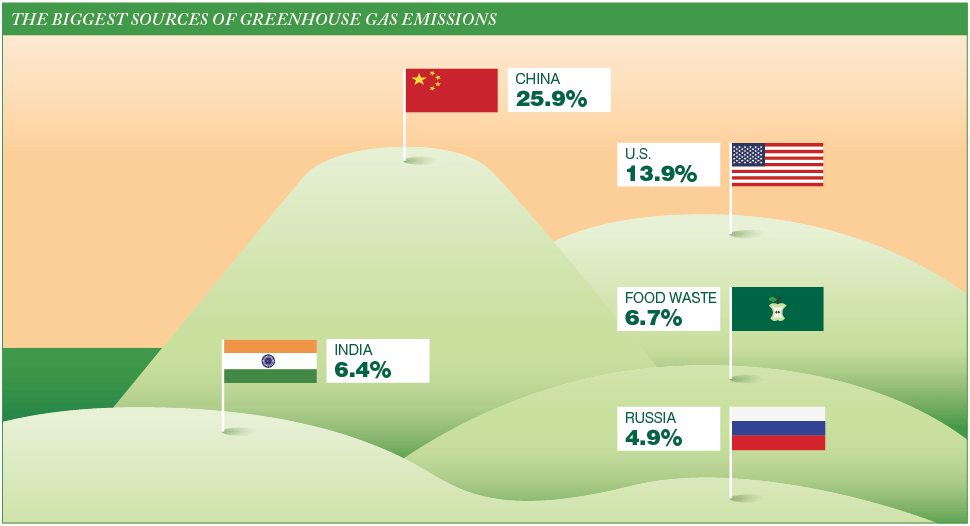 Analysis from the University of California’s Carbon Neutrality Initiative indicates that food waste worldwide is a greater contributor to global greenhouse gas emissions than any individual country with the exception of China and the U.S.

Given the additional challenges of achieving sufficient route density to reach profitability in collections, the relatively low cost of landfill disposal in many regions and the lack of guaranteed feedstocks where organics bans do not exist, it is easy to understand why commercial composting infrastructure is insufficient today.

Despite these challenges, there are a number of examples of regional waste diversion policies calling for bans on food waste from landfills. While this is an important first step, often little consideration is placed on how to develop incentives and accommodate the needs of the required commercial composting capacity. It’s clear from a policy perspective that a more comprehensive approach will be required to assist the development of new composting facilities to accept the growing organics stream envisioned by the proposed landfill bans.

An ocean of plastics

Let’s now turn to the packaging side of the diversion equation.

Perhaps few packaging statistics have earned more coverage in the past few years than the estimate that by 2050, the weight of plastic in the ocean will surpass that of fish. This headline was the first shot across the bow from the Ellen MacArthur Foundation’s “New Plastics Economy” report from 2016. This report broke new ground by establishing a clear understanding of the importance of plastic packaging to our global economy as well as the undeniable impact of its expanding use. From beginning-of-life resource consumption to inadequate end-of-life recycling and reuse infrastructure, the environmental challenges surrounding plastic packaging are alarming.

Equally important is the endorsement the report received from CEOs at Coca-Cola, McKinsey, Proctor & Gamble and Unilever, as well as from leaders of numerous other businesses and institutions. The report calls for a rethinking of how packaging is designed and used to drive more focus on reuse and recycling – goals that lie starkly at odds with the lightweighting focus that has dominated sustainability initiatives from many packaging companies over the last 10 years. The corporate world is clearly understanding the need for solutions in materials recovery.

While the impacts of the original “New Plastics Economy” report were still reverberating, the Ellen MacArthur Foundation followed up in 2017 with “Catalysing for Action.” This noteworthy report took the difficult step of moving from defining the problem to presenting recommendations, showing how industry and policymakers should tackle the issue of packaging waste. The report’s recommendations included the notion of eliminating or significantly redesigning some forms of packaging that have proved difficult to recover. It also called for increasing the use of compostable plastics for items such as clamshells and other packaging products that come in direct contact with food.

While the report did not quantify the impact that scaling up the use of compostable plastics could have on diversion, it was pioneering in its recognition of the innovations represented by compostable packaging and the many benefits it offers.

Whether driven by fears from downstream plastics processors or by materials recovery facilities that would handle initial processing, the concerns regarding food-contaminated packaging have long quashed recycling conversations around foodservice packaging. Few MRF operators would look kindly on the prospect of accepting, for example, a load of post-consumer waste from a stadium – the prospect of nacho-cheese-encrusted packaging is enough to turn the stomach of all but the most aggressive of waste sorters.

The simple fact is that by any measure, plastic that’s severely contaminated by food is trash. While it’s theoretically possible to ask the public to separate their food scraps (with the goal of being composted) from their packaging (with the goal of a cleaner stream for recycling) at a bin station, numerous reports from the field have found such expectations to be unfortunately foolishly optimistic. And such a system also doesn’t get around the nacho-cheese conundrum and the fact that such material has poor – if any – end markets. 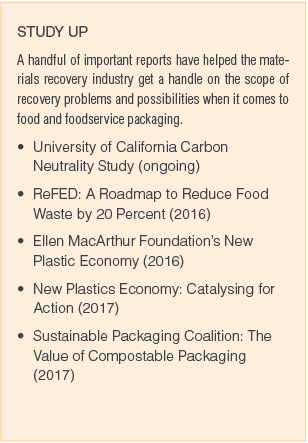 As further validation of the recommendations, the SPC’s work at the 2016 Farm Aid concert found that through the systematic use of compostable packaging, fans could throw half-eaten food along with plates and cups into a single bin. Veteran Compost, the commercial composter working with the event, found that it received more than double the amount of food scraps by weight than what was received from the back-of-house stream alone.

This important study speaks to the potential of applying a concept called systems thinking to the challenges to food and packaging waste streams.

Systems thinking is an approach to problem solving that considers each piece in a system, the relationship between them and the network as a whole.

When it comes to the intersection of food waste and foodservice packaging, this strategy encourages stakeholders to make decisions that move beyond individual silos and to find solutions that ensure the ultimate objective – environmental and economic sustainability – is not lost in the process.

The potential path ahead

In the current industry environment, it’s increasingly difficult to feel optimistic about the ability of our cities to reach the ambitious waste diversion goals set in the early 2000s. The viability of plastics recycling facilities (PRFs), which were presented as a key step in boosting plastics sortation, is looking more dire by the day (the most high profile of these plants, a partnership between QRS and Canusa Hershman, idled last year). And the end markets for pre-picked plastics Nos. 1-7s and post-consumer mixed fiber have been stalled by China’s import ban and erratic import license rules.

As a result, we now must find an innovative – but realistic – process to address important components of the evolving waste stream.

The studies released in the past two years – along with the growing number of success stories at stadiums, universities and restaurants pursuing front-of-house compost streams – represent a call to action. By integrating focused procurement, well-managed operations and effective contracting with commercial compost sites, major venues have shown diversion rates beyond 80 percent are achievable. In fact, the Seattle Mariners just earned Major League Baseball’s prestigious Green Glove Award for diverting 96 percent of all waste at the team’s ballpark, Safeco Field.

Surely, challenges remain for industry representatives and policymakers aiming to replicate these successful models on a citywide or regional scale.

But the research that has emerged of late shows practical steps toward progress.

Now is the time for all of us to get started on moving the needle despite numerous market and infrastructure constraints. We’ve already wasted far too much.

Ian Jacobson is the president of Eco-Products, Inc., a leading provider of environmentally responsible foodservice packaging solutions. He also serves on the board of Boulder, Colo.-based Eco-Cycle, one of the nation’s largest nonprofit community recycling organizations. He can be reached at [email protected].