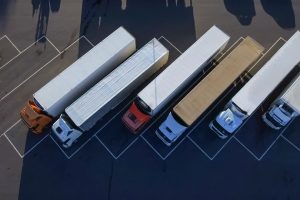 The recycling industry has not escaped the fallout from a tight trucking market. Recent regulatory movement and a growing driver shortage have contributed to rising freight costs, just months after extreme weather impacted the shipping sector.

“We’re already in a pro-carrier environment, and we think this will continue for quite a while,” said Avery Vise, president of trucking research at FTR (Freight Transportation Research). The group recently offered analysis on the 2018 outlook for the trucking market.

Will Sagar, executive director of the Southeast Recycling Development Council, said the freight market was discussed at the recycling organization’s board retreat last week.

“It is a serious issue,” Sagar told Resource Recycling. “Not only are our end users facing high freight rates, there are not enough drivers. Loads sit, waiting to ship.”

“Freight costs are a key factor in managing logistics and can often be a challenging barrier to cost-effective recycling,” explained Kerrin O’Brien, executive director of the Michigan Recycling Coalition.

One key factor in the freight issue is the electronic logging device (ELD) mandate, which took effect in 2016 but required compliance by Dec. 18, 2017. Congress included the mandate in a federal transportation bill passed in 2012. It requires commercial truck drivers to use ELDs, which record drivers’ hours automatically. Truckers in the past have logged hours by hand on paper.

Proponents say the mandate will promote safety by effectively enforcing restrictions on the duration of time a trucker can be on the road before resting. Critics say they introduce unnecessary costs, delays and confusion.

In a survey during the webinar, 52 percent of respondents said the mandate has had a “moderate” impact on their trucking capacity and 11 percent said it has been “severe.” Thirty-four percent described the impact as “minimal,” and 3 percent reported no impact at all.

According to FTR, the effects will show up through reduced miles for truckers who have not been in compliance with hours-of-service rules in the past. It could also strain driver supply as it may lead some to exit the market.

Drivers are already the biggest capacity constraint on the market, Vise said.

“It’s not necessarily that there aren’t enough trucks. It’s that there’s not enough drivers,” he said. “Both, of course, can be addressed through investment and spending.”

Rates in both the spot and contract markets are up markedly: At the end of 2017, spot rates, which refer to the cost of services at a given time rather than as negotiated in a longer-term contract, hit a record high.

“I expect the cost of freight to increase,” Sagar said. “And the availability of drivers will be slow to improve.”

The tight trucking market comes shortly after the fallout from Hurricane Harvey and Hurricane Irma shot freight costs up substantially. During the E-Scrap Conference in September, one speaker said freight costs had increased 500 percent to 800 percent as a result of the hurricanes.