Fiber sector closes a tough year and braces for more 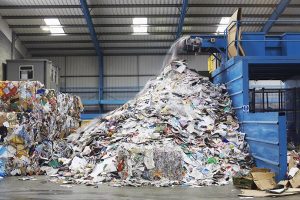 The global recovered paper market experienced “a quite challenging year” in 2017, according to an expert at paper industry research firm RISI. And those challenges are only expected to continue as Chinese import restrictions ramp up.

“The market has been extremely volatile in most of the key regions,” said Hannah Zhao, senior economist and recovered paper specialist for RISI. She was speaking during a Dec. 19 webinar.

Following are the challenges of 2017 and current outlook for the recovered paper sector, as described by Zhao.

Although China would come to play a major role in the industry disruption, OCC prices kicked off the year with signs of market volatility. They started to rise quickly in late 2016 and OCC began 2017 trading at near record high prices. This was supported by both supply and demand.

Booming manufacturing and paper and packaging markets “laid a solid background for strong OCC demand worldwide.” On the supply side, the quantity of available OCC was strained by the rapid increase in e-commerce. The so-called “Amazon effect” has brought corrugated boxes to households rather than retail stores, generally holding back the recovery rate and quality of OCC.

Meanwhile, a major international market change was in the works. Chinese officials launched National Sword at the beginning of 2017 “to control the trash getting into China,” Zhao said. It didn’t cause a whole lot of concern at first: Most industry players thought it would be similar to the Green Fence operation in 2013 in that it would have an impact, but wouldn’t permanently restrict trade into China.

But during a Chinese government committee meeting in April, officials began talking about banning mixed-paper imports altogether, and “people got a little bit worried on that,” she said. In July, the country officially announced an “unsorted paper” ban — which many experts took to mean mixed paper — would take place by the end of the year. Chinese authorities at the same time said they would reduce imports of certain materials, including recovered fiber, and replace them with domestic resources.

“By July, people in and outside of China start to realize that this time Beijing might become very serious, and most people start to worry about the future markets,” Zhao said.

The concern was due to China’s position in the recovered paper market. Even though its import volume compared with domestic collection has declined in recent years, from 49 percent import share in 2005 down to 36 percent in 2016, China has been the largest recovered paper buyer for many years.

OCC and mixed paper are an increasing portion of Chinese recovered paper purchases and were the top two grades the country’s importers purchased in 2016. The majority was OCC at well over half of all recovered fiber imports, with mixed paper next at about 20 percent. Mixed paper has eclipsed old newspaper (ONP) since 2012.

Roughly 90 percent of the mixed paper imported into China last year came from three areas: the U.S., Western Europe and Japan. Another 5 percent came from Oceania, and the remainder was shipped from various other countries.

Imports of mixed paper from the U.S. and Western Europe, the two largest suppliers of the material to China, dropped “very significantly” during the first 10 months of 2017, Zhao said. At the same time, imports from Japan increased slightly.

The U.S. market has been “highly dependent” on exports. Some 40 percent of scrap paper collected in the U.S. was exported in 2015 and 2016, with the majority going to Asia, and most of that going to China. That’s up from 17 percent exported in 2000.

“Under China’s new (recovered paper) policy, we don’t know where the U.S. recovered paper surplus can go,” Zhao said. “This will be a quite big challenge for the U.S. paper recycling industry, especially for the mixed-paper sector, like the MRFs.”

Mixed paper exports have dropped so much that RISI has stopped tracking U.S. mixed paper prices to China.

The policies will impact the containerboard and cartonboard sectors more than others, because of the amount of recovered paper used in those grades. Chinese domestic recovered paper supply “will not be enough to meet its demand growth, at least in the near term,” Zhao said.

That will create a supply shortage for Chinese mills, Zhao said. And although virgin pulp imports have increased recently, virgin material alone cannot solve the problem, particularly for containerboard mills.

Attention is turning to alternative outlets for surplus recovered fiber.

One option is for the mixed paper to remain in its country of origin and be consumed by domestic mills. But it’s uncertain whether the generating countries have enough mill capacity to handle all that material.

MRFs can increase sorting to yield a cleaner recovered paper coming out of the mixed-paper streams. RISI recently reported U.S. processors were creating a “sorted residential paper and news” product through increased sortation and could sell it for $45 to $55 more than mixed paper. But a large-scale increase in capacity will take more investment, effort and time.

“It’s not going to happen all of a sudden, overnight,” she said.

Another option is diverting the material to other countries. India and Southeast Asia have garnered much attention as alternatives to China.

Those countries have growing paper industries and rising recovered paper demand, so they may be able to take more mixed paper in the future, Zhao said.

However, it’s uncertain whether alternative markets have enough demand to fully consume the paper rejected from China.

“The increase from Southeast Asia cannot match the drop in Chinese imports, at least in the near term,” she said.

China is also limiting imports of grades beyond mixed paper.  The country in November told the World Trade Organization (WTO) it plans to limit the amount of contamination acceptable in any recovered fiber entering the country to 0.5 percent in the coming months. The limit is currently 1.5 percent.

“Most recovered paper suppliers in the exporting regions think 0.5 percent is not achievable,” Zhao said.

The country says it will revise its import licensing regulations to prevent paper mills below a certain capacity and brokers from importing recovered fiber. And officials have described plans to reduce the overall number of import permits issued each year.

Chinese authorities have held off renewing import permits since May, preventing many importers from bringing in material during the fall. And as of the webinar, officials hadn’t issued import permits for 2018, actions they usually take in December of each year.

“Now, people believe that the import permits for next year won’t be issued until January or even February,” Zhao said. If that’s the case, “that’s going to pretty much create some kind of chaos in the global recovered paper market in the first quarter of (2018).”

The first quarter also brings the Lunar New Year, which this year will take place in mid-February. That means the recycling system, including mills and material transport, will shut down throughout Asia for a period of time.

Overall, the industry should anticipate more market volatility this year.

“Many details about the new policy stay unknown, and all of this will create great uncertainty to global recovered paper markets,” Zhao said.