Homeboy Recycling’s success in the e-scrap industry spurred its move this summer into a new downtown Los Angeles space, with a warehouse twice the size of its old one.

One of the keys to its growth, in addition to its connection with a strong local brand and good customer service, has been its mission of providing permanent employment for ex-convicts.

“What we have found is that for some of the customers that we have, us having a social mission, it really has been a competitive edge,” said Kabira Stokes, company founder and CEO. “We don’t win every account, obviously, but I think many of our customers are swayed by the fact that we’re trying to create employment in Los Angeles for people who deserve a second chance.”

About six years ago, Stokes founded Isidore Electronics Recycling with the goal of providing employment for those with criminal records. Last fall, the company was acquired by Homeboy Industries, a well-known local nonprofit group serving the same population.

Now known as Homeboy Recycling, the for-profit company last November incorporated as a California Social Purpose Corporation, which gives it flexibility in its pursuit of charitable activities.

Employing 18 people, 12 of whom have done time behind bars, Homeboy Recycling processes about 1.4 million pounds per year. It takes anything that plugs in, except for home appliances.

Stokes recently spoke with Resource Recycling about the growth and evolution of her company, workforce development, weathering down commodities markets, communicating the true costs of recycling and more.

Resource Recycling: Tell us a little bit about the origins of the company that was formerly known as Isidore Electronics Recycling.

Kabira Stokes: Isidore was founded in 2011. I worked in the City of Los Angeles for about three years under Eric Garcetti [who was City Council president at that time] and then went on to University of Southern California for graduate school, and I was very interested in creating jobs in L.A. As we know, the electronics recycling industry is robust, but there seemed to be some room for jobs to be created in L.A. That’s essentially where Isidore came from. We have a social mission and I really wanted to create jobs for people who face barriers to work, specifically folks who spent time in the criminal justice system or who have substance abuse issues. That was where the idea came from. In 2011, we started in downtown L.A., and here we are about six years later. 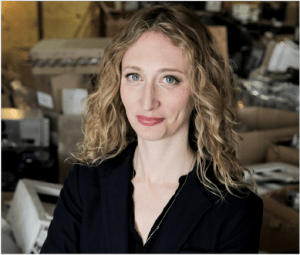 Historically, we hire from nonprofits who are getting people ready for employment, and one of them was Homeboy Industries, which is one of the largest nonprofits that does that sort of work in the country. When we went out looking for financing to grow, interestingly, they were interested in acquiring us. They have a host of social enterprises where they put those people to work, and they thought it was interesting to have a for-profit company in their stable where people could get permanent employment after they’ve been training. Last November, they did acquire us. It’s a great partnership. It’s really working.

Why is electronics recycling a good industry for formerly incarcerated people to work in?

Well, it’s a relatively low skill level to enter into that job, so even if somebody has been away for a while and doesn’t work on a computer, it’s not too hard to take one apart. An entry-level position is demanufacturing. They’re working in a warehouse and they’re taking apart mainly [central processing units from computers]. It’s relatively simple work to understand. People can come in at that super-low skill level, but then there are different career paths they can get onto. It’s one thing to take a computer apart. It’s another thing to put it back together. We have a repair department, a resale department, data destruction, and it’s there that people can actually move up and make a little more money and get more skills.

What are your thoughts on some of the programs in penitentiaries where current inmates are recycling electronics?

It’s not my favorite model. It’s always great when people are getting skills inside and being employed. I have some concerns about the wages that people are paid. And then, is there a pathway for people directly when they come out to utilize those skills afterward?

Tell me a little more about the training and workforce development aspects of what’s now known as Homeboy Recycling.

We will only hire folks who have come out of transitional job training programs. We will not hire anyone with a background of identity theft or fraud because, obviously, we deal with people’s sensitive data. Once someone has completed their transitional job training program in a nonprofit, we’ll take interviews from there and take people on. In general, we start them on the demanufacturing floor, but then, depending on their acumen, we’ll move them along. Can they drive? Are they interested in repair? So we’ll move them on into there.

Along the lines of training and workforce development, do you have advice for other recyclers who may be interested in hiring formerly incarcerated individuals?

Well, they are some of the most loyal employees you’ll ever find, I will say that. When you give people a chance, it’s amazing how they’ll show up for you. Hiring people, no matter their background, is always sort of a gamble. It is really a wonderful thing to have nonprofit partners who will back you up if someone’s housing becomes unstable or something like that. We do have this network of partners that can help us and help our employees if they need support or services. So that’s really been an excellent side effect.

I will also take this opportunity to plug Impact Recyclers. We co-founded that network back in 2015. This is a network around the country of companies whose mission is to hire people facing barriers. We get a fair amount of [business] inquiries … in Los Angeles but also elsewhere, and we are always looking to fill a gap there. We’re also looking for new members, and the goal really is to have a true national network.

I’ve read that about 90 percent of what you guys do appears to be commodities recovery, and about 10 percent is resale. Looking strictly at the business side of it, what are the keys to thriving during difficult times in the industry, including when there’s low commodity values? 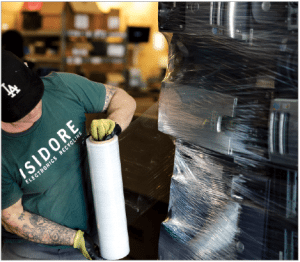 We’ve tried as much as possible to not be reliant on commodity prices. And that has been to really focus on the device repair and resale side of the business. That 90/10 split, that’s not quite the revenue split. It might be weight, but we’re inching toward parity in terms of the revenue split between the two and pushing commodities down as much as we can.

We’re also trying to focus much more on service fees. We really do need to educate the customers that they need to pay the true costs of recycling. I think being R2 certified, also being a certified B Corp, having this social mission that we have, we’re trying to make that argument. And, look, there’s a lot of customers that don’t want to pay fees. When I started the company in 2011, it was a very different commodity market. But I think we did ourselves a disservice as an e-scrap industry by saying, “Sure, we’ll drive across town and pick up whatever you’ve got for free.” It’s not true. It’s not the true cost. We certainly have had to borrow and get a grant here and there to survive, but for us, it’s really been to focus as much as we possibly can on that repair and resale side of things.

We also have this added boost or special bonus of being in Los Angeles, which is that – this is not a huge part of it, but it’s there – we can rent our vintage electronics as props to TV shows. Every bit helps.

In general, we’re just always trying to find the highest, best use of what’s coming through our doors. Since we are not a 100 percent end-of-life recycler, we’re sort of nimble enough to always be picking things out of the waste stream and sort of figure out, “What is the best use for this?”

What are materials that you guys run across that are particularly challenging, and how do you overcome difficulties of processing those materials?

I think that one of the real challenges for us as an industry are solar panels. We get a lot of calls, as those are starting to get off-line, about whether we process those, and we don’t. We don’t have the bandwidth to focus on that yet, but that’s definitely a question for us.

What are some opportunities that have opened up since being acquired by Homeboy?

The Homeboy brand is very strong in Los Angeles. It has certainly opened up customers to us. We’re incredibly pleased with this partnership. We’ve increased our headcount by 50 percent since the beginning of the year. We’re moving into a larger facility in downtown L.A., doubling the size of our warehouse. We’re ready to grow. It’s happening and we’re ready to do it. Being their partner has really been beneficial.

California’s state e-scrap program uses a consumer fee that’s collected by government to fund collection and recycling. What are your thoughts on that model?

We’re a participant. It’s not a huge focus for us. We don’t do the end-of-life processing of CRTs. What I will say is that it clearly is not a perfect system, but I’m very glad that California has it. You read these stories in your publication all the time about these millions of pounds of glass being abandoned. It’s sort of this national emergency that no one is paying attention to. I wish other states would learn and follow suit.

Do you have any other comments you want to share about Homeboy Recycling or advice for the greater recycling industry in North America?

I’ve only been doing this for six years, but I think people can certainly consider hiring a more diverse population and consider hiring folks who have done their time and are ready to come back and be a part of society. I’m happy to talk to anyone who is interested in that. It has had, for us, a lot of positive benefits, both in terms of subsidies out there from the government to hire such folks and then the sort of worker that you end up with.

The other piece is we are here in L.A. and work with companies small and large all over the country that subcontract with us when they need work done in L.A. and we are always available and happy to discuss that with anyone.

Jared Paben is the associate editor of Resource Recycling and can be contacted at [email protected].