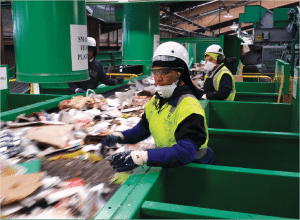 In this section in July, we featured a MRF that hangs over the waters of New York Harbor: Sims Municipal Recycling’s Sunset Park facility in Brooklyn, N.Y.

This month, we travel to the West Coast to explore Recycle Central, another high-tech MRF standing beside the sea. The MRF, which sits on Pier 96 on San Francisco Bay, sorts residential material from the City of San Francisco, population 870,000.

“As others are slowly divesting from recycling plants or potentially recycling in general, Recology and San Francisco feel it’s important to not only maintain recycling infrastructure but enhance its abilities so that more of the materials being discarded can be recovered and put to their next best and highest use,” Recology noted in a statement last fall. 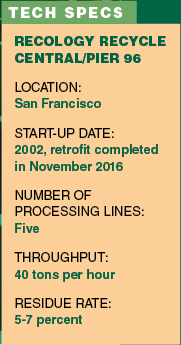 Crews were able to install the new line continuing to operate existing lines. “It was a remarkable achievement,” Recology spokesman Robert Reed said.

The daily maintenance requirements of the new Lubo 440 screens have decreased substantially compared with the old ONP screens because they have fewer wrapping issues.

The new Tomra Autosort optical sorters were installed to sort aseptic cartons, PP and paper, in addition to sorting material coming back in a recovery loop. Both of the units are dual-valve sorters.

The upgraded line is capable of sorting about 630 tons per day, a 37 percent increase over the prior equipment’s capabilities. But in addition to throughput increases, the sorting technologies allow the facility to adapt to the “evolving ton,” a term used to describe the shifting stream of materials coming into recycling facilities.

Recology is currently handling a stream with more small- and medium-sized OCC from online shopping and lighter plastic containers for drinks and food. The optical sorters are allowing for the recovery of an increased variety of items, including smaller ones.

As is the case with many MRFs, films present the top challenge for the Recology operation. San Francisco – and now the entire state of California – have banned thin plastic bags, but many film plastics still show up in the city.

San Francisco-based Recology, an employee-owned company, is one of the largest haulers in the country. It is made up of 45 operating companies that serve customers in California, Oregon and Washington. The Recycle Central/Pier 96 MRF employs around 175 people on two shifts.