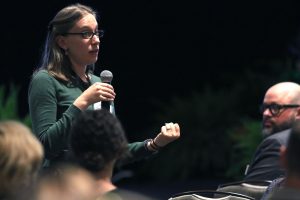 Similar to the material stream itself, the industry is undergoing a shift – one in which basic diversion rates no longer suffice to tell the story about program effectiveness.

During one session at the recent Resource Recycling Conference in Minneapolis, leaders from different realms of materials recovery discussed ways of thinking about measurement, strategies for action based on those calculations, and how that information fits into national data on recycling efforts.

A shift in thinking

With stakeholders throughout the recycling chain calling for a fuller look at the environmental impact of material choices, the nature of measurement is changing, as evidenced in Oregon.

The Beaver State has been an early adopter of sustainable materials management (SMM) policies, which focus on the effects of materials across their entire life cycles. Recycling plays a role in SMM strategies but is not the only tool in the path to sustainability – it’s “insufficient by itself,” said Shannon Davis of the Oregon Department of Environmental Quality (DEQ).

To illustrate, Davis pointed to greenhouse gas (GHG) emissions, which are often integrated into measurement under the SMM system. Even if the U.S. was able to achieve 95 percent diversion of all municipal solid waste and 75 percent of all construction and demolition debris, those efforts would reduce overall GHG emissions within the U.S. by just 6 percent, she said. Material production would still contribute 36 percent of the country’s GHG emissions.

In light of that reality, Oregon is shifting how it measures materials recovery. The state is moving away from focusing solely on the traditional diversion rate of tonnage recovered as a percentage of total waste generated. Instead, the state is including other factors such as energy use.

Davis said Oregon is also “exploring new and different ways to achieve some of the same goals that motivate recycling, namely conservation of resources and reduction of pollution.”

The shift was codified in a document – Oregon’s 2050 Vision and Framework for Action, – that was adopted by a state commission several years ago. Legislatively adopted bills followed the planning document, setting new requirements and goals that municipalities would need to meet.

“In a nutshell, it gave us resources and authority,” Davis said.

How to get there

Municipal programs can benefit from goals and long-term planning, but not all plans are created equal. Goal-setting should be undertaken with some specific factors in mind, according to Jessica Branom-Zwick, a senior consultant with Cascadia Consulting Services.

“It’s kind of like picking the right vehicle for a road trip,” Branom-Zwick said. “Are you going to pick one that will take you very far and is a little easier, like a landfill disposal ban for yard waste, or are you really trying to get to another level, in which case the SUV might be appropriate for you, although it is less fuel efficient.”

She also said a process called diversion modeling can help coordinators sort through choices to develop a plan to meet goals in a cost-effective manner. That means plugging current figures and desired goals into a computer program that provides informed projections about when different methods would lead to realization of specific goals. For communities that lack robust data sets, figures from similar-sized programs elsewhere can be used as a rough estimate.

Effective modeling has to account for a host of variables, Branom-Zwick added, including costs, current waste streams and how new strategies could interact with each other.

Modeling can be a key part of overall program planning, which generally comes down to five steps, Branom-Zwick said: setting goals, determining current figures, identifying strategies to meet the goals, picking the best path and executing the plan.

Branom-Zwick advised agencies to involve stakeholders from an array of backgrounds, particularly in the goal-setting stage. They bring diverse perspectives to the table, she said, and bringing them together presents an opportunity to build early support for a plan.

“If they like where you’re going, they’re more likely to support how to get there,” she said.

As far as the goals themselves, Branom-Zwick noted they can go beyond tonnage diversion targets. They can name reductions in greenhouse gas emissions, such as the work Davis described in Oregon.

But whatever the aim, the goals should be specific. They should clearly identify which waste streams are targeted in the goal and which are not.

Then comes the strategizing. This begins with compiling a lengthy list of strategies to meet goals. The U.S. EPA’s zero waste tool provides 100 possible strategies for various initiatives to boost recycling. The long list can be pared down based on initiatives the community is already effectively employing, determining which would help with the specific goals of that community, and considering the cost.

Those strategies can be run through a modeling program alongside the current figures from the community, producing an educated forecast of how that plan would play out down the line. Modeling programs can provide detailed data that lets a community get into the tons diverted and cost of implementation for each strategy, and figure out what works best for them.

“This type of information is really helpful if your community has to make very tough budget decisions about which strategies to pursue,” Branom-Zwick said.

Each community does things a little differently, and measuring recycling is no exception. For national recycling calculations, that can pose a few challenges.

“Definitions are key,” said Ron Vance, resource conservation branch chief at the U.S. EPA. “There are thousands of different definitions of what diversion means, recovery means, what recycling means.”

For the EPA’s annual “Facts and Figures” report, the agency has made a few changes in how data is collected and presented. On the definition side, for instance, the report moved away from generalities such as “recovery” and “disposal,” opting for more specific language, such as “generation,” “recycling,” “combustion” and “landfilling.”

“There’s a growing dialogue and desire for more consistency across the board,” Vance said.

“There’s this larger universe of LCA data out there; what we’re trying to do is tie WARM into that,” Vance explained.

Asked about the likelihood of future funding for these initiatives given the divergent EPA budget proposals from President Trump and the U.S. House of Representatives, Vance said it’s uncertain how the budget will end up. But he noted EPA recently funded work for next year using current year funds, meaning a lot of the SMM work will continue for the near future regardless of wider budget decisions.