Stakeholders in one southern state are forging new partnerships to recover more clean glass from single-stream programs. The effort is focusing on methodical and affordable MRF upgrades that are already moving systems forward.

Recycling professionals generally agree that market forces over the last six or so years have made it hard to spend money to improve processes at materials recovery facilities (MRFs). These businesses encountered a long commodity downturn while costs rose.

As MRF operators adjusted to the new realities, some turned their focus to glass, one of the lower-value commodities in the curbside recycling stream, and one that can be difficult to process and recover in single-stream systems. Glass was leaking in their systems and not being sorted or captured effectively. Some facilities resorted to removing glass from their menus altogether.

However, despite its inherent difficulties, recent surveys have shown single-stream collection of glass recycling is still an extremely popular service and is enjoyed in greater than 80 percent of the more than 2,500 municipal recycling collection programs in North America. And, when returned to bottles or fiberglass, glass can have a continuing and net positive environmental benefit.

How then can the industry help MRFs handle the material in a cost-effective manner, even when markets fluctuate? This is the story of a unique partnership that formed in North Carolina early in 2016, and of the outcomes being achieved through properly scaled investments in two MRFs. 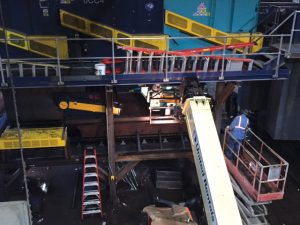 Even so, there clearly has been (and continues to be) room for improvement in how glass moves through the system, especially with single-stream processing having become the norm. At the MRF level, stakeholders have indicated that glass could be cleaned and separated more effectively.

Through its Recycling Business Assistance Center (RBAC), the North Carolina state recycling program established MRF projects designed to improve glass handling as a priority project in its 2015 Recycling Business Development Grant program. Although the state got no takers the first year, it continued to prioritize such projects in its 2016 business grant cycle but with a new twist. Leaders in RBAC and the state’s Department of Environmental Quality (DEQ) were able to work to bring in the support of the Glass Packaging Institute (GPI) in 2016 to demonstrate simple improvements with real returns in glass capture and higher quality at single-stream recycling facilities.

The state convinced the glass industry, through GPI, to tack on additional funding to public grants aimed at improved glass recovery. “From the start, the project looked worthwhile and the process showed that the grant program candidates were chosen carefully,” said Lynn Bragg, the president of GPI. “Our members, the glass industry, want glass recycling to improve, and though we had not done something like this before, the case was made effectively.”

When the 2016 grant proposals came in, two projects emerged as top candidates for the combined funding. Each demonstrated slightly different and very practical approaches in scope and scale, allowing them to act as valuable examples for initiatives in other jurisdictions.

Many smaller single-stream MRFs exist nationwide with limited volumes and geographies, and American Recycling is representative of these community-scale facilities. 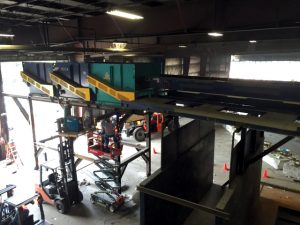 American received grants from the state of North Carolina for $40,000 and another grant from GPI for $20,000. The full investment by the facility, which focused on basic upgrades targeting single-stream glass, was less than $200,000.

Previously at the facility, mixed recyclable material was dropped onto a primary steel-disc screen after a pre-sort. The screen was designed to separate containers from paper, break three-mix glass in the single-stream material and take it to a fines screen with the other containers, where it was ultimately removed. This process was not very efficient in removing a good portion of the glass.

While some material was captured, over a third of the glass traveled over the screens and cross-contaminated other materials (paper, plastic and metal), or ended up as residue to be disposed. Also, mixed paper and organic materials, sometimes wet and sticky, were ending up mixed with the glass.
In the upgrade supported by grant dollars, the facility tuned and adjusted its primary screen, replaced its glass breaker with a larger, more efficient model, and installed a conveying line to an air-assisted glass screen, which removed paper fines and organics. American also installed new glass bunkers to store source-separated glass away from the mixed stream of glass garnered via single-stream.

The company reports that glass capture from single-stream sources has increased from 135 tons per month to 220 tons per month, or just over 1,000 tons more recycled glass per year. Previously, much of that material was going to landfill off the container residue line, or it was contaminating other material. This recovered glass is now going to the Strategic Materials (SMI) beneficiation plant in Atlanta.
Ron Moore, owner of American Recycling, said the company is pleased with the results. The operator is now receiving a better price for its cullet, and the mixed paper quality has also improved significantly, since less glass is contaminating that commodity segment. Prior to the upgrade, the MRF’s mixed paper could only be sold to overseas markets, but now American can sell mixed paper domestically and receives a higher price per ton.

Some of the best practices demonstrated at American include more efficient removal of the glass as soon as possible through a dedicated line, breaking and removing it more efficiently, and cleaning the glass from paper and incidental organics.

A full return on investment for the project is estimated to be seen in three to five years, and the plant estimates its savings at up to $25,000 per year. In fact, American Recycling is experiencing approximately $2,000 in landfill savings per month alone, according to the final grant report submitted to the state of North Carolina.

“The new glass equipment has led to a smoother and faster operation of our single-stream MRF line,” Moore stated. “We have experienced a 50 percent increase in overall throughput following the installation of the equipment because we don’t have to stop for manual cleaning or maintenance. We also are anticipating a reduced maintenance cost overall with less abrasive material running through the entirety of the MRF.”

The second grant project took place at Sonoco Recycling of Raleigh, a regional MRF owned by Sonoco. The $5 billion global packaging and paper company is based in Hartsville, S.C. and operates four MRFs in the Southeast. The Raleigh facility services municipal single-stream recycling programs in Raleigh, Durham and Cary, among other North Carolina cities. The annual throughput of the Raleigh MRF is more than 120,000 tons per year of mixed, mostly single-stream material.

The glass upgrade at the MRF was part of a larger rebuild that cost more than $1 million (the company did not break down the costs of the individual components).

Before the initiative, single-stream material was metered onto a pre-sort conveyor where old corrugated containers (OCC) were removed manually. Material then traveled to the paper screen. Old newspapers, magazines and mixed paper traveled over the screen. Containers dropped through openings in the disc screen, and then to a polishing debris screen, which was not very efficient. Paper then was returned to the paper line.

Meanwhile, the containers traveled to a glass crusher/screen where glass was crushed and removed, and a low-efficiency air system pulled some of the paper off the partially crushed glass. However, the glass at the end of the line was still highly contaminated with paper and organics.

To help remedy the situation, Sonoco received $40,000 in grant money from the state of North Carolina and a grant from GPI for $20,000. The larger upgrade project aimed to increase the MRF’s overall annual processing capacity by an estimated 15,000 tons. It made sense to tackle glass at the same time.

The following steps were taken:

Since the upgrade, glass capture has increased more than 8 percent, or 2,500 tons per year, and glass now makes up about 2 percent more of the MRF’s overall tonnage. This equates to a savings potential of as much $90,000 per year in disposal and improved material value from reduced cross-contamination of multiple grades of paper and plastic.

Patrick McDonald, the plant manager, also reported that by taking the glass out earlier, the facility is seeing less wear on rubber discs and belts and reduced cross-contamination of multiple grades of paper and plastic. Preliminary data also indicates that total glass recovery in the system has improved from the increased power of the cyclone system. “The project has met its goals, and the glass system flows much better,” he noted.

Template for others needing solutions

“Strategic investments in simple technologies and process improvements can improve glass yield and quality in MRFs,” said Scott Mouw, the former head of recycling at the North Carolina DEQ and now a staffer at industry nonprofit group The Recycling Partnership. “That is what these co-funded projects between NC DEQ and GPI have shown.”

These two projects benefited from more effective sizing and removal of glass from upgraded breakers and screens, earlier glass removal in the single-stream separation process, and better glass cleaning from new/upgraded air separation systems that helped remove paper and organics.

American Recycling and Sonoco Raleigh invested and executed these projects in part because they were relatively low cost and easy to implement. And the work provides a valuable template of possible solutions for other facilities.

Over the last two decades, cities and their vendors offering residential single-stream recycling collection services made a bargain between efficiency and materials quality.

Without question, there is a considerable savings on collection by compacting materials and reducing truck hours via single-stream service. In addition, studies have indicated 25 to 50 percent more material (on average) is diverted from landfills with single-stream recycling.

But things have not been so crystal clear when it comes to achieving the quality needed for downstream buyers. The diverse materials generated via single-stream collection must be separated efficiently, or there will be a large and sometimes unacceptable trade-off in quality and quantity of yielded glass feedstock for marketing. Though the single-stream system is not ideal for glass, and may not be right for some markets, making the system better at capturing glass makes sense, and these North Carolina grant projects have identified that it can be cost-effective to do so.

Simplifying the problem through step-by-step process improvement is a stalwart lean manufacturing technique, and it’s an approach that can open the door to positive gains on the recovered glass front.