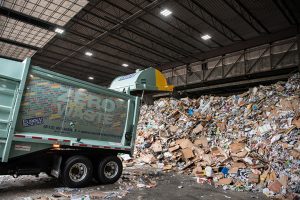 To understand the vision that guides Eureka Recycling, look no further than the very building the organization uses for materials processing.

Eureka’s 120,000-square-foot materials recovery facility previously housed a steel production operation. Eureka, a nonprofit enterprise, was able to clean up and repurpose the site and began operating there in 2004.

That notion of reuse and recover is central to the rest of the entity’s activities. “As a zero waste lab, our MRF and collection operations play an important role in demonstrating that waste is preventable, not inevitable,” the company noted in a statement.

Eureka takes in residential single-stream material from a total of 300,000 households in and around the Twin Cities region of Minnesota.

It serves as both the hauling and processing contractor for the City of Saint Paul, as well as the suburbs of Roseville and Lauderdale. For Minneapolis, Eureka takes in material collected by city crews. That Minneapolis partnership began in late 2016 when the enterprise began a five-year contract with Minnesota’s largest city. 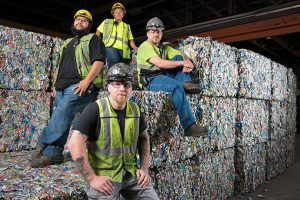 Jerry Bryne (front), who is director of MRF operations at Eureka, and the MRF management team: (from left to right) Jose Hernandez Perez, Marcela Ramirez and Andy Byrne.

The Eureka MRF expects to process 90,000 tons of recyclables in 2017, a total made possible by a recent processing line upgrade that was aimed at boosting throughput. Much of the equipment in the facility comes from Machinex.

The organization says it sees waste prevention and recovery as a means to support workers and bolster the Twin Cities community as a whole.

Eureka has 102 employees working on operations, zero waste program management, policy, education and advocacy. Of that employee total, 35 work directly in the MRF over 12-hour shifts, five days a week. “All of our employees are paid a living wage with benefits and paid time off,” Hoffman stated.

In terms of the material mix at the facility, 60 to 65 percent of the incoming stream is fiber, and the rest is commingled containers.

Eureka’s stated residue rate at the MRF is low, just 6.5 percent. The operator works to limit leakage in the system by re-running material when necessary and regularly analyzing the stream to determine if tweaks should be made.

The enterprise says its work to limit residue extends beyond the processing line, however. “We believe that understanding how residual rates are impacted by program design choices, education and operational systems is a critical part of our work,” Alex Danovitch, vice president of policy and research, said. “And to that end, we are committed to providing transparency and numbers specific to our customers’ material.” 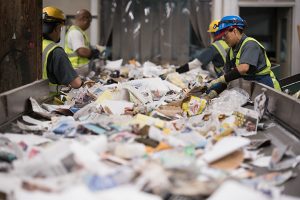 Plastic bags stand out as the most prominent problem material ending up at the facility. The material is not accepted in local curbside programs, but it’s regularly seen in carts anyway. Eureka workers spend around two hours each day removing the items from screens. Other forms of contamination include scrap metal, electronics, sharps, propane tanks and appliances, all of which can seriously damage equipment and pose risks to workers.

To address those concerns, Eureka continues to engage with customers. “We focus on optimizing the environmental, social and economic benefits of recycling by working with our partners to educate residents in order to minimize contamination in the carts,” noted Kate Davenport, co-president, “as well as optimizing our equipment and staffing to maximize the recovery of recyclable materials tipped on our floor.”