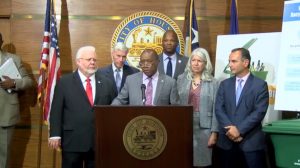 FCC Environmental Services will build a $20 million materials recovery facility in Houston to sort curbside recyclables for at least the next 15 years, under a deal that still requires final approval.

In making the decision, his administration rejected a bid from Waste Management, North America’s largest hauler and MRF operator, to continue serving its hometown.

If approved by the Houston City Council, the contract would also return glass recycling to the city. The contract could cost the city up to $57 million, according to City Council documents. Its duration is 15 years, and provides for a five-year extension.

“When you take a look at what this offers, let me simply say state-of-the-art technology, a brand new facility, including glass, setting and capping the floor at what the city will have to pay if the market should turn down, continuing recycling with glass included, inside the city of Houston, up to approximately 100 new employees being hired at this facility,” Turner said. “Quite frankly, it’s a very, very, very good deal.”

Inigo Sanz, CEO of FCC Environmental, told journalists at the press conference his company is excited to partner with the City of Houston.

“We’re looking forward to building this magnificent facility for this city,” he said. “It will be the flagship of our facilities.”

Last year, with low commodity values, Turner’s administration and Waste Management engaged in a public brinkmanship over the extension of their contract, which allowed the city to tip material at two Waste Management MRFs.

In March 2016, they reached an agreement and approved a two-year deal establishing Waste Management’s processing fee at $92 per ton. Unlike in the previous contract, under which Waste Management said it was losing money, the extension required the city to fully compensate Waste Management when commodity sales fell short of covering processing costs. Additionally, it required removing glass from curbside collections.

Five companies submitted bids for the new contract, which called for glass collection to be restored. The winner, Fomento de Construcciones y Contratas (FCC), proposed a processing fee of $87.05 per ton. Additionally, the amount the city would have to pay FCC if revenues fall short of processing costs is capped at $25 per ton, about the same expense as landfilling locally, Turner said.

“Even in the worst market conditions like we experienced last year, we will never pay more to recycle than we do for solid waste landfill disposal,” Turner said.

Currently, the city has budgeted $2.9 million a year on the program, without glass included; under the FCC proposal, costs would come in at $1.6 million with glass, he said.

Under the deal, FCC would commit to spending more than $1 million for education during the contract’s 15 years. In addition, FCC would loan the City $2.4 million to buy eight collection trucks, helping to upgrade a fleet with an average vehicle age of eight years, Turner said.

Under the terms of the contract, FCC would construct a 120,000-square-foot MRF on 11 acres in an industrial area of northeast Houston. The facility would be larger than FCC’s recently opened MRF near Dallas. It would have a throughput capability of 35 tons per hour.

A MRF with cutting-edge technology was critical to the selection process, Turner said.

FCC would also move its U.S. headquarters from The Woodlands, Texas, a Houston suburb, into the new building, Turner said.

FCC’s MRF would handle all residential material from the city, which current serves 380,000 households with curbside collection. But the facility would also be able to take commercial material in the future, Turner said.

Once the extension was implemented, curbside glass volumes fell by more than 50 percent, Turner said. The last audit showed glass had fallen to 4 percent of single-stream recyclables.

The FCC deal would return curbside glass collection to the city of 2.3 million people, with the company installing glass screens early in the planned MRF’s sorting line.

Next, a Houston City Council committee will review the proposal before it’s considered by the full council later this month. If approved, it would go into effect 14 months later. If the contract is approved in mid-July, Turner said, operations would begin in roughly September 2018.

If the contract is approved, Houston would be the eighth U.S. city to ink a contract with FCC Environmental in the past two years. It already has a contract with Houston to manage biosolids and sewage sludge.