American retail darlings are closing at a rapid rate.

In the last year alone, Macy’s, Sears, Kmart, J.C. Penney, Radio Shack, H.H. Gregg, and Sports Authority each closed more than 75 U.S. locations. Even Walmart has closed more than 250 locations worldwide as it makes an effort to grow its online presence and full-service superstore models.

These retail closings and the continued growth of online shopping are creating a massive transition in the OCC (old corrugated containers) recovery market.

For decades, clean loads of OCC from the back docks of large retailers have served as reliable revenue streams for materials recovery facilities (MRFs) and others. With e-commerce growing swiftly, it’s clear that OCC will remain a prevalent portion of the stream. But the growing tonnages of curbside cardboard are more prone to contamination and sorting challenges than homogenous loads from the back of retailers.

Furthermore, the OCC shakeup is coming alongside ongoing declines in generation of newspaper and other high-value fiber grades. That all means the pressure is on the recycling industry to grasp the specifics of this changing market and then effectively pull more boxes out of the residential stream.

“There is a shift taking place and it’s more from the consumers,” said Ben Harvey of Massachusetts hauler and MRF operator E.L. Harvey. “It’s a question of where is that material going to end up and is it going to be as easy for us to capture?”

Production not falling off

Though many brick-and-mortar retailers may be falling on tough times, the demand for fiber and manufactured corrugate is actually on the rise. With clickable convenience, online shopping’s growth in popularity is only gaining momentum.

According to a 2016 Pew Research Center study, by desktop or mobile, 79 percent of Americans have made purchases online – compared with 22 percent in 2000. In addition, 15 percent of adult shoppers are making an online purchase once per week and 28 percent are making multiple monthly online purchases. In its first-quarter earnings release for the 2018 fiscal year, Walmart noted it saw an e-commerce sales boost of 63 percent.

More evidence of the trend can be seen in numbers from parcel carriers. Since 2009, the U.S. Postal Service has seen delivery growth of packages rise 65 percent. UPS is estimating by 2019 more shipments will be delivered to homes than to businesses.
That’s all driving the need for corrugated boxes – lots of them. In 2016, Freedonia Group, a Cleveland-based industry research firm, conducted a primary study on the future growth in corrugated and paperboard box demand. The research found the demand for corrugate and paperboard is expected to increase 2.6 percent per year to $41.2 billion by 2020.

“There are now more corrugated boxes being shipped to residential households than ever before,” said Martin Davis, president of Midland Davis, a recycling and paper brokerage business based in Illinois. 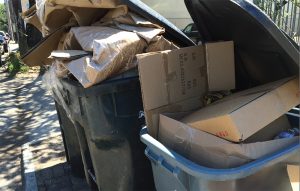 More OCC is showing up in the residential stream as e-commerce continues to grow. But contamination issues and space constraints in curbside receptacles serve as major recovery hindrances.

What’s more, the process of shipping straight to consumers often requires more material overall than what was used in the heyday of retail.

Companies playing in the e-commerce space put significant emphasis on ensuring that products are delivered in a timely and protected manner. According to the American Institute for Packaging and the Environment (Ameripen), replacing a damaged product can cost an e-commerce vendor up to 17 times more than the original cost of shipping – and damage to delivered goods and products is estimated to cost U.S. companies $6 billion per year.

That explains why households receive parcels that bring to mind matryoshka dolls, with packaging structures that include products within “protective” packaging, which itself exists within company-specific packaging. All of that comes inside the outer shipping box.

The demand trend is being bolstered by robust material needs from countries like China and India, where e-commerce expectations are also increasing.

These packaging and shipping trends of course have direct effects on the fiber recovery market.

Also, many upstart and smaller businesses that operate primarily in e-commerce are leasing space in logistic company warehouses, often outsourcing their shipping necessities to those companies too. These order and shipping fulfillment centers have opened avenues to new streams of clean OCC to recycling companies.

“The retail distribution centers are doing more because a lot of these retailers now have a ‘click-and-mortar’ operation,” said Myles Cohen, president of the recycling division at Pratt Industries (a major box-making company that uses 100 percent recycled materials and operates a number of U.S. recycling facilities). “Those boxes may not be coming out of an individual store, but coming out of a retailer’s distribution center. Product is still getting sold and boxes are still being collected.”

Though distribution centers are emerging as an important source for clean fiber, the rising tonnages of e-commerce packaging in the residential stream are also being identified as a key element in the recovery equation. But industry leaders identified challenges in this arena.

When newspaper and office paper made up the bulk of residential fiber, single-stream collection was particularly effective, as those materials are easily compactable.

Capturing OCC via single-stream collection is not quite so straightforward. Some municipal recycling experts have noted curbside carts and bins are often not large enough to contain the amount of corrugate many American households are now generating.

In addition, diverting any type of material from the residential stream requires households to participate in programs and put the right materials in the cart. As industry veterans know, this is easier said than done.

“Retailers have always been really good recyclers,” said Brent Bell, vice president of recycling at hauling and processing giant Waste Management. “Cardboard, for the most part, has also always been a fairly profitable venture for them to be in. If you shift those boxes to the resident side of things, this is where [residents] don’t always share the same priorities as retailers.”

Some communities and recycling operations are beginning to roll out revamped recycling strategies.

In Charlotte, for instance, a new ordinance policy asks residents to break down boxes into 18-by-18 inch pieces. Waste Management, meanwhile, has made efforts to provide more space for residential single-stream recycling, rolling out larger 60- to 90-gallon bins.

Some operators say they are getting enough material.

“We’ve obviously seen a decline in the volume coming in from our commercial accounts, whether that’s traditional retail or big box stores,” said Harvey of E.L Harvey. “On the flip side, and this has been a trend that’s been going on awhile, is the fact we’ve seen an increase on the e-commerce side.”

Another issue in recovery of residential OCC is the role contamination plays during the MRF screening and mill pulping processes.

According to some processors, the glues and labels that are more prevalent on boxes in the residential stream are not much of a problem. “The cleaning systems we have in our pulpers and MRFs do a pretty good job of taking care of that,” said Pratt’s Cohen.

But glass and food residue do cause significant headaches.

“Glass that gets broken is a big issue for MRFs because it gets mixed in with cardboard,” Cohen noted. “There’s only a certain amount of glass you can get out.” He added that his company, which operates 17 U.S. MRFs, has seen a 50 to 70 percent reduction in contamination for the recycling stream as a whole in cities that have eliminated glass from single-stream collection.

Proactive investments in advanced MRF screening and quality assurance technologies have also begun to ease contamination that would degrade OCC. The objective for MRFs is getting corrugate out during the first stages of screening.

For instance, Harvey said his company has installed star screens that remove and separate large and small corrugate at the beginning of the screening process.

“We are constantly trying to predict what the stream of the future will look like,” said Waste Management’s Bell. “We invest in technology for what [recycling] looks like today, and also what that stream will look like in the future.”

It’s important to understand, however, that such equipment upgrades often come at a hefty price. Spending big can be challenging for MRFs amid a changing material stream.

“Costs per ton will go up when they [MRFs] handle less tons and have the same amount of overhead,” noted Davis of Midland Davis.

Still, such investments could continue as processors and recycling programs aim to take advantage of another key factor in the OCC conversation: rising material values.

As e-commerce has become more prevalent, the demand for recycled fiber for corrugate production has seen a significant uptick. And that increase in corrugate demand, both domestically and internationally, has led to substantial price increases.

“The trend has been a rapid rise in the price we’re being paid for our fiber today versus where we were even a year ago,” said Harvey. “It was a steady to slight increase for the first eight months of 2016.” But he said the end of 2016 and early 2017 saw a rapid incline in price.

Many processors have been sharing Harvey’s enthusiasm. With a rise in demand from China, OCC saw historic price increases between April 2016 ($105 per ton) and March 2017 ($185 per ton). Those figures have leveled a bit over the past few months, but prices still remain strong compared with previous yearly averages.

“The market dynamics have the large producers of corrugated boxes announcing price increases in terms of price of OCC boxes,” Pratt’s Cohen confirmed.

If markets and values for OCC remain robust, it seems certain programs, processors and other stakeholders will work hard to ensure it gets recovered – regardless of whether the material is showing up in distribution centers, the residential stream or anywhere else.

Chris Fleck is a freelance writer, field journalist and media educator. He covers topics on sustainability practices, environmental issues, health and wellness, travel recreation, and anthropology. He can be contacted at [email protected].