The big upsides from breaking down bales 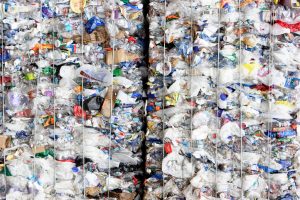 “Let’s say they get something like window trim and they throw that in the bale – it’s all big plastic, right?” Janson explained in a recent interview. “If we don’t say anything and he does it for a couple of loads, it’s all good in his mind. He might go out and get more trim. But all the while it’s a yield loss for us.”

To avoid those expensive downward spirals of contamination, QRS and other U.S. plastics recycling stakeholders are starting to ramp up efforts to track and measure the specifics of the bales they handle. Developing an understanding of the quality of material coming in the door has always been an important part of successful plastics recycling. But data-management technology, export uncertainties and competition in the market have of late pushed plastic-bale auditing to new heights in North America.

QRS, for example, documents the bale yield details for each incoming load and then uses that data to determine what partner companies will be paid in the future. Alabama-based reclaimer KW Plastics takes it a step further on its polypropylene line, reducing the price per pound it pays for a given load if contamination is higher than a certain threshold.

At the same time, one large materials recovery facility routinely audits the bales of mixed plastics it receives from other companies to make sure such partnerships make financial sense. And one industry firm is rolling out technology to photograph and analyze every bale within its wide-ranging recovery network.

Such efforts help to curtail quality problems before they get out of control, and that step could become increasingly important as China continues its National Sword crackdown of low-quality imports. In addition, the proliferation of material information carries larger possibilities for plastics recycling as a whole.

“There’s no bad material, there are only bad buys,” Janson said. “The onus is on us to determine what that yield is. … It translates all the way down to the curb and the MRF. It makes the system better.”

‘Needed quality to be cleaned up’

The concept of analyzing and documenting plastic-bale contents became a whole lot more important for many companies in 2013.

That’s when China instituted its Green Fence customs initiative and reclaimers and other industry players started to realize mixed plastic bales would need to be given significant attention if they were going to actually move to a buyer.

KW Plastics was one of the companies that saw that market shake-up as an opportunity, and over the past four years, the reclaimer has aggressively moved forward processing polypropylene (PP) that previously may have ended up in mixed bales going overseas. The main challenge in launching that initiative was material quality.

“[Sellers] weren’t as particular about what was going to China,” said Stephanie Baker, KW’s director of market development. “We couldn’t process bales in that form. We had demand – we just needed quality to be cleaned up.”

Pricing became the reclaimer’s strategy for ensuring better bales. KW processes PP material on a truckload-by-truckload basis at its Troy, Ala. facility. Each load is weighed on the front end and then moves through a float-sink process in which the targeted PP floats and contaminants “sink out.”

Each load is weighed again at the end of the line, and if contamination is greater than a 5 percent threshold KW has established, the price paid to the supplier for that load is adjusted accordingly. Currently, KW receives PP loads from between 40 and 50 MRFs each month.

A pricing paradigm that correlates directly with contamination is extraordinarily unique in plastics recycling, and KW has been able to pull it off in large part because the reclaimer pioneered the practice of buying PP-only bales (the company does not utilize the approach on its HDPE line).

But Baker also said the company aims to maintain an open dialogue with MRFs and other suppliers when it comes to contamination and pricing, and KW offers suppliers full contamination reports that include bale photos, weights and the specifics on sink-out materials.

“It’s been understood across the industry for a while we have this 5 percent allowable,” Baker said, noting that most suppliers are eager to know their load details because oftentimes the contaminating material is actually PET that could be profitably moved to other markets. “It’s not so much a slap on the wrist so much as it is awareness they are losing value.”

The yield measurement system employed at the QRS plants in St. Louis and Baltimore operates in a similar fashion. A section of each load is weighed at the start and end of the process. Janson said the price paid to a supplier for a given load is not directly tied to the weight data. However, QRS staffers do note the yield details for each load, and the company uses this evolving database to determine price specifics in contracts for each of its partners going forward.

Janson admitted he’d “much prefer the KW model” but because his plants take in bales containing a wide variety of material – the Baltimore operation targets loads of plastics Nos. 3-7 – the process of determining bale composition is a bit more complicated. However, he thinks reclaimers aiming to capture plastics other than PET and HDPE will continue to push the envelope in this area.

He used some hard numbers to make his point. Janson said that if a mixed plastics processor averaged eleven 40,000-pound loads a day and then started seeing bale yields that were 5 percent lower than what was expected, the company would be $5,500 off its revenue projections daily.

More sophisticated bale tracking is also starting to happen at other points in the plastics recycling chain.

Avangard Innovative, based in Houston, manages recycling programs for large commercial generators, including manufacturers, retailers, logistics companies and more. In its 30 years in business, the company has seen a number of the inefficiencies within the industry, said CEO Rick Perez. Avangard moves bales throughout the 14 countries the company operates in, but has never been able to see the quality of a bale until it’s received for processing.

With that deficiency in mind, the company recently developed a monitoring system called “Sustayn,” which Perez described as waste and recycling optimization software. With equipment such as cameras and scales retrofitted onto balers and other machinery, and the collected information sent via cloud technology to a data analytics center, the system provides a new level of transparency across Avangard’s operations.

The technology takes a unique approach by monitoring bale creation at commercial generators, rather than solely at the processing level. Retail outlets, manufacturers or other Avangard commercial clients who are not in the recycling business would install the monitoring gear in their baling operations, providing data from the source of the material.

The software is looking specifically for events during bale preparation that deviate from the norm. For example, if a plant produces one bale less than it usually does, that information is captured. The monitoring system photographs materials at the baler, providing a look at the quality of a bale before it’s received by a customer. The system produces data covering the actual weight of each bale, the date and time it was made, the quality of materials inside it and its destination.

The utility of this kind of technology comes down to one simple principle, Perez said: Accurate data provides information that can be used to take action.

Plastic bale monitoring is evolving at the MRF level as well.

In 2013, a number of factors, including China’s Green Fence quality crackdown and the opening of the Brooklyn MRF, led Sims to phase out its 3-7 mixed plastics bale production, install optical sorters and set its sights on a higher-quality bale, according to Maite Quinn, business development and marketing manager for Sims.

The company began sorting out and baling polypropylene from its own mixed bales to sell to KW, and it started buying 3-7 and 1-7 bales from third-party haulers, also with the intention of isolating PP.

That’s where the auditing concept came into play. The company realized no two 3-7 bales were the same, and it wanted more information on what they could expect from different suppliers.

Once per quarter Sims began opening up incoming bales from each seller to get a baseline of polypropylene content. “I base my prices off those audits,” Quinn said.

As plastics processors and others become more serious about measuring bale quality and using those details to frame relationships with suppliers, it’s certainly true they could risk alienating some potential partners. Janson of QRS said his company gets stung when the export market heats up.

“You do tend to lose volumes sometimes,” he said.

But at the same time, many suppliers appreciate the feedback from reclaimers. And those that have clean material are eager to be rewarded for their efforts.

“We would rather have them price based on our quality,” said Alan Handley, CEO of Chicago-based hauler and MRF operator Lakeshore Recycling. “As a MRF operator, that forces us to keep our quality up. The plastic reclaimer has the same concerns as everyone else: Know your supplier and price according to quality.”

And MRFs aren’t the only stakeholders that can gain from the feedback being generated by plastic bale auditing.

Baker of KW said that because the company has been paying such close attention to contamination details to determine pricing, the KW team is able to identify issues in container recyclability. For instance, labels are one segment of the stream the reclaimer hopes to see end up in the contamination side at the end of the process: If labels come off in the float-sink process as they are supposed to, they will sink out and not sully the recovered PP.

However, KW has found in some instances that certain labels consistently remain on the products. In one case, the company worked with the Association of Plastic Recyclers to reach out to the label manufacturer. Similar conversations with other plastic packaging brand owners have been sparked by KW’s ability to document which containers are ending up in PP bales and then what happens to those containers during processing.

“Sometimes when a material sinks out, we send it to the lab,” she noted. “It could be PP, but maybe it has a lot of filler in there. … [The process] does help us with paying only for material we’re actually using. But it also helps MRFs, brand owners and label makers.”

Avangard’s Perez said many transactions in the market are still are based on generalizations, without specifics on color, impurities or other attributes. By developing deeper data on incoming material, plastics processors can only help themselves. And if reclaimers run as efficiently and profitably as possible, that bodes well for the rest of the industry.

“If I can see the quality of what’s coming out of it, I can have a true discussion about price,” Perez said. “At the end of the day, it’s true accounting.”