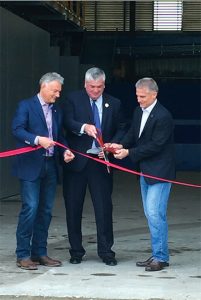 Once known as the “Egg Capital of the World,” the town of Petaluma, Calif. is where the egg incubator was invented. It also once had the world’s only drugstore meant exclusively for poultry.

The local recycling processor just hatched a long-incubating egg as well: a new materials recovery facility (MRF) capable of boosting the area’s already-high diversion rate. Republic Services recently announced the opening of the facility at the Central Landfill just outside of Petaluma, in California’s Sonoma County.

The county has a goal of 90 percent diversion by 2020. It says the MRF is a key component of helping it boost its diversion rate, which was at 75 percent as of 2014.

Republic Services of Sonoma County upgraded an existing 32,000-square-foot recycling center with a 6,000-square-foot addition, built by ET Environmental. The project added a system for dry commercial materials, including OCC, mixed paper, containers, films and other plastics, as well as one for construction and demolition debris.

Incorporating both automated and manual sorting, the new system includes size-reduction equipment, screens, conveyors, a baler and a covered storage area for bales.

The system, which is capable of sorting 240 tons per day of commercial material, was designed and installed by San Diego-based CP Group.

“The … enhanced recycling center offers significant environmental benefits to the community and the customers we are fortunate to serve,” Mike Caprio, area president of Republic Services, stated in a press release. “We now have the ability to increase recycling efforts while diverting valuable materials from the landfill. The facility has the potential to significantly reduce greenhouse gas emissions, which offers a substantial contribution to the community’s climate protection goals.”

The facility was part of a years-long collaborative process involving multiple municipalities, the county and a diverse group of public stakeholders.

The partners identified three streams that were being sent straight to landfill disposal and could benefit from a MRF: self-haul, commercial dry waste and C&D. The county previously estimated the MRF could divert 60 percent or more of those streams.

Republic is the second-largest publicly traded hauler in North America. Republic Services of Sonoma County, which also runs the county’s landfill and transfer stations, employs 26 people. It serves over 265 commercial customers and thousands of residents.

In April 2015, Sonoma County government transferred the operations of the Central Landfill and transfer stations to Republic. As part of the deal, Republic agreed to fund the new MRF, previously estimated to cost up to $5 million.

The Republic Sonoma County MRF will employ up to 30 people, not including administrators, working one to three shifts per day, depending on need.

The recent upgrade to the Sonoma MRF added 6,000 square feet of space, making room for system targeting a variety of materials.

Posted in MRF of the Moment, Resource Recycling Magazine | Tagged May 2017 |