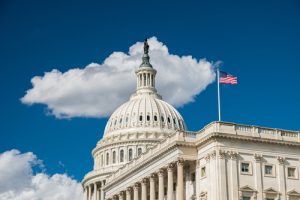 Recycling organizations will try to sell Congress on the economic and environmental benefits of the U.S. EPA’s Waste Minimization and Recycling program, which is cut in President Trump’s proposed budget.

An initial budget document released in March made clear that EPA would be targeted by the new administration for cuts. But the official proposal released last month, titled “A New Foundation for American Greatness,” included appropriations reports containing much more detail about how those cuts would pencil out for specific programs.

A brief note links the cut to a wider back-to-basics directional focus the Trump administration has established for EPA.

“State and local entities or industry groups may elect to continue work to reuse and recycle materials,” the appropriations report states, adding that EPA “will focus on core environmental work.”

From here, both the House of Representatives and Senate will pass budget resolutions that set limits for spending but do not get into program specifics. Appropriations committees and subcommittees of each chamber will delve into program funding and come up with budget bills, which go back before each full chamber for floor votes. Once both the House and Senate have passed their own budget bills and have worked through the differences between the two in a conference committee, the final budget goes to the president for a decision.

Ideally, that all happens before Oct. 1, when the new fiscal year begins.

With more detail on which programs are in danger of losing funding, the lobbying will begin.

Billy Johnson, chief lobbyist for the Institute of Scrap Recycling Industries (ISRI), said the Waste Minimization and Recycling program performs important work for the recycling industry as well as companies that use recycled materials.

ISRI’s goal will be to “make (lawmakers) aware that these programs are really not very much money but they have a terrific impact on manufacturing as well as environmental protection,” Johnson said. “I think they’ll be very willing to listen to that.”

Lobbyists will point not only to the environmental benefits, but to the economic impact of recycling, including job creation, municipal savings from avoided tip fees and the recycled material returning into the market to generate further commercial activities.

“I don’t think that they are connecting the dots, and I think that’s our job, is to try to help them connect them,” Johnson said. “I think when they do, they’re going to say, ‘Oh yeah, we need to be helping there.'”

Johnson noted that the budget will certainly not move forward as written, since “all presidents’ budgets are dead on arrival.” Still, if the Waste Minimization and Recycling program were to be completely eliminated, Johnson said MRFs and curbside programs would be hurt the most. The majority of post-industrial recycling would not feel an impact, he said, but aluminum, paper and plastic would take a hit because EPA supports municipal collection programs.

“Some of those programs are, I wouldn’t say ‘propped up,’ they’re just helped by it,” he explained.

Few politicians have specifically addressed the recycling-related implications. Johnson said there are members of Congress who “definitely understand how important recycling is for steel, aluminum and paper and will be making that push.”

The Congressional Recycling Caucus was formed in 2006 with support from ISRI. In a statement to Resource Recycling, U.S. Rep. John Shimkus, R-Ill., co-chair of the House recycling caucus, noted EPA’s recycling efforts among those that should be prioritized.

“While the administration is absolutely right to request an overall decrease in funding for EPA, it is our responsibility on Capitol Hill to ensure that specific programs are funded at levels consistent with authorizations,” Shimkus said. “As we work through the budget process, Congress should prioritize programs – particularly site remediation, technical assistance, and recycling programs – that not only improve our environment but that also generate economic benefits.”

Sen. John Boozman, R-Ark., co-chair on the Senate side, declined to speak to specific cuts because the budget is still only a proposal. In a statement, he noted this is only the beginning of the process, adding that “Congress has the power of the purse.”

Other ranking members of the recycling caucus did not return inquiries.

Although the budget is likely to undergo many changes, the initial proposal is notable for signaling the administration’s priorities. Scott Pruitt, who took over as head of the EPA in February, has emphasized shifting environmental regulatory responsibility away from the federal level.

An overview of the EPA budget proposal explains that “responsibility for funding local environmental efforts and programs is returned to state and local entities, while federal funding supports priority national work.” That could put some states in a financial bind.

“They’re going to have to do a lot of what the government’s paying for,” Johnson said. “A lot of states have relied on the EPA to do a lot of the environmental protection work for them.”

“If you’re in Arkansas they could enforce the same law or regulation very differently than they do in Texas, or Missouri or California,” Johnson said. “The regions provide a lot of overlay to keep things more or less consistent between those states and the regions.”