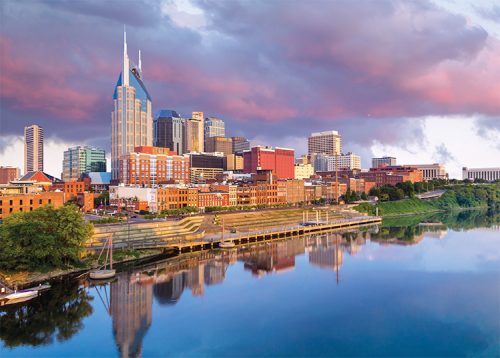 It may be known as the Music City, but Nashville is also shooting for another designation. The municipality made recent headlines when city leaders announced a goal to become the “greenest city in the Southeast.”

And increased recycling was among the goals a “Livable Nashville” committee recommended striving for. Nashville should aim to raise its residential and commercial diversion rate to 35 percent in the next three years, 50 percent by 2030 and 100 percent by 2050, the committee said.

Those are draft recommendations, said Sharon Smith, special project manager in the Department of Public Works, but will be used as a roadmap for an upcoming solid waste master plan that aims to improve and enhance the city’s three-decades-old recycling efforts.

Nashville launched a curbside recycling pilot program in the early 1990s, providing recycling carts to residents in certain neighborhoods. Aiming to explore the feasibility of expanding the program to a wider service area, the pilot project stretched on for a decade. 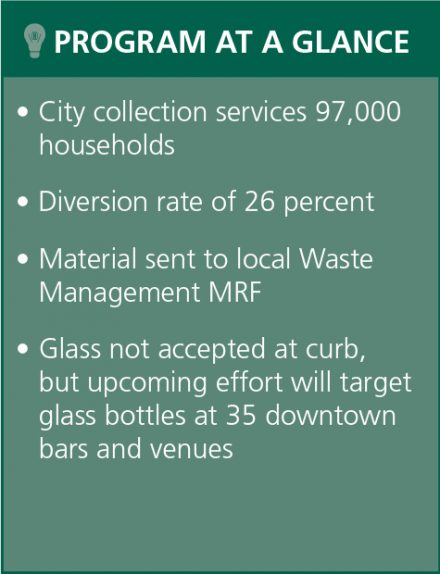 Then, in 2000, the city ended all curbside recycling, aiming “to put together a comprehensive curbside recycling program that would be throughout the service area,” said Smith. Two years later, that program rolled out to households in what’s known as the Urban Service District (USD). This area generally extends out from the city center, and residents in the USD pay higher taxes for more services, including recycling.

Recycling is funded out of property taxes, and it doesn’t appear as a line item on tax bills. That fact sometimes leads residents to believe the service is provided free of charge, Smith said.

As of February, the USD had more than 97,000 households receiving recycling collection, all of which is carried out by Department of Public Works staff. Outside the USD is the General Service District, in which households or homeowners associations must contract separately with a private hauler.

The 96-gallon carts provided to residents in the USD are collected once per month, relatively rare in municipal programs. Smith said the city is aiming to bring in more frequent collection, noting that “once a month is hard for people to develop a habit around.”

Although there’s no general mandatory recycling requirement, though cardboard, yard debris and e-scrap are banned from disposal.

The city’s recycling program collects standard single-stream materials, with the notable exception of glass. Unlike many municipal programs that have discontinued glass collection over the years, Nashville has never accepted glass curbside. It’s not as much about the market dynamics, Smith said, but rather about glass shattering and contaminating other recyclables, like fiber.

Some companies have sprouted up to offer private curbside glass collection, and residents can also drop off glass at various collection centers around the city.

During the city’s 2016 fiscal year, the last full year period of compiled information, the city tallied a 26 percent diversion rate, with Public Works crews collecting more than 55,000 tons of material. That figure includes more than 26,000 tons of yard debris.

Besides curbside service, Nashville also has 16 drop-off sites for recyclable materials, some of which accept e-scrap, bulk materials and household hazardous waste. The drop-off centers collect slightly less than the curbside program each month; in February, for instance, the drop-off center tonnage was about 713 tons compared with the 869 tons collected curbside.

All of the recyclable materials are sent to a Waste Management MRF, which the city contracts with through a revenue-sharing agreement.

Heading to the honky-tonks

Nashville is known nationwide for its numerous honky-tonks, so it’s only fitting that the classic live music joints are the subject of an upcoming recycling initiative, one focused on recovery of glass bottles.

The city’s downtown core has grown significantly in recent years, and with it the amount of material disposed. Back in 2000, the city collected trash from commercial locations downtown once a day, six days per week. Now, it’s collected three times per day, seven days a week.

One of the major material streams is glass, and with no glass recycling collection, it all gets thrown away.

Ryman Alley is one of the most famous parts of the downtown district, home to the “Mother Church of Country Music.” The bars on the alley serve beer in longneck glass bottles.

Ryman’s popularity means it generates a significant amount of glass: Several years back DPW audited disposal on that alley on one Friday night, and found glass made up 65 to 70 percent of the waste stream. 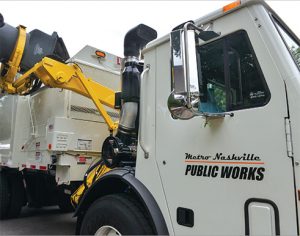 During the most recent fiscal year, Nashville city crews collected 55,000 tons of recoverable materials. Yard debris accounted for almost half of the weight.

Mayor Megan Barry later drove with a Public Works crew to observe one night, took note of the substantial amount of glass being discarded, and decided options should be explored for addressing the glass problem.

“We will roll out the honky-tonk glass bottle recycling program at about 35 establishments in our downtown core,” Smith said. “And we’ll probably collect more bottles than we collect in our drop-off program, because there’s just such a massive volume of bottles.”

Part of the population growth in the downtown area is due to more tourism, and the city is looking at the glass recycling program with that connection in mind.