Community Spotlight: Asking residents to sort? One city’s done it for decades 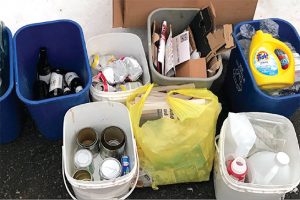 As more and more communities switch to single-stream recycling collection to increase participation and material volumes, a New Jersey city is holding on strong to its source-separation system.

And the municipality’s recycling coordinator believes the approach is the key to community-wide sustainability.

Clifton, N.J., like all municipalities in the state, was required to offer recycling services after state-level legislation passed in 1987. State guidelines asked each municipality to shoot for 15 percent diversion in 1989 and to hit 25 percent by 1990.

“Which maybe sounded [like] a lot to many communities, but where we were in North Jersey, there was a lot of recycling already going on,” said Al DuBois, Clifton’s recycling coordinator. 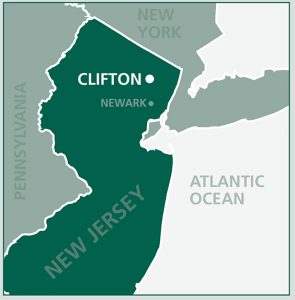 To attain its goals, the state mandated that each city begin either a curbside collection or drop-off recycling program. Clifton ended up with both, and by 1990, largely due to recycling efforts that were happening previously but hadn’t been tabulated, Clifton hit 34 percent diversion, substantially surpassing its target rate.

“It was a matter of mailing out letters to businesses and telling them, ‘It’s mandatory, start reporting your tonnage to us,’” DuBois said.

Also in 1990, James Florio became New Jersey’s governor, and his administration raised the diversion target to an ambitious 60 percent by 1995. Through a separate executive order, Florio, a Democrat, also postponed all waste-to-energy incinerator construction.

Clifton has taken that recycling message to heart. With nearly 90,000 residents making up 30,000 households, Clifton in 2015 collected more than 46,000 tons of materials, a figure that includes recyclable items, yard debris and food scraps.

Recyclable materials made up about 4,300 tons of that figure. DuBois estimates Clifton holds an overall diversion rate of between 45 and 50 percent, although he said he doesn’t put much stock in percentage figures. He noted they vary based on how the metric is defined so it can be misleading to compare communities using rate figures. 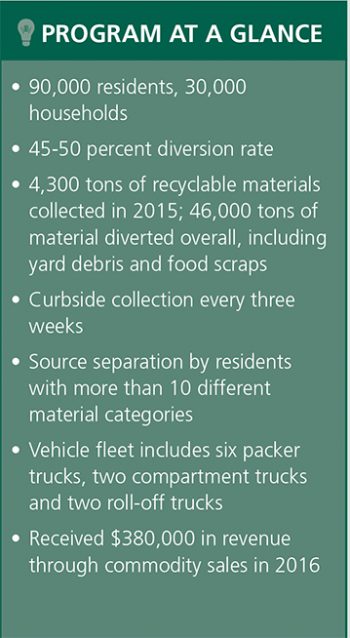 Unlike most municipalities that pick up recyclables weekly or every-other-week, Clifton’s curbside program has collection once every three weeks. And residents are required to source-separate their materials.

DuBois points to the source separation, and the commitment of Clifton citizens to put in the work required, as a large factor in the city’s recycling success.

The city’s Department of Public Works provides collection service, and garbage is picked up twice per week by a private hauler. Using a fleet that includes six packer trucks, two compartment trucks and two roll-off vehicles, city crews take the collected materials back to the public works yard.

The clean supply of materials from source separation means the city has a marketable product, without much further processing necessary.

“It’s all separated, and we receive revenues for each commodity,” DuBois said.

The city collects more than 10 different materials separately, all of which are either marketed or composted, DuBois said. Finished compost is made available to residents for free.

Clifton is well-positioned by its proximity to local markets, although DuBois noted market geography has shifted. When the program started three decades ago, there were more than a dozen nearby processors and MRFs, DuBois said. Now there are only a few, despite a push in the 1980s to increase local end markets for materials. Still, through its sales of recycled materials over the years, combined with recycling grant money from the state, Clifton has grossed about $10 million since launching its program.

The state grant money comes through what’s known as a municipal recycling tonnage grant. Funded by a $3 per ton tax on all solid waste accepted for disposal or transfer at New Jersey solid waste facilities, the program makes available grant funds for cities based on how much they recycle each year. Last year Clifton received about $180,000 through the grant program, and $380,000 in revenue from the commodity sales. 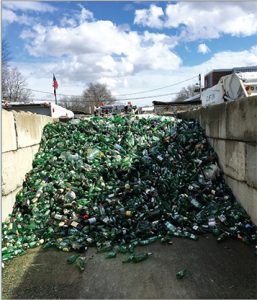 DuBois describes Clifton as a truly sustainable community due to its recycling program. Because the city is collecting and marketing each commodity separately, he can show exactly where materials end up.

“Those 11 to 15 items at the curb are all going back into the proper recycling or sustainable method it’s supposed to go into,” he said.

As for the future? DuBois thinks the state needs to look to the past to ensure progress in recycling. He pointed to Gov. Florio’s ambitious goals in 1990. “His document is fantastic,” DuBois said. “Let’s go revisit it.”