HDPE plastic prices fall in May 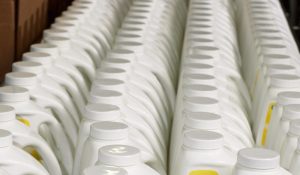 The value of baled natural HDPE containers has come down from its recent high, with May pricing slipping to about 33 cents per pound (truckload of bales picked up in the eastern portion of the U.S.). This represents a dip of about 10 percent. Colored HDPE bottle prices declined at a steeper rate, sliding about one-fifth to about 20 cents per pound.

That said, sellers of PET bottles saw May pricing stay consistent around 14 cents per pound.