Assessing the ROI of EPR 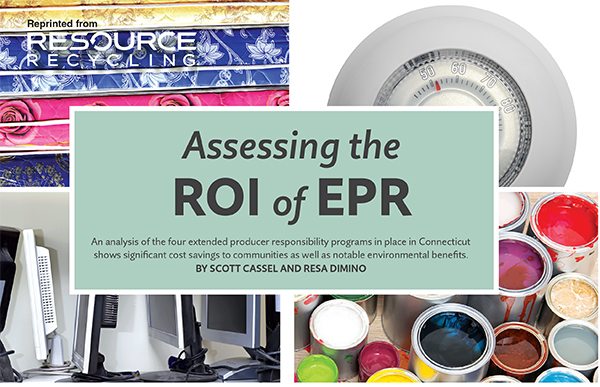 The nation’s 100th extended producer responsibility law passed in 2016. That is a sharp contrast to the start of the EPR movement in the U.S. in 2000, when only eight laws were passed by seven states, and all focused on batteries.

In EPR systems, a government mandates that manufacturers within a product category take responsibility for post-consumer management of the given product and its packaging. There are two related features of EPR policy: (1) shifting financial and management responsibility, with government oversight, upstream to the manufacturer and away from the public sector; and (2) providing incentives to manufacturers to incorporate environmental considerations into the design of their products and packaging.

As of this writing, a total of 104 EPR laws are now in place in 33 states and cover 12 product sectors, and state and local governments continue to propose EPR legislation throughout the U.S. While we have paid close attention over the years to specific program successes and challenges, systematic statewide evaluations of the laws have been fragmented.

However, in 2015, the Connecticut Department of Environmental Protection (CT DEEP) retained the Product Stewardship Institute (PSI) to closely examine the state’s EPR programs and articulate their effect on the economy and the environment. Between February and October 2015, PSI conducted a multi-faceted analysis of Connecticut’s four EPR programs: electronics, mercury thermostats, paint and mattresses.

The results demonstrate significant gains for the state of Connecticut. The four EPR programs together diverted more than 26 million pounds of material from waste, yielded a cumulative cost savings of more than $2.6 million per year to Connecticut municipalities, and provided additional services worth another
$6.7 million.

Additionally, the four programs led to the creation of more than 100 jobs and reduced greenhouse gas (GHG) emissions by more than 13 million kilograms of carbon equivalent, equal to the annual emissions from more than 2,300 passenger vehicles. Furthermore, nearly all Connecticut residents now have convenient access to collection sites for the target products.

Connecticut’s electronics EPR program provided the most profound benefits in terms of job creation, cost savings and diversion. This law emerged from the national discussions PSI sparked in 2000 and is based on a model created by the Northeast Recycling Council. Total e-scrap recovery increased steadily from 3.7 million pounds in 2009, prior to program implementation, to 18.6 million pounds in 2015 (see Figure 1 below).

Connecticut residents also now enjoy more convenient e-scrap collection sites. Before the state implemented the EPR program, there were 86 electronics collection sites. That number increased to 273 by 2014, with nearly 92 percent of municipalities that collected having at least one permanent site in place. Interestingly, data from the PSI evaluation, as well as from a survey compiled by the Electronics Recycling Coordination Clearinghouse, point to resident preference for collection sites operated by local governments. Only about 10 percent of the electronics recovered in the state came through programs operated by manufacturers, which collect at Best Buy, Goodwill, and Staples in a system that runs parallel to the state EPR program.

The e-scrap program provides equally significant financial benefits to Connecticut municipalities. In 2014 alone, the program reduced municipal disposal costs by more than $500,000 per year. That figure only includes avoided disposal costs; in addition to those savings, the program provided financial benefits in the form of no-cost recycling services, worth an additional
$4.4 million. The program also acts as a job creator, with 80 recycling jobs supported by the program as of mid-2016.

Connecticut’s thermostat EPR program demonstrates the value of implementing a mandatory program even when a voluntary system is already in place. The state’s EPR law plays a critical role in protecting the environment through the diversion of mercury, a toxic material. Removal of mercury from the waste stream prevents its emission from all downstream processes regardless of location, including waste compaction and transport, waste to energy, and landfilling. 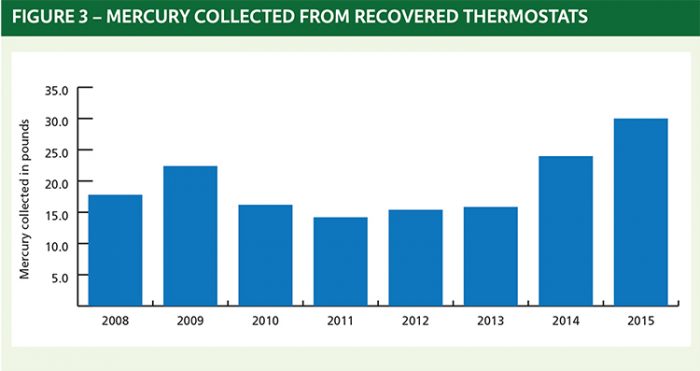 While analysis of pre-program collection convenience is not complete, the evaluation did determine that 51 new thermostat collection locations came on-line in the state as a result of the mandatory program, providing 121 total sites throughout Connecticut.

Connecticut’s thermostat law is loosely based on PSI’s national model and would reap further benefits from the addition of a mandatory financial incentive program, similar to the Vermont and Maine thermostat EPR laws, which provide $5 to residents for each thermostat returned. Due in part to this incentive, Vermont and Maine respectively recovered 34.8 and 32.8 thermostats per 10,000 residents in 2014, more than three times the number seen in Connecticut.

The passage of Connecticut’s paint EPR law in 2013 led to an immediate and substantial increase in recovery, particularly in latex paint. This law is directly based on a national model EPR program mediated by PSI with the paint industry, state and local governments, the U.S. Environmental Protection Agency, recyclers, and other key stakeholders. The resulting “eco fee” financing mechanism, key to the national agreement, is the first product stewardship system in the U.S. that is consumer-funded but industry-managed.

In 2010, prior to the implementation of the paint program, Connecticut recovered 149,000 gallons of paint, virtually all of which was oil-based. By the third year of the program (FY2016), recovery had more than doubled to 320,000 gallons, equivalent to half of the leftover paint generated that year in the state, with the majority classified as latex paint. More than 80 percent of the collected latex paint was reused or recycled back into new paint, and all of the oil-based paint was blended into a fuel substitute.

The latex paint recycled through Connecticut’s program led to GHG emission savings of 188,619 kilograms of carbon equivalent in 2014 alone, comparable to the annual emissions from 40 passenger vehicles, and saved 4.4 million gallons of water and 8.7 million megajoules (MJ) of fuel energy.

Perhaps most dramatic is the increase in convenient collection sites. In 2011, the state had only eight paint recycling locations; by the second year of the program (FY2015), residents had access to 140 sites, nearly 50 of which are at paint retail locations. Virtually all Connecticut residents now live within 15 miles of a paint collection site.

The paint program also boasts remarkable cost savings and financial benefits. Local government paint management costs dropped by about $623,000 per year after program implementation (see Figure 4 below). By providing public outreach and education, as well as paint transportation, processing, and recycling services, the program provides financial benefits to local governments and taxpayers, which in 2014 were worth $2.3 million.

The paint program is the second-largest job generator of Connecticut’s EPR programs; it created 21 jobs in the recycling sector as of 2014 and was projected to create an additional 18 jobs in 2015. 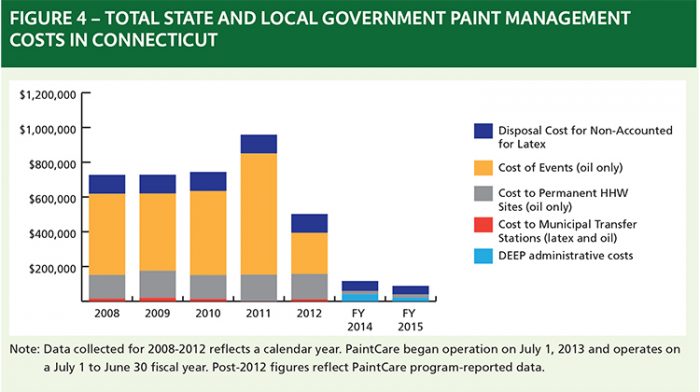 Mattress effort first of its kind

Connecticut’s mattress EPR law – the state’s newest product stewardship program – represents the first in the nation and was developed jointly by CT DEEP, Connecticut local governments, recyclers, PSI and the mattress industry. The program launched in 2015, in the midst of this evaluation. Even in those early days, PSI documented strong results. In 2014, Connecticut recycled only 8.7 percent of discarded mattresses. In 2015, the first year of the mattress EPR program, that rate jumped to 63.5 percent, with local government and taxpayer savings projected at nearly $1.5 million.

Before the mattress EPR program was in place, Connecticut had 158 sites that collected mattresses separately from waste, but only 30 of those provided any mattress recycling services. Under the EPR program, the number of sites collecting mattresses for recycling is expected to increase to 134. Due to the increased recycling rate, the mattress program reduced GHG emissions by 4.2 million kilograms of carbon equivalent, equal to the emissions from 857 passenger vehicles, and saved 48.7 MJ of fuel energy (see Figure 5).

Time to assess other initiatives 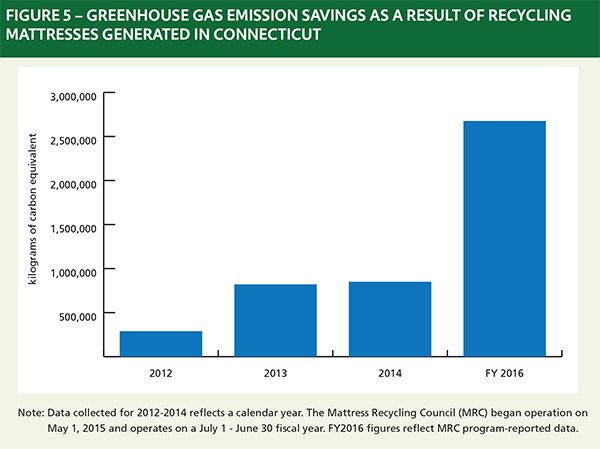 But not all EPR laws are equal, and not all are implemented and enforced equally. Moving forward, state and local governments, and their industry partners, should enact EPR laws that most effectively address jointly defined problems, taking into consideration cost, ease of implementation, program convenience and other factors.

This report is the first third-party evaluation of a state’s EPR programs in the U.S. Additional evaluations are needed to ensure that EPR laws are as effective as possible. For those governments interested in passing new laws, we recommend that they collect baseline data prior to enactment of a bill, as well as program data throughout implementation. At a minimum, data reported in this study – collection quantities, program costs, job creation, consumer convenience and environmental benefits – will help evaluate program effectiveness. Additional metrics might also include consumer support for the programs, ease of implementation and other criteria.