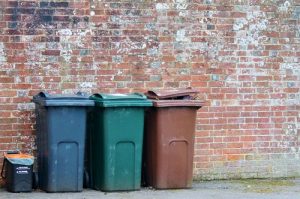 The value of curbside-collected paper and steel is down slightly at the start of April, though some plastics have experienced boosts.

On the upside, plastics reclaimers again pushed the purchase price for HDPE containers higher, with the current level being up nearly 10 cents per pound over the February value. Buyers of PET bales also moved prices higher, to about 14 cents per pound (truckload of bales picked up in the eastern U.S.).

The value of old aluminum cans this month is at about the same level as in March, at 72 to 73 cents per pound.

On the downside, the irrational recovered paper market of the first quarter, when some mills and exporters offered hefty premiums over list prices, is now back to some sense of stability. Bale prices have moved down slightly from their lofty levels, although the current values remain substantially above their historic averages. According to several reports, Chinese recycled paperboard producers now have sufficient bale inventories and thus can offer slightly lower prices to foreign fiber suppliers.

Materials recovery facility managers are also being offered slightly lower prices for steel bales. A shortage of scrap metal in the first quarter pushed prices up dramatically, and this led to increased collection activities by peddlers and other scrap-yard suppliers. As a result, the market is now back in balance, say industry analysts.