What Phoenix hopes to get from $6 million deal with Recyclebank 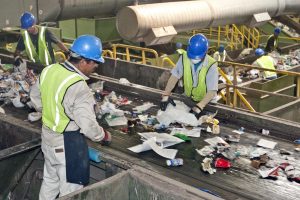 A recycling incentive and outreach program is now available to all Phoenix households, an effort that is aiming to boost participation and lower contamination.

The program, launched this month, is a result of a contract between the city and New York-based Recyclebank. The contract is part of a plan for Arizona’s largest municipality to double its diversion rate to 40 percent by 2020 and to reach zero waste by 2050.

“For us, education and communication is really going to be key to get to that goal,” John Trujillo, the city’s public works director, told Resource Recycling.

Phoenix, a city of about 1.5 million residents, previously worked with Recyclebank in 2009. At that time, the program was offered to a select group of 105,000 households. Now, the Recyclebank program will be offered to all 400,000 single-family households enrolled in its solid waste program. Nearly 360,000 currently participate in the recycling program.

The contract, approved by the City Council in June, has the city paying nearly $6 million for three years, with the possibility for two one-year extensions that would bring total expenditures up to nearly $10 million. That pencils out to about $5 per customer household annually.

Recyclebank’s responsibility is to educate all single-family households on recycling, highlighting both the benefits of materials diversion and how to do it correctly.

Recyclebank’s educational efforts will include setting up a website, going door to door and talking with residents, hosting outreach events, offering a smartphone app and more.

Phoenix joins Philadelphia, which also has about 1.5 million residents, as Recyclebank’s largest programs.

Recyclebank was founded 13 years ago as a for-profit company working to offer incentives that would push households to recycle. Households are given points based on their recycling participation, and those points can then be redeemed for goods and services at businesses. Participation is measured through the use of radio-frequency identification chips on curbside carts.

Recyclebank leaders say their approach has evolved somewhat since then.

“At that point it was all about getting more people to recycle,” said Paul Winn, executive vice president and general manager of the company. “But now it’s also getting people to recycle right, correctly. Education, we think, is a key point to that.”

Phoenix currently has a roughly 20 percent diversion rate, despite having a high percentage of participating households. The material that ends up at the city’s materials recovery facility (MRF) has a 21 percent contamination rate. City government wants to change that, particularly as growth estimates show Phoenix doubling its population by 2050.

“As we started looking down that path, our program that we currently had in place at the time wasn’t sustainable,” Trujillo said. “We’re trying to come up with ways (to) figure out what we can do to minimize that impact.”

Before approving the contract last year, the Phoenix City Council discussed whether there was a strong enough financial return to justify the nearly $10 million the city could pay over five years.

Some council members felt it was too expensive and that the money could be better spent on schools, according to meeting minutes, and that educating the public on recycling provided “minimal return on investment.” The final Council vote was 6-3 in favor.

Winn acknowledged it can be a hard decision for cities to invest in recycling education when they face so many other budgetary constraints. But he and Trujillo pointed to several ways in which increased and improved recycling will offset the cost and prove an overall financial benefit.

The city’s current 21 percent contamination rate pencils out to about $1 million in additional cost to the city each year, Trujillo said. Reducing contamination means spending less in that area.

There’s also revenue potential from increased diversion of saleable recyclable materials. When the city completed a comprehensive waste study a couple years ago, it found that 65 percent of the materials residents dispose of were either recyclable or compostable.

“They’re throwing away 55,000 tons of recyclable material that we could have processed and gained revenue from,” Trujillo said. “That 55,000 tons, based on the recycling program here, equates to an additional $4.5 million that we are losing and we are putting into a landfill.”

Another way to look at the financial benefit is to consider maximizing the potential for expenditures the city has already made. Winn pointed out that the collection trucks are already coming down the street whether residents are using their recycling carts or not. The city owns two MRFs operated by ReCommunity to handle that material.

“So how do you get the best return on that investment? I would argue, getting more people to participate,” Winn said.

Comparing Recyclebank’s results from city to city can be difficult. The company began in 2004, and Winn noted products and consumer behaviors have both changed since then. Each city also has its own unique circumstances, meaning in some communities Recyclebank considers 30 percent participation in its program to be a success, while elsewhere it might be closer to 80 percent.

Philadelphia increased its materials diverted substantially with the assistance of the program, which has been active since 2010. The increase penciled out to about $11 million in avoided disposal fees, Winn said.

While it’s difficult to predict the exact results Recyclebank will see in Phoenix, the city plans to monitor it closely as the program gets underway. The contract is performance-based, with the latter two years of the five-year contract subject to later City approval.

“As part of their first year and every year after, they have certain goals,” Trujillo said. “They have to improve our recycling rates and contamination rates.”