Electronics reuse and recycling in Peru, a photographic journey

This story originally appeared in the December 2016 issue of Resource Recycling.

Just off Lima’s bustling Avenida Abancay lies a pedestrian-only byway called Leticia Street. It’s situated under a canopy of haphazardly strung electrical lines and flanked by once-brightly painted low slung buildings. Keep walking and the street narrows even more until visitors find themselves on a lively block that specializes in repairing and reselling electronics. 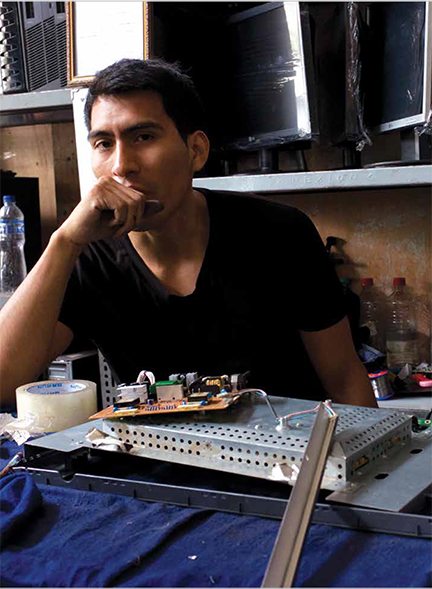 “I got my degree in graphic design but started repairing LCDs about three years ago,” said Richard, who opened his own shop on Leticia Street in Lima a year ago.

A walk down this little street in Peru’s capital provides a glimpse into an understated network that quietly plays a critical role in reducing the environmental impacts of our global production and consumption patterns of electronic devices.

On Leticia Street, small motors harvested from once-functional public telephones, circuit boards plucked from printers, mobile phone chargers, and many other components lie in formation on blankets in the roadway. Stacks of personal computers stand at attention nearby.
Enter the storefronts, and you will see men and women tinkering away at laptops and computers, monitors and televisions – fixing them for their customers.

Policymakers and organizations around the world are working to build capacity in less industrialized countries to repurpose and recycle electronics safely, recognizing that demand for electronic scrap is high in places that often lack advanced solid waste management and recycling infrastructure. Complementary efforts seek to build out a “best of two worlds” approach, where the informal and formal sectors can find ways to work together, thus adapting to the socio-economic realities in many countries that make trading e-scrap attractive to a variety of actors, ranging from individual, undocumented collectors to established recycling companies.

I wanted to see for myself what electronics reuse and recycling looks like on the ground today in a non-U.S. context. I chose to visit Peru as a first stop because much attention on the flow of e-scrap focuses on Africa and Asia, not Latin America. I was also drawn to the fact that in Peru both the informal and formal sectors are involved in collecting and processing e-scrap.

Building on the work of Ramzy Kahhat, an expert at the Pontificia Universidad Católica del Perú, who first examined the flows of e-scrap in Peru several years ago, I aimed to find out if lessons from Lima could inform countries with similar demographics to help them manage their used electronics in an environmentally safe manner.

The images on the following pages reflect different ways that used electronics are managed in Peru and showcase the various actors in the value chain that handle e-scrap.

Can the informal and formal sectors work collaboratively to ensure that certain materials are safely recycled at end-of-life, without cannibalizing the role of the informal sector in driving more refurbishment? That’s a question Peru – and many other countries across the world – are trying to answer.

Verena Radulovic is an independent photographer and also currently leads the development of consumer electronic product specifications within the U.S. Environmental Protection Agency’s ENERGY STAR program. The work showcased here is part of a personal photographic exploration of electronics reuse and recycling in different countries and the views expressed are her own. 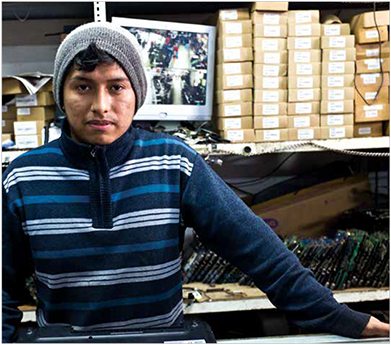 Aldair is a computer repair technician. “I used to work in a wool factory, six days a week,” he recounted. “Sometimes I would work nights only for two week stretches and then have to shift back. It wasn’t great.” His hours are now 9 to 5, five days a week. How did he learn to repair laptops? “I took one course. But after that, YouTube [has been] a great teacher.” 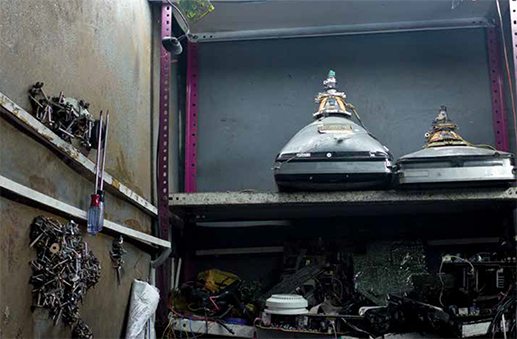 A CRT repair shop in one of the indoor shopping centers off Leticia Street. 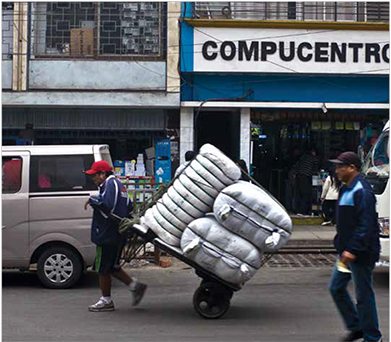 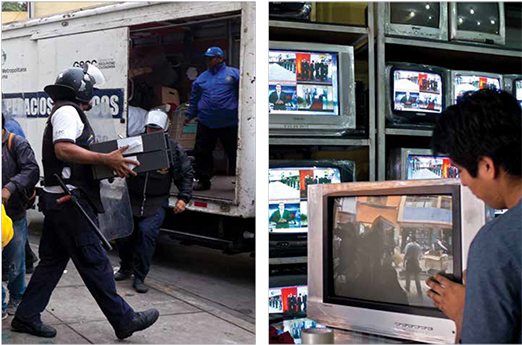 Left: Police conduct a raid on Leticia Street, confiscating used PCs that were displayed on the sidewalk. Police periodically raid the informal sector that operates in the open to discourage this type of resale or to confiscate equipment collections they assume include stolen goods.
Right: CRT televisions being prepared for resale, just off Leticia Street. 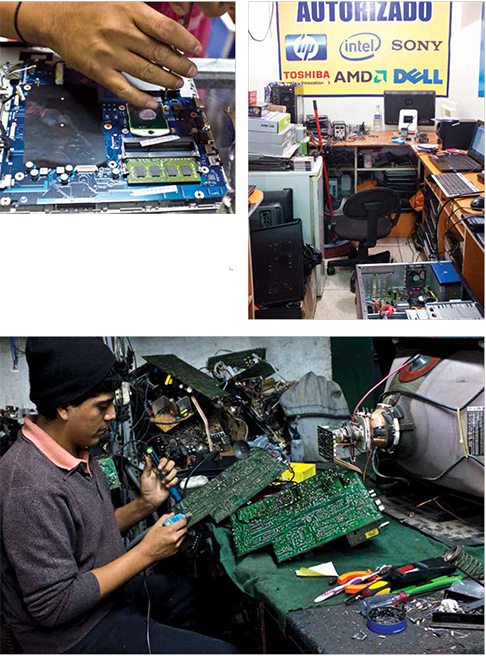 Top: A repairman fixes a circuit board.
Right: An electronics repair shop in Lima, near Avenida Wilson. Some refurbishers claim to be manufacturer-authorized repair shops. Though these claims are often dubious, technicians successfully repair laptops, usually for the equivalent of around $30.
Below: A technician repairs a CRT TV for a customer. In the backstreets of Lima, a market for used CRT TVs thrives. 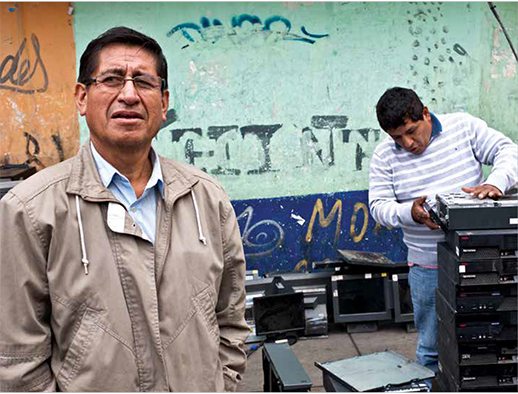 Señor Freddy (left) has been selling used electronics on Leticia Street for nearly a decade. Other collectors and refurbishers noted that formalizing the informal sector would increase their costs, especially for disposing components such as CRTs that no longer have market value but contain hazardous materials. Other countries such as Brazil and India have formalized some informal collectors and waste pickers into unions, thus providing the opportunity to engage more directly with other stakeholders in the formal sector. 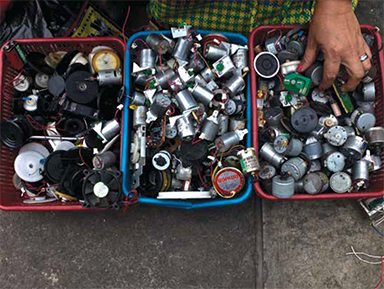 Small motors harvested from once-functional public telephones sell for the equivalent of $1 each. 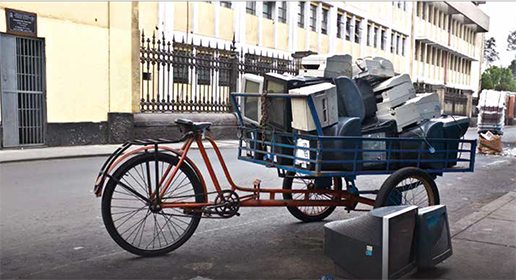 Bicycles such as this one belong to the cachineros, informal waste collectors or scavengers, who collect used inventory, and then sell it to repair shops and resellers. 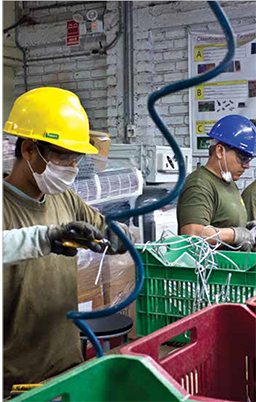 At Peru Green’s recycling facility, worker safety is paramount, and most workers are paid a salary with benefits. A small percentage of components are sold to a local metals processor. The majority of components, such as printed circuit boards and copper cables, are sorted and shipped to either the U.S., Europe or China for further processing as Peru Green does not currently have a mechanism to reduce or shred components down to the commodity, or raw material, level. 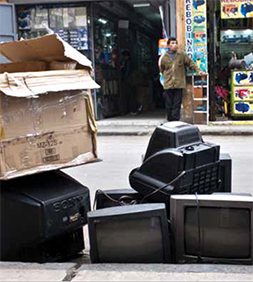 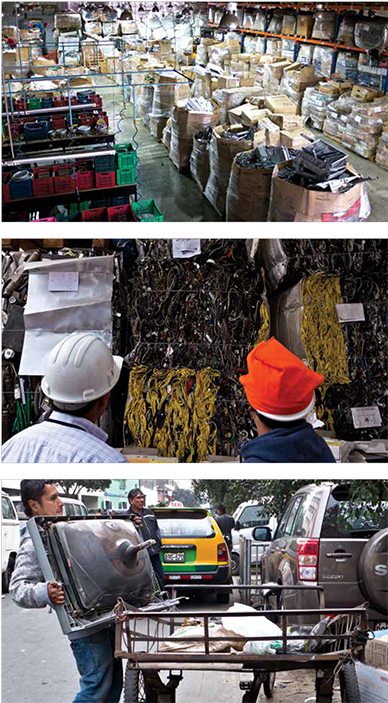 Top: At Peru Green’s facility, products are dismantled at workstations, and materials are sorted into giant bins. A small percentage of Peru Green’s recycling contracts with institutions prohibit reuse, a fact that adds incentive to export components to regions where they have high market value. Peru’s need to export components to other regions points to the need for best recycling practices on a global scale.
Middle: A formal recycling facility in the outskirts of Lima, where electronics are dismantled and sorted under safe conditions. Under its contractual obligations with commercial customers, this facility does not refurbish electronics or salvage parts for reuse. Metals such as steel and aluminum are sold locally and components such as circuit boards, copper cables (shown here) and plastics are baled and prepared for export to China for further processing.
Bottom: Ricardo makes his living collecting electronics from households and shops, and he finds secondary customers for them. On any given day, his bicycle cart can pile up with 20 to 30 CRTs. When a product cannot be repaired, he harvests the valuable parts, such as the copper wiring and circuit boards, for resale. The lack of local markets for CRT glass, however, presents a vulnerability since informal collectors don’t have an incentive to pay for safe disposal. Connecting them to the formal sector to assure safe recycling is an area needing policy attention.