This story originally appeared in the December 2016 issue of Resource Recycling. 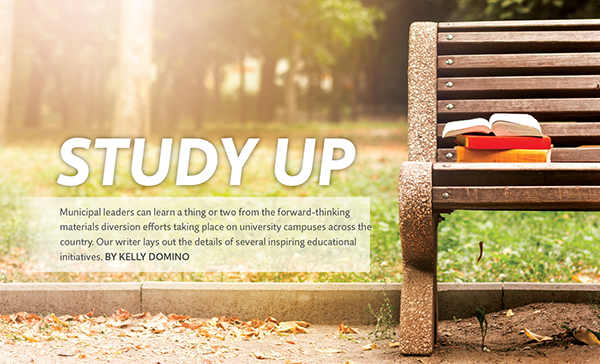 Much like municipalities, universities consist of systems and structures, offering eateries, bookstores, workspaces and housing, not to mention new infrastructure being built every day. Some university centers, in fact, rival small cities in size and complexity.

These mini-cities are driven by the higher education attributes of research, knowledge and leadership, as well as a healthy competition for new enrollments. This combination of infrastructure and ambition makes universities ideal proving grounds for recovery activities.

Several universities have taken on activities to move toward improved diversion goals and can be resources for community recovery ideas. And in some cases, the on-campus action is leading to new expectations and behavior change in the wider community.

From analysis to action

Some schools are leading the way when it comes to understanding their waste streams.

In the materials recovery world, a waste characterization study provides information on the materials being placed in trash, recycling and composting bins. This can provide potential opportunities to improve program communications and activities to move closer to goals tied to specific diversion rates or zero waste.

The University of Michigan, with enrollment approaching 45,000, worked with sustainability consulting firm RRS to conduct three waste sorts at two academic and administration buildings over a three-month period. (Editor’s note: The author of this story is an RRS staffer.)

The waste sorts revealed the following:

The university is utilizing the results of the waste characterization to inform next steps to move it closer to its diversion goals. Several additional activities are being planned at the university to help it minimize waste.

Administrators, for example, are establishing university-wide bin and signage standards while also increasing signage and labeling at all university containers. Other steps include continuing staff and faculty education on source-separated programs for diversion of atypical items, such as e-scrap and polystyrene foam. And plans are in place for a phased implementation of a university-wide organics composting program.

“The data gathered from the two-building waste audit has helped us move forward in waste reduction efforts on campus by supporting the importance of consistent signage and labeling on recycling bins and waste stations,” said Anya B. Dale of the University of Michigan’s Office of Campus Sustainability, “and enumerating the significant contribution food waste makes to landfilled material even in buildings without food service.” 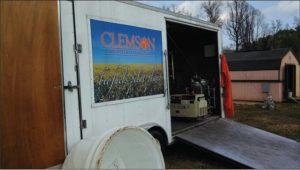 The university’s efforts indicate how a waste characterization analysis is a solid foundation upon which to build or improve a recovery program. Municipalities can utilize these characterization metrics to identify program issues and topics to engage residents via outreach and education efforts.

Diversion in the dining hall

Food waste reduction has been a hot topic in materials recovery. A report this year from the recently created ReFED organization highlighted the U.S. food waste problem – $218 billion per year spent on food that is never eaten and 52 million tons of food sent to the landfill.

This issue is not confined to a single group, but is a worldwide epidemic. We can look to universities that are taking on this problem for ideas and partnerships.

South Carolina’s Clemson University has over 20,000 students and first began composting wood and grass nearly a decade ago. Tom Jones, director of custodial and recycling services, helped start the initiative in 2009. “I felt a university with such a large history of agriculture should begin taking advantage of the untapped resources on campus,” he said recently.

Composting at Clemson starts with the pre- and post-consumer food scraps generated every day in the on-campus dining halls and select on-campus apartments. Food prep stations are equipped with food collection carts, which are rolled out to the loading dock. A university truck collects from those points as well as from a few other public compost bins at campus apartments.

Materials are then transported to Clemson’s compost site, which features multiple options for processing. The university uses an in-vessel composter as well as an innovative composting system that relies on black solider fly larvae to break down organics and create materials useful to agriculture. However, with increased volumes of food scraps being collected, the university mainly uses the technique of forced aeration piles to process the compost. The resulting soil amendment is later utilized on campus or sold to the public.

In addition to compost collection, Clemson continues to expand its recovery efforts across campus. These steps include: 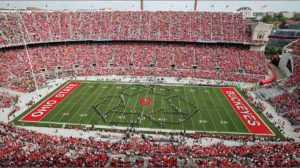 “By next year we are hoping to expand food waste collection to an additional section of our residential buildings, continuing the process to eventually collect food waste campus-wide,” said Dave VanDeventer, Clemson’s recycling manager.

New program initiatives, such as educating tailgaters at Clemson sporting events, have also helped increase the awareness of recovery efforts on campus. “Currently, we are piloting … a Zero Waste Tailgate program in which our department provides a recycling and compost bag as well as educational materials to tailgaters,” stated VanDeventer. This pilot effort educates the community about Clemson’s recovery efforts and also diverts food scraps to Clemson’s very own nearby compost site.

Moving the chains on zero waste

Efforts to center materials diversion around sporting events can extend far beyond tailgaters in the parking lot, however.

Ohio Stadium, home of the Ohio State University (OSU) Buckeyes in Columbus, Ohio, has a capacity of nearly 105,000. According to a case study from the National Resources Defense Council (NRDC), the stadium initiated recycling efforts in 2007. Most of the process was conducted behind the scenes – trash was taken to a materials recovery facility where recyclables were sorted out – and they resulted in recovery rates around 50 percent.

In 2011, the stadium set forth on a journey toward zero waste, aiming to divert 90 percent of trash from the landfill by recycling, composting and repurposing.
The stadium made the bold move of having all trash cans removed from the stadium and replaced them with 75 “zero waste stations” that contained bins for recycling and composting. To help with the transition and encourage participation, high school students were employed to educate stadium visitors.

Partnerships with several groups have contributed to the success of the program. The Mid Ohio Foodbank accepts donatable food, OSU’s National Reserve Officer’s Training Corps (NROTC) is utilized to sort materials left in the stadium seats, OSU students remove contamination from the local composting site, and both recyclable materials and post-consumer compost are sorted by inmates at the Southeastern Correctional Institution.

“Ohio Stadium [acts as] a unique system to engage the community,” stated Tony Gillund, sustainability manager at OSU. “The stadium is its own gateway for the community to the university and allows us to educate and involve community members on the zero waste recovery process.”

The NRDC case study states that within one year of launching, OSU achieved a single game diversion rate of 98.2 percent and a season average of 87.2 percent. Diversion rates at the stadium have met the university’s 90 percent goal each year since 2013, with the most recent year of available statistics, 2015, reporting an average rate of 96.4 percent.

Look to the proving grounds

These universities are only a sampling of the many schools that have embarked on paths toward sustainability in waste management. For example, Recyclemania, an eight-week college competition focused on promoting waste reduction activities, has grown from two participating schools in 2001 to approximately 400 colleges and universities in 2015.

Communities can look to these proactive student bodies to understand why certain recovery efforts worked and others failed – in this way, best practices are emerging that can be applied to a municipal recovery program.

In addition, ample opportunity exists for campuses and municipalities to form partnerships to create economies of scale and craft more economical contracts.

Universities educate the students enrolled as well as the communities and industries around them. It is that leading, learning and competitive edge that make them an invaluable resource.