Numbers for the first nine months of the year show volume drops in all materials but paper.

In September, the most recent month for which figures are available, scrap plastics exports totaled 354.25 million pounds, a drop of 5.8 percent from August 2016 export levels.

However, when matched against September 2015 levels, the volume of plastic scrap exports in the month was up by 8.5 percent, marking the second straight month of year-over-year gains.

The weighted price of recovered plastic exports was down. At 16.43 cents per pound, the price declined 4.9 percent from its August 2016 standing. Compared with the price level from September 2015, the number was down even further, by 9.6 percent. 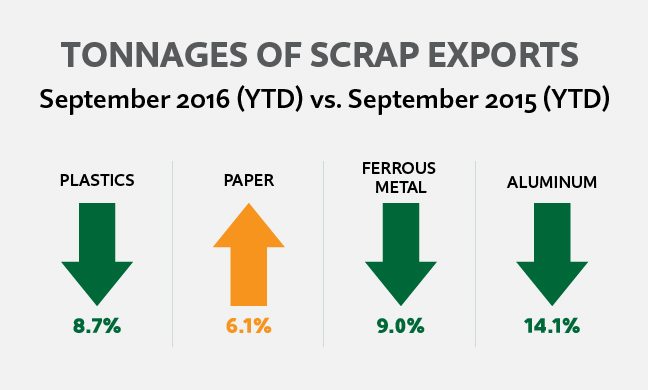 With 3.18 billion pounds of scrap plastics exported through the first nine months of 2016, the year-to-date (YTD) volume was down 8.7 percent from the YTD figure this time last year. At 17.22 cents per pound, the average price through September 2016 was down by 5.4 percent from its 2015 YTD standing.

As for other exported materials, recovered paper exports were up through the first nine months of 2016. Through September, 14.72 million metric tons of paper were exported, a 6.1 percent increase from September 2015 YTD levels. At $156 per metric ton, the weighted average price of exported recovered paper through August was down YTD by 7.4 percent.