Push and pull in paper

This story originally appeared in the October 2016 issue of Resource Recycling.

In many ways, 2016 has been a strong year for companies in the U.S. paper recycling chain.

During the middle of September, average U.S. mill prices for recovered paper hovered around 18 percent better than at the same time a year earlier. Meanwhile, prices for old corrugated containers (OCC) bested year-ago numbers by 23 percent, according to The Paper Stock Report.

“It has been a decent year,” summarized a broker in Chicago.

“Corrugated prices have been on the rise ever since the Chinese New Year (in February),” added an exporter in Southern California. “Export prices stabilized, and I think we’re getting on a stronger path. Packaging companies are going strong and making money, so packaging grades are doing very well.”

That optimism was expressed even as most traders anticipated a seasonal fourth quarter decline in demand for fiber, coupled with increased generation, which most likely will bring prices down somewhat.

At the same time, exporters are saying they anticipate a modest increase in the near-term cost of moving recovered paper to China and other overseas markets. Extremely low rates, they noted, brought on the bankruptcy of South Korea’s Hanjin Shipping Co., and at least a portion of a proposed October rate increase announced by steamship lines is expected to take hold – a rare occurrence in the last several years.

“I can send a container full of paper across the Pacific Ocean to China for less than it costs me to Uber across town from my house to the airport,” said the Southern California exporter. “I am shipping containers from Long Beach to China for $125. It’s unheard of.” 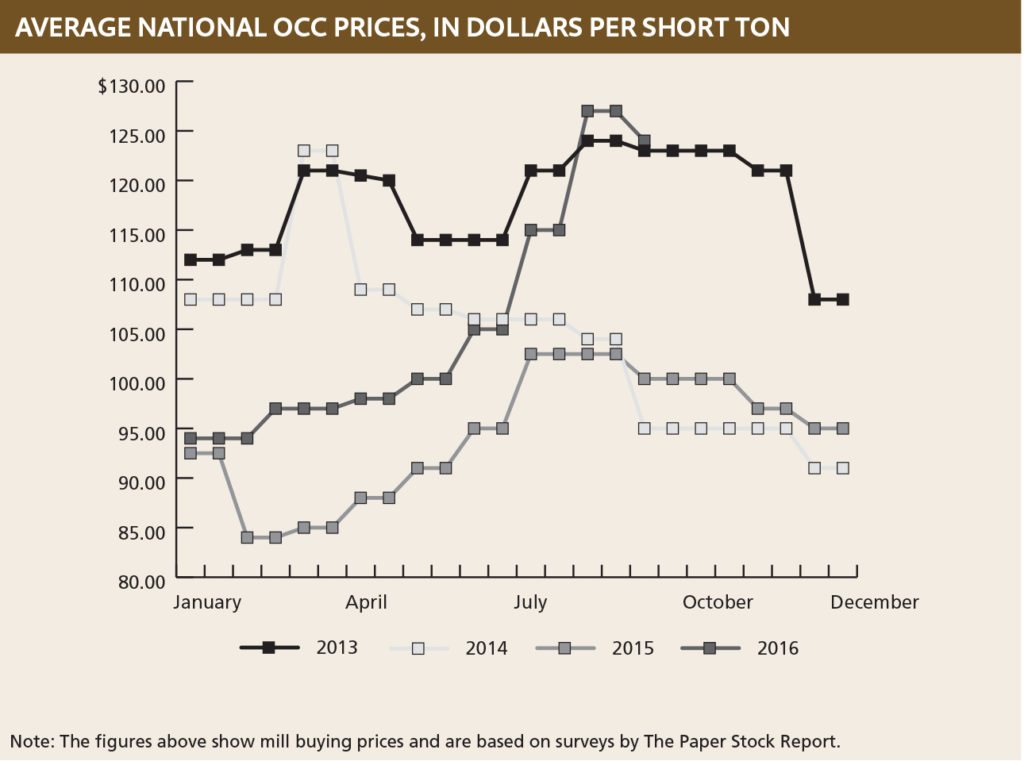 No major fallout from Hanjin so far

Early in September, the bankruptcy of Hanjin, the world’s seventh-largest container line, caused havoc in many ports around the world as ships reportedly holding $14 billion worth of cargo were denied entry. In addition, outbound vessels were not being loaded and several ships were seized at ports around the world.

An exporter in the southeastern U.S. said he had some outbound containers backed up at the port of Wilmington, N.C. when a Hanjin vessel was shut out of the port.

“We had to reroute them and most of the material was shipped off to domestic mills,” he said. “Most of the mills in the southeast were already in very good shape for inventory, but there is always a nice appetite for OCC.”

According to an exporter in Florida, the Wilmington port problem was a unique situation.

“At a port like Savannah, where Wal-Mart and Kmart have big warehouses, all the ship lines are going in, so it isn’t a major disruption when Hanjin isn’t there,” he said. “At Wilmington, Hanjin was the only line going through there, so it was a problem.”

On the West Coast, an exporter who ships out of Long Beach said he had some Cosco containers on Hanjin vessels that were anchored outside the port.

“We haven’t been using Hanjin lately, but all of the lines are sharing vessels now, so all of the major carriers are affiliated with Hanjin in one way or another,” he said. “I had a lot of Cosco containers on the Hanjin ships, but I wasn’t very worried about it. We had to pay to get our empties off and for the transportation in and out of the port, but we didn’t have any demurrage charges.”

Another Southern California exporter added, “We haven’t had any Hanjin-related shipping problems yet, but it’s too early to tell if their might be later on. Secondary affects are hard to predict with any accuracy.”

Generally, though, the people who were doing the worrying about Hanjin repercussions were retailers who were concerned about getting merchandise to their shelves in time for early holiday shopping.

Overall, said Niels Erich, spokesman for the westbound segment of the Transpacific Stabilization Agreement (TSA), the impact of the Hanjin bankruptcy on recovered paper exporters “should be minor.”

“Hanjin has not been a major player in the wastepaper market, fluctuating within a 3 to 5 percent market share for the commodity,” Erich said. “We’ve heard relatively little discussion about stranded westbound cargo, and nothing specific about wastepaper. Given the overall slowing factory demand for wastepaper used in export packaging, I doubt the volumes stuck in transit are very significant.”

“For Oct. 1, most lines are looking at around $300 per FEU (forty-foot equivalent unit) across the board, with some fine-tuning by commodity,” Erich said. “In the case of wastepaper, however, I’d imagine lines will be looking for the full GRI or close to it, as rates have been so low recently that some lines have considered exiting the segment to focus on repositioning empty equipment.”

“It should be noted, by the way, that lines first notified the trade of these scheduled increases in early August, pre-dating any of the Hanjin news,” Erich said.

“They are bleeding,” said an exporter in the northwest U.S. “If they can’t get reasonable rates there are going to be more bankruptcies.”

However, few, if any, exporters expect the full rate increases to stick.

“They never do,” said the Southern California exporter. “They sit down at a table and everybody agrees, and before they even reach the elevator they are undercutting each other. This time around I think rates will go up, but not as much as they want.”

Market seems to have reached a peak

Recovered paper prices have strengthened as the year moved along, but traders in September said they anticipated markets to relax during the fourth quarter.

“If you look at the OCC trend so far this year, it has followed the same pattern as last year, and I expect to see prices tail off like they did a year ago,” said a manager for a southeastern U.S. mill group. “Export always softens a bit in the fourth quarter, generation is picking up, especially at department stores and discount stores, so domestic prices will soften up.”

A procurement agent for another mill group said the Hanjin situation has helped to push mixed paper prices down.

“There was a lot of mixed paper in those containers that ended up being stuck domestically,” he said. “Pratt (Industries) was able to take advantage of that and push their price down $10.”

A broker in the southwest U.S. speculated that exports could see an October bump upward before settling down for the year.

“Chinese mills have to renew their import licenses at the end of every year,” he said. “If Dec. 31 comes and they have only brought in 80 percent of their quota, they could get a lower quota from the government next year. If their buying is down at the beginning of October, they may want to ramp it up. If enough mills are in that scenario, it could cause a temporary surge in demand for a couple weeks. That’s the only thing I can see keeping prices up.”

On average, domestic mill prices for OCC in September were around $30 per ton higher than at the beginning of the year, even after a minor August-to-September reduction, according to The Paper Stock Report.

The improved prices helped the country’s largest MRF operators, which had seen their recycling operations dragging down overall bottom lines.

For example, in announcing his company’s 2016 second-quarter financial results, Waste Management CEO David Steiner said a 2.3 percent increase in average commodity prices for the quarter, and a 2.9 percent decrease in volume, drove the company’s recycling line of business to its highest income from operations since 2012.

In some cases, Waste Management rebid bad contracts and somebody else took them, he said.

“Losing those volumes is the best thing we can do for recycling because they were literally negative margin volumes,” Steiner said.

Meanwhile, Don Slager, CEO of Republic Services, said in his second-quarter announcement that recent recycled commodity prices have trended above the prior year by about $5 to $10 per ton.

Ken McEntee is the president and owner of McEntee Media, which is the publisher of a number of business periodicals including The Paper Stock Report and Composting News.