In My Opinion: Time to double down 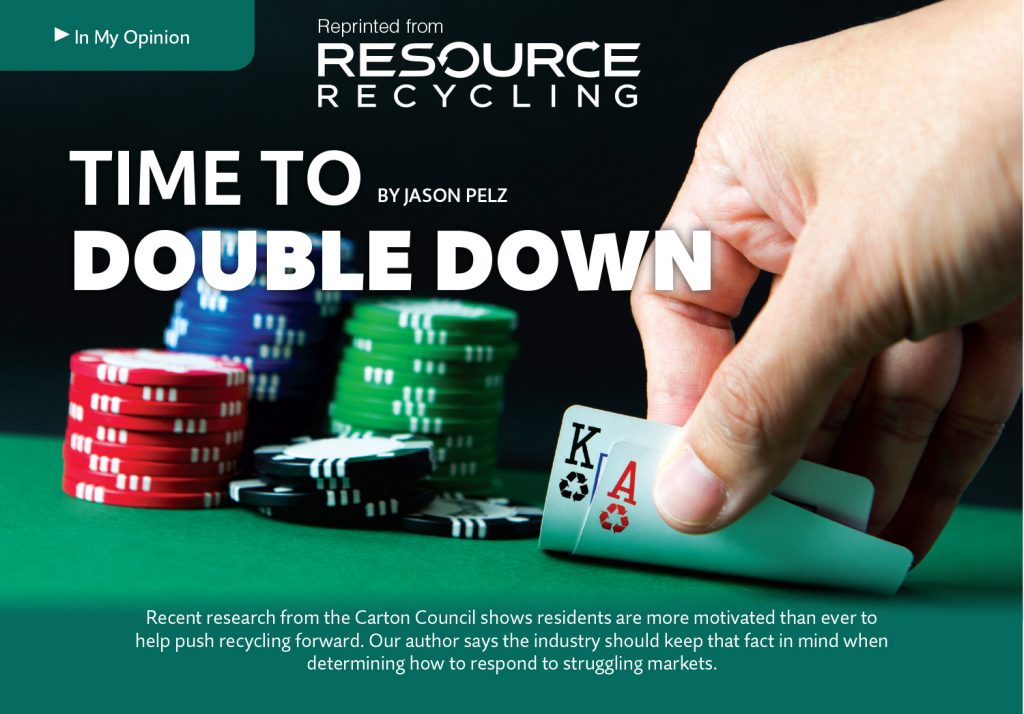 Do consumers still care about recycling? Some new research indicates they absolutely do.

Despite negative media coverage last year questioning the impact and financial viability of recycling, an overwhelming number of consumers believe diverting materials from the waste stream is an important environmental action. That consumer sentiment was demonstrated loud and clear in the results from national research conducted by the Carton Council. (Editor’s note: The author’s company, Tetra Pak, is a founding member of the group.)

According to the research, consumers don’t just care about recycling – they are recycling and show no signs of reversing that action. As recycling stakeholders, we should be heartened by this reality, and in fact it makes sense to now bolster our commitments. With apologies to Kenny Rogers, now is not the time to fold ’em or walk away. Rather, we should hold tight and maybe even double down.

Yes, the recycling marketplace is encountering challenges right now. But the answer should be to reinvest in education and push forward programs and technology. That’s the hand residents in our communities expect us to play. 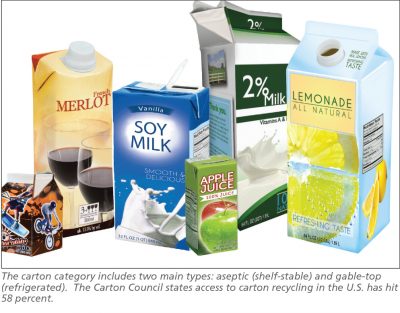 Let’s look at the numbers from the Carton Council study on the feelings Americans hold toward recycling. Findings from the research are based on a survey of 2,495 adults conducted by Research+Data Insights. The survey included a nationally representative sample of Americans who reported having access to curbside recycling programs in their communities, and the results were weighted to correct known demographic discrepancies. Responses were collected online between Dec. 2 and Dec. 13, 2015.

The results also pointed to the fact that Americans are acting on those beliefs. Eighty-one percent said all or some of the houses in their neighborhood set out recycling on collection day. Also, 95 percent said environmental benefits would be realized if more people took part in materials recovery programs.

With the price of oil so low, there has been a lot of discussion about the short-term economic feasibility of recycling. However, recycling is important not just for the economic benefits but also because it tackles the issue of resource scarcity that will eventually impact us all. Additionally, in some communities, recycling addresses concerns over the lack of landfill space.

Progress can still be made. In fact, look at what we have been able to do in just seven years with carton recycling access. In 2009, the Carton Council formed when four carton manufacturers – Elopak, Evergreen Packaging, SIG Combibloc and Tetra Pak – as well as associate member Weyerhaeuser came together to help build an infrastructure in the U.S. for carton recycling. At the time, only 18 percent of U.S. households could recycle cartons in their local programs.
Today that access number is at 58 percent and growing.

How did we get here? First, we knew we needed to join forces. An industry united around a common goal is far more powerful than one organization going it alone. Once the partners were on board, the group focused on building an infrastructure that would be economically and environmentally beneficial to all stakeholders. 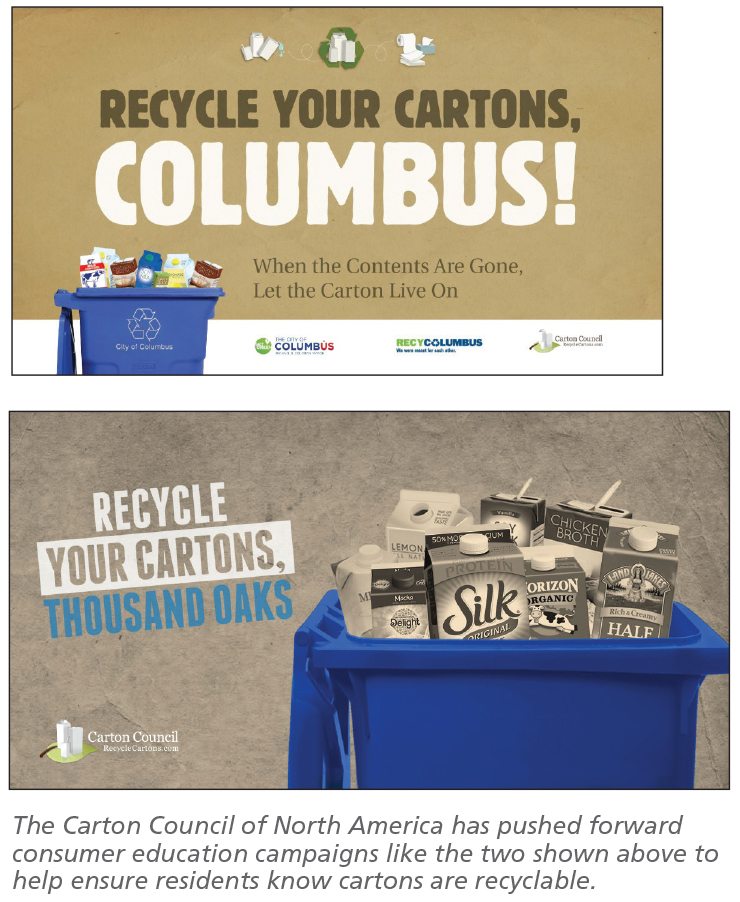 To create such a system, we work with paper mills, materials recovery facilities (MRFs) and local and state governments, as well as other recycling stakeholders. To date, we’ve seen a 222 percent increase in access to carton recycling nationwide. We also know such access is vital: The survey referenced earlier found 89 percent of consumers have food and beverage cartons in their home.

We envision a time when no cartons end up in landfills. And there still appears to be some confusion over whether cartons are recyclable, which reinforces the importance of education, another focus area for our group.

Recycling is here to stay

We know we are not alone in our conviction that recycling is more important than ever. Along with other mainstream commodity organizations, the Carton Council is a funder and board member of The Recycling Partnership and is also involved in AMERIPEN. We recognize there are many aspects of our collective recycling system that may need to evolve or improve. What industry that has survived the test of time has not gone through change or transformation?

The people we serve – American consumers – have told us they want to recycle and that they believe it matters. The study findings reaffirm they are not yet recycling all they can. This does not mean we give up. It means we need to continue to invest: in technology, in infrastructure, in partnership and, of course, in education.

We feel we have a responsibility to help make recycling viable for all while also helping to make recycling more economical and feasible for the industry and governments. In the case of our group, cartons are the focus, and we look forward to more milestones in the future.

If consumer opinion is any indication, we should expect milestones ahead for the greater recycling arena as well.

Jason Pelz is vice president of recycling projects for the Carton Council of North America and vice president, environment, for Tetra Pak Cluster Americas. He can be reached at [email protected] For more information about the Carton Council, visit cartonopportunities.org. For more information on the research findings referenced in this article, visit cartonopportunities.org/survey.