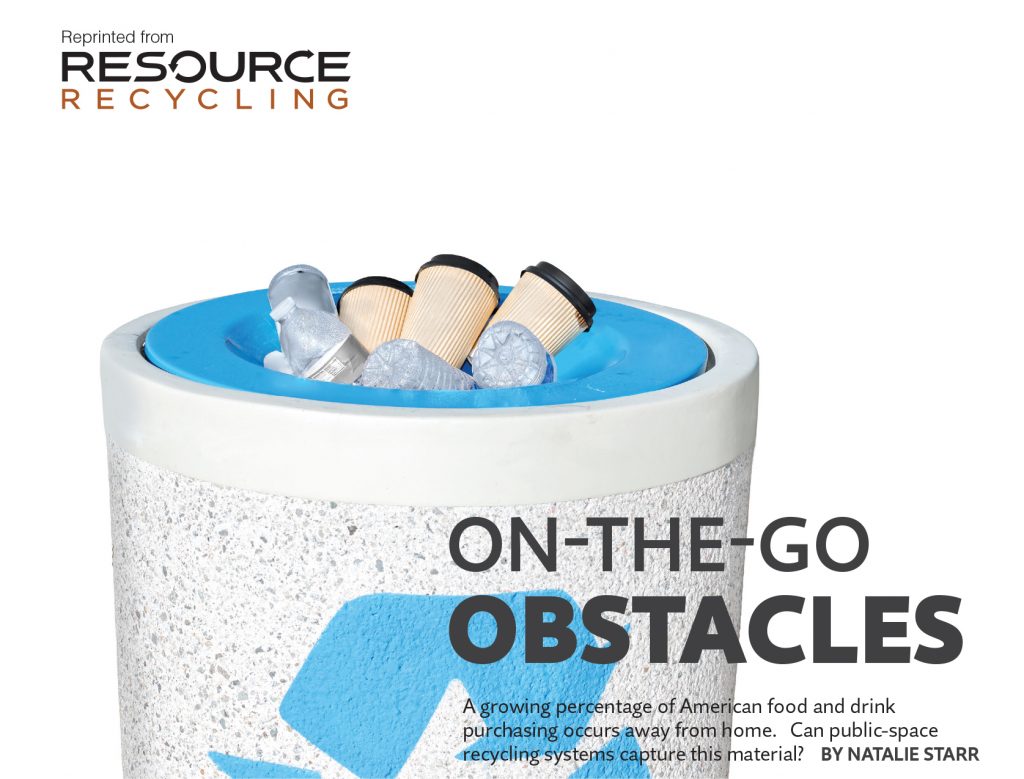 Recycling at home is finally widely available across America, with access exceeding 90 percent for most common recyclable materials. A survey from the American Forest & Paper Association, for instance, found 96 percent access to paper and paperboard recycling in 2014, up from 87 percent in 2010, and Moore Recycling Associates has reported at least 94 percent of the U.S. population has access to PET and HDPE bottle-and-cap recycling.

In addition, some communities are seeing recovery rates of 80 percent or higher in their curbside or drop-off programs. A recovery rate is defined as the percentage of recyclable material that successfully makes it into the diversion stream – for more details, see the article “A case for recovery rates” in the January 2015 issue of this publication, available at tinyurl.com/DSM-Rates.
While analysts may argue about some of the specifics of those statistics, it’s clear the industry and communities nationwide have made great progress.

In addition to the “evolving ton,” which describes the phenomenon of reduced weights and shifting composition of recyclable material, another explanation is the increasing consumption of food away from home. According to the U.S. Department of Agriculture Economic Research Service, 43.1 percent of food spending in 2012 was directed at food to be eaten away from home, up from 25.9 percent in 1970. While there is little tracking on the composition and fate of the associated packaging, the National Association of Convenience Stores (NACS) reports 84 percent of items purchased at convenience stores are consumed within the hour of purchase. And according to the research firm IRI, 27 percent of the best-selling foods and drinks introduced in 2013 were bite-sized or handheld – and 21 percent were classified as on-the-go or ready-to-use. These statistics indicate much food and beverage packaging may not make its way to a household recycling cart or bin.

As America consumes more food and beverages away from home, recycling on-the-go is likely to be a key to increasing material recovery rates. But access to recycling on-the-go has a lot of catching up to do to match the infrastructure we’ve created for recycling at home.

There is some evidence of governmental action aimed at addressing this issue.

In Vermont, for example, recycling containers are now required to be located in publicly owned spaces wherever trash cans are provided (except bathrooms) under the state’s 2012 universal recycling and composting law.

At the same time, a pending bill in Massachusetts reaches even further, requiring recycling in public buildings and open spaces as well as in privately owned “high-traffic areas,” defined as facilities visited by at least 5,000 individuals annually. This classification includes but is not limited to stadiums, arenas, marinas, airports, museums and theatres.

As these East Coast examples illustrate, public-space recycling is growing, but there remains a high number of trash bins not paired with recycling containers.

There have been a number of grant programs and research aimed at enhancing public-space recycling and the receptacles used to capture material in that arena. Such work has been spearheaded by Keep America Beautiful (KAB), North Carolina’s Division of Pollution Prevention and Environmental Assistance and the Downtown DC Business Improvement District in Washington. 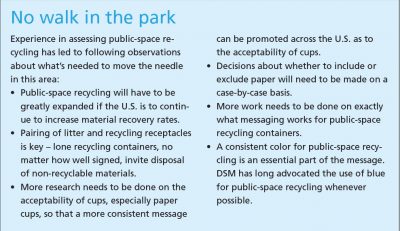 In some cases, collection efficiency has been enhanced by the use of compactors on receptacles, as well as sensors that can report on receptacle fullness and allow for more efficient daily truck routing. But even if collection efficiency is handled, questions remain: Is it is really worth it to collect recyclables separate from other street litter, and can we keep contamination within acceptable limits for the processing facilities that will receive the material?

The issue of contamination is central to expanding public-space recycling at a time when many MRFs are struggling with increased contamination from their residential programs while material revenues are the lowest they have been since 2008.

With such issues in front of us, it’s good to have some insight into what works best to get quality material out of public-space systems. Recently, KAB partnered with George Washington University to conduct an online survey to determine which features make a recycling bin recognizable to the public (see “Bin the Know” in the December 2015 issue of Resource Recycling – tinyurl.com/KAB-Bins) and found recycling bins are most recognizable when they include the following characteristics:

But when it came to specific signage to inform behavior, findings were less conclusive. While the study found containers with words but no images produced the best results, it was unable to identify the specific words or phrases that will consistently elicit the desired action from passersby. Clearly, this “call to action” area is a place where more knowledge-sharing can help the industry as a whole.

It has been the experience of DSM Environmental Services, Inc. [editor’s note: the author of this story is a principal of that firm] that contamination is typically the key factor preventing government officials and private facility managers from adding recycling to trash container locations. Overcoming contamination has typically been addressed by limiting recycling to one or two materials commonly recycled, such as beverage containers and newspapers. While this approach makes messaging simpler and often yields cleaner material, attempts at zero waste and sustainable materials management can’t be met without aiming to recover the diverse mix of packaging that consumers use today, particularly away from home.

Communicating what could and could not be recycled to the people who can be found near the Mall proved complicated, however. The people who frequent this area of the city speak many different languages and come from across the globe. Ultimately, it was decided to only collect containers for recycling.

In addition, paper and containers were recycled in the surrounding DC Business Improvement District, until a recent audit revealed contamination levels of 28 percent – with the majority of paper products contaminated by foods or liquids. A recent decision to remove paper from the stream will lead to updating signage on all recycling receptacles and replacing lids to make it more difficult to recycle items other than bottles and cans.

A frequent public-space question posed when designing recycling programs is whether cups should be accepted or specifically prohibited. At the National Mall, coffee cups made up 6.2 percent by volume of all the material in trash receptacles, and soda cups represented 8.5 percent by volume. Together those cups made up roughly 15 percent of the trash volume.

Most of the MRFs that DSM works with treat expanded polystyrene as a contaminant, and many do not accept cups because of the double coating on some of the products that hold cold drinks. While this is certainly not a universal prohibition across the U.S., it is an important consideration in designing a public-space recycling program. Program designers need to have conversations with the potential MRF operators who will inevitably have to process the collected material. It is especially an issue if paper is to be included because of the potential for liquid contamination of the paper from open, half-empty cups.

However, contamination in public-space recycling extends far beyond the cup realm. During waste audits conducted by DSM, sorters often encounter large quantities of dog waste commonly disposed of in public-space containers. Any comprehensive recycling effort in parks or other public spaces will have to clearly indicate the seemingly obvious fact that dog waste does not belong in the recycling container. This effort can be helped by following the important rule of thumb of always pairing recycling receptacles with trash receptacles.

In the end, pairing public-space recycling containers with litter containers is a critical component in achieving waste reduction goals. And even if the public doesn’t get it right at first, making people think before they toss is critical to long-term sustainability of waste diversion programs.

Natalie Starr is a principal at Vermont-based DSM Environmental Services, Inc. She can be contacted at [email protected]