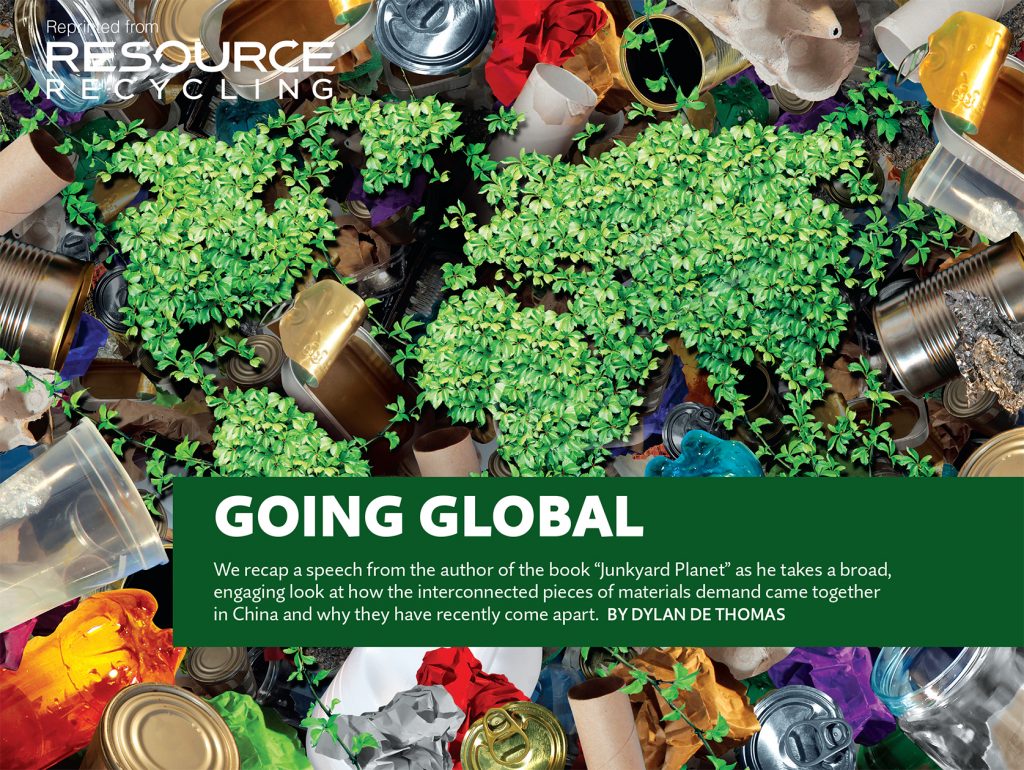 As our readers know, the recycling industry has long been a global concern – markets for collected recyclable materials are shaped not just by the reclaimer or mill down the highway but, rather, by forces across the Pacific Ocean.

International markets for recyclables grew rapidly beginning in the 1990s and the largest consumer of these materials, by far, was China. This market was largely driven by the transformation of China into the world’s manufacturer – not of a particular item or sector, but of everything.

In his keynote talk at last fall’s Resource Recycling Conference in Indianapolis, Bloomberg journalist and author Adam Minter pointed out the specific factors that caused the rise of China to a manufacturing powerhouse – and consumer of recyclable commodities. He also explained reasons behind the recent decline in the Chinese market for the bales of recyclables coming out of MRFs around the country.

His talk was titled “Junkyard Planet: The Past Has Passed, and the Future is Actually More or Less Present.” Some of the following has been edited for readability:

The boom experienced by recycling programs all over the U.S. and around the world was largely driven by what is seen in Figure 1 (below) – the value of Chinese scrap imports from all origins over the last 14 years. 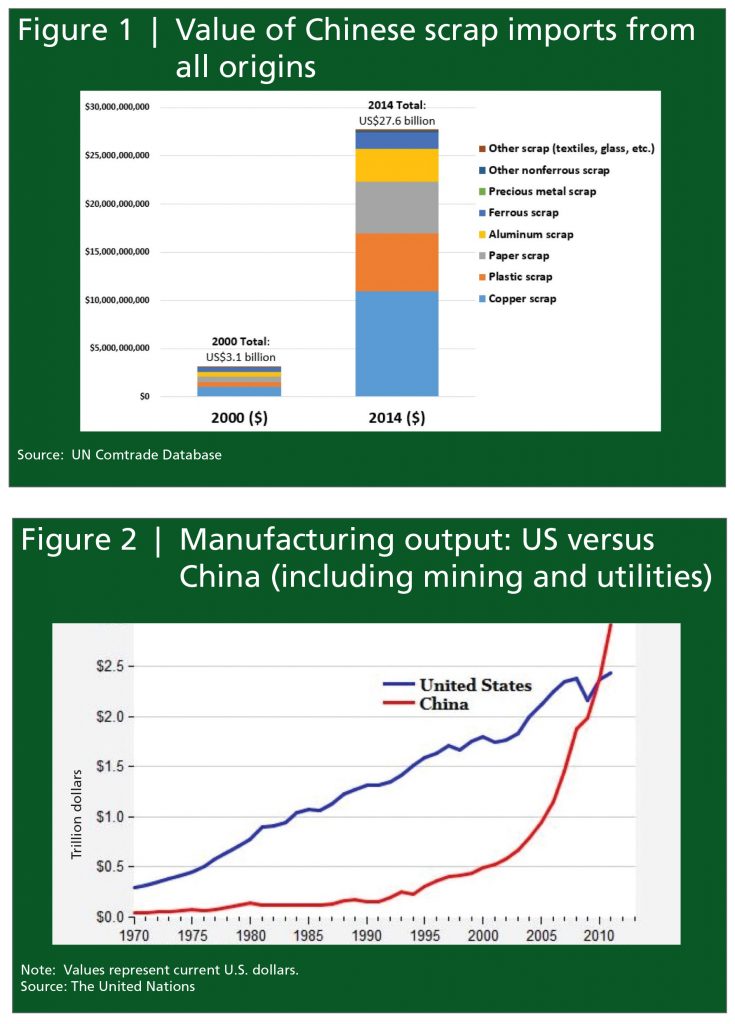 It’s extraordinary. While copper is actually, in terms of value, the biggest part, paper and plastic and other materials are incredibly important as well. And paper in particular may not be the highest in value, but it had the volume. At any given time, most years, paper scrap fiber, including cardboard, was the number-one export by volume from the U.S.

The reason this demand exploded is simple – the growth of Chinese manufacturing. Figure 2 illustrates the explosion of the manufacturing output for China over the course of four decades, starting in 1970.

This growth meant ultimately that China needed raw materials – all that stuff to make more stuff, everything from high-speed rail lines to iPods. That’s what made the recycling industry in the U.S. really boom, helping so many recycling collection programs work so well.

By 2013, China was at the top of everything – the top builder of roads, railways and housing, the largest consumer of copper, aluminum, steel, paper and plastic. And China was the biggest buyer of automobiles, PCs and laptops, smartphones and flat screens, housing, home furnishing and sandals. Everything.

How important was your recycling to China over the boom? Let’s look at copper as one example. It’s a key metal for everything we do and use. It transmits power and information – and China is the world’s number-one consumer of the material. Roughly half of Chinese copper as of 2011, before things started slipping, was coming from recycled resources. Even more impressive is that roughly 80 percent was imported.

This worked out great for everybody. China produced materials, like Christmas lights, and the U.S. used it and sent the stuff back and that was the circular economy. Everybody talked about building the circular economy, and I watched one for a decade in China.

This all worked really well until early 2015, when the price of everything dropped.

The factors behind China’s slowdown

So, what’s going on in the Chinese economy, specifically as related to the scrap industry and the recycling industry?

The first thing that’s gone wrong is China has stopped investing. Figure 4 (below) is a subway map representation of China’s high-speed rail network. Only this subway system covers about 5 thousand miles.

Over the last 10 years, they built this thing and now they’re mostly done. That means a huge drop in demand for metals, aluminum included. But also it means a drop in the people and all the factories that are using plastics and all the employees using paper and everything else. It’s just a big drop for everything. 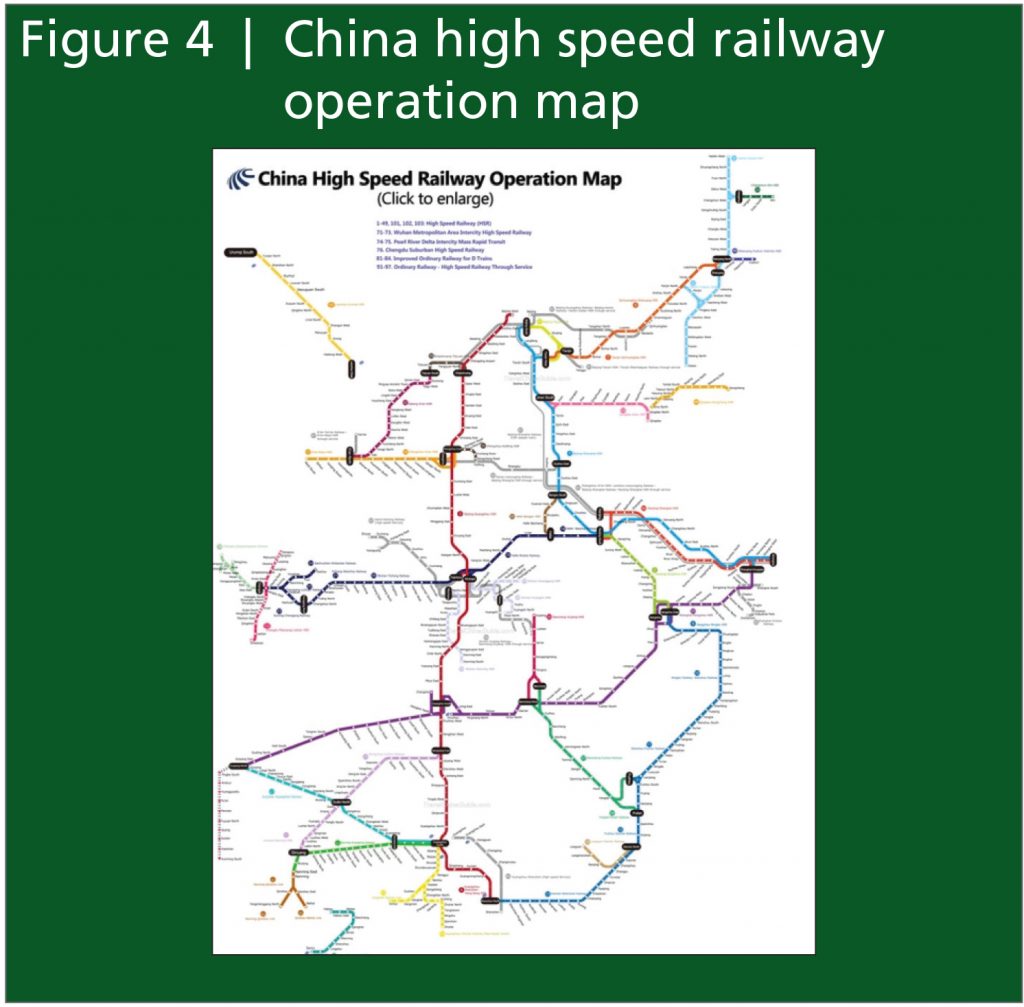 If half of your economy is investment represented by things like roads, airports and rail networks, and that investment suddenly stops, it’s a big problem for everybody who’s supplying raw materials. This includes the recycling industry.

But there are other factors behind slowed Chinese demand for recycled materials. One is demographics. In part because of the one-child policy, the demographics of China shifted. The working-age population – the percent of the country’s population aged 15-64 – peaked during those boom years, hitting almost 72 percent in 2010. This meant more people entering the workforce and meant the wage rate could stay relatively steady – which it did.

But then that percentage started to drop, which caused what I call the elephant in the Chinese scrap heap. Figure 5 (page 34) shows China’s average yearly wages in manufacturing.

If I sound like I’m negative about wages in China going up, I’m not. I lived there for 12 years and I’m thrilled to see the wages going up. China is developing, people are living better. But it is a factor in your programs because the cost of the labor for the businesses you’re selling to is going up. It means that they are less able to pay for your scrap, theoretically.

How much have the wages gone up? The Chinese wage rate in 2002 was about $95. I toured a plant at that time in Shanghai where workers – mostly women – hand-sorted auto shred “fluff,” the stuff that is left over after all the ferrous material is pulled out of shredded automobiles. This is very skilled work. These workers are now paid as much as $628 a month. That’s a huge increase. Where can you go from $95 to $628 a month in a period of about a decade? That’s not the wage growth rate in the U.S.

Wage rates are going up and for the kind of skilled labor that takes place inside a plastics or a paper plant, a worker is going to make 4,500 RMB a month. That’s $706. This is big money in China. For comparison, the wage for the average college grad in China last year was $546.25.

And wages aren’t the only thing improving – the facilities are going from fairly simple to state-of-the-art. If you’re going to run stuff through an automated sorter, it isn’t going to be as good as human hands, but it’s cheaper over the long term. But this means you need better-quality bales.

So that all means Chinese buyers want to start buying better-quality stuff. They’re just not interested, even as their economy shrinks, in getting the low-quality stuff. Ugly bales of paper, like one with a cinder block in the middle, just aren’t going to be accepted in China anymore.

Contamination is an issue in the U.S., but it’s also something we talk about in China a lot. Contamination for the Chinese is: “We don’t want to buy your crap, we want quality.” Chinese companies are upgrading systems because they don’t want to be the low-cost manufacturer of choice anymore.

This is happening in paper, metal and plastics too. It’s really expensive to process this stuff, your recycling, and make it into good stuff. It’s much easier to buy your best stuff.

Growth in other Asian nations?

So what do you do if you have overcapacity in manufacturing? You start exporting it, some might call it dumping, especially if you’re in PET, because they don’t have the markets for it anymore. And until they figure out this overcapacity issue, prices are going to be down. All of this means that they don’t need your municipal recyclables as badly. This is going to be a long-term problem for the recycling industry. 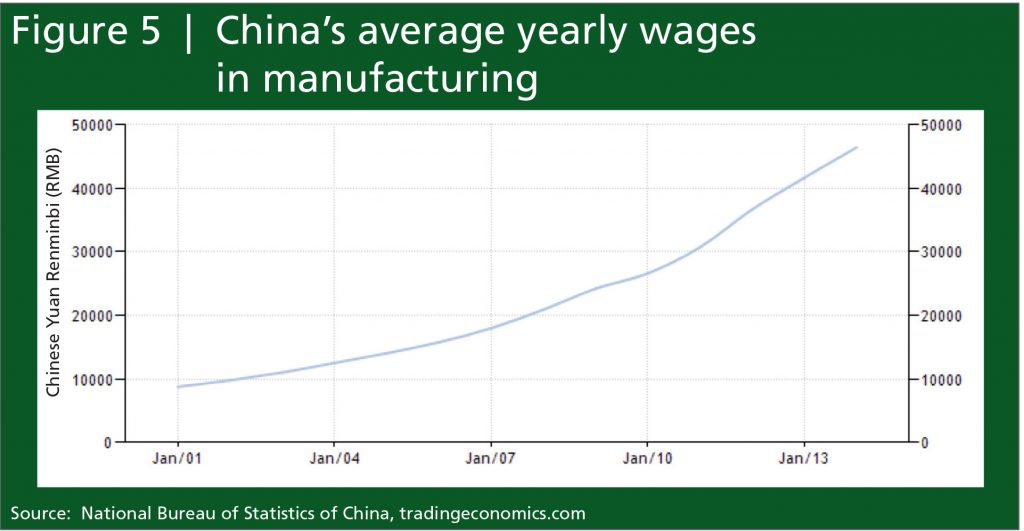 And so recycling stakeholders in the U.S. are now asking a key question: Where’s the next market? Well, there’s never going to be another China. Instead, that growth is going to come from a group of countries. Right now there’s an area where a lot of your demand is going to come from, once things start recovering. The Association of Southeast Asian Nations, or ASEAN, is building infrastructure like mad.

A great example of the shift can be see via the electronics giant Foxconn, which is a fat, flashing red light of development. When Foxconn wants to put a plant in a certain location, it does so because it sees a demand for electronics and a large labor pool in that location. And where are they building? In Southeast Asia, in Indonesia, which has a population of 188 million people.

While there will never be another China, there will be a group of countries, like ASEAN, needing material. And I think 10 years from now, we’re going to be talking about Africa.

The kind of recycling we had during the boom in China is just a stage of development. And with China starting to grow out of that low-wage, low-level manufacturing side and moving up the supply chain, it’s changing. But demand there is not completely dissipating. Chinese companies might not be buying the bales, but they’re looking to buy recycled plastic pellets, and they’re looking to buy paper from lower-wage countries.

It might be uncomfortable to say, “Recycling is all about manufacturing.” But in the end, we all know that if you don’t have an end user for all this stuff, if somebody doesn’t want that bale of paper, that bale of plastic, that bale of cans, it’s meaningless. And the developing world is where the demand is going to come from.

And it’s a good thing. It’s an upward vector for people to actually bring their economic standing up. Recycling programs actually contribute to this entrepreneurship. It’s something to be proud of.

Adam Minter is the Asia-based columnist at Bloomberg View and the author of “Junkyard Planet: Travels in the Billion-Dollar Trash Trade.” His website is shanghaiscrap.com.