Do you speak recycling? 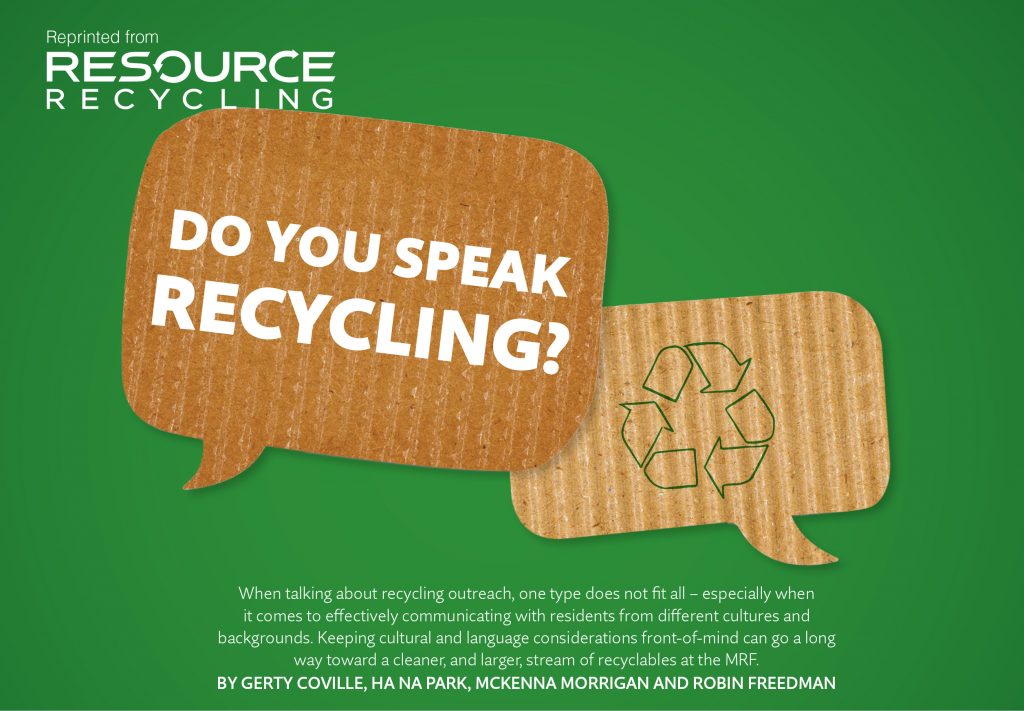 According to the Pew Research Center, the U.S. Hispanic population has been a key driver of the country’s population growth since 2000, reaching a new high of 55.4 million in 2014, or 17.4 percent of the total population. Washington’s King County, the 13th largest county in the U.S., has been no exception to this trend. The Hispanic population now makes up nearly 10 percent of the county’s population and represents the largest group to speak a language other than English. Of those who identify themselves as Spanish-speaking Hispanics or Latinos in King County, nearly 40 percent indicate speaking English less than “very well.”

In 2010, King County adopted the Equity and Social Justice Ordinance, which was intended to provide fair and equitable services to all county residents, including an increasingly diverse residential and business community. Recognizing that recycling services, education and outreach had to adapt to this changing population base as well, King County’s Solid Waste Division embarked on its own effort to engage Spanish-speaking residents in the county. The “Recicla más. ¡Es facilísimo!” campaign was launched in 2011 as the first Spanish-language recycling campaign in the county.

The Solid Waste Division chose to focus on the Spanish-speaking community first because it is the largest and fastest growing community in the area that speaks a language other than English. The County wanted to develop this program and learn how to design, implement and evaluate an education outreach project by using culturally competent design principles. After that was accomplished, these learnings would then be used and adapted to expand the program to reach other language groups in King County.

The development of the campaign began with surveys to 20 key stakeholders, followed by 10 workshops conduced at the homes of Spanish-speaking residents and their friends and families. These workshops consisted of gathering information about perceptions and barriers around recycling within the community while also providing information about effective ways to recycle more, and correctly, at home. In addition, surveys were conducted at Hispanic grocery stores where 365 participants shared their knowledge about recycling as well as their behaviors regarding how they receive or gather information in Spanish. The results of this research became the cornerstone of the campaign design and outreach efforts in the years to follow. Three key findings emerged:

We also learned the audience wants to know what items are recyclable, how to recycle them at home and why recycling is important. In response to the Hispanic community’s needs, King County designed the “Recicla más” campaign with three main components in mind:

Spanish-language tools and materials. The campaign involved the development of Spanish-language recycling tools, such as recycling guidelines, tote bags and water-based tattoos for children with recycling messages. The tools were “transcreated” rather than being simply linguistically translated from English to Spanish. “Transcreation” is what we call effectively communicating to a diverse audience by gaining an understanding of the cultural context, or cultural meaning of imagery, text and format as informed by the particular audience group. For the “Recicla más” campaign, this meant surveying Hispanic/Latino residents to understand which recyclables are found in their homes and visually presenting familiar imagery (see figure on page 23) in the recycling guidelines.

Spanish-language media partnerships. The County implemented a Spanish-language media campaign with print, radio and television partnerships to teach the community what to recycle, how to recycle and why it is important to recycle. Media strategies included not only paid advertising but also in-studio segments and on-air interviews on Spanish media outlets.
Do you speak recycling?
In the last three years, the “Recicla más” campaign generated over 2,000 one-on-one education contacts with Spanish-speaking residents in King County and distributed 12,000 tools, such as the recycling guidelines and tote bags in the community. The media campaign generated over 13 million impressions and conducted 20 interviews, with Facilitadores as expert spokespersons.

In addition, the outreach efforts found that our Facilitadores de Reciclaje had become trusted sources of knowledge within the community. They were sought out by residents and they also provided crucial feedback to program leaders on effective tools of communication and outreach. It was apparent that it was imperative to invest in well-informed, “transcreated” material that properly communicated to its intended audience (see sidebar below).

The campaign initially focused on single-family residents, but findings from initial housing research and from the Facilitadores de Reciclaje revealed a large percentage of the county’s Spanish-speaking population lives in multi-family housing, and that outreach to effectively engage multi-family residents needed to be tailored to address the specific challenges and circumstances of recycling in the multi-family setting. 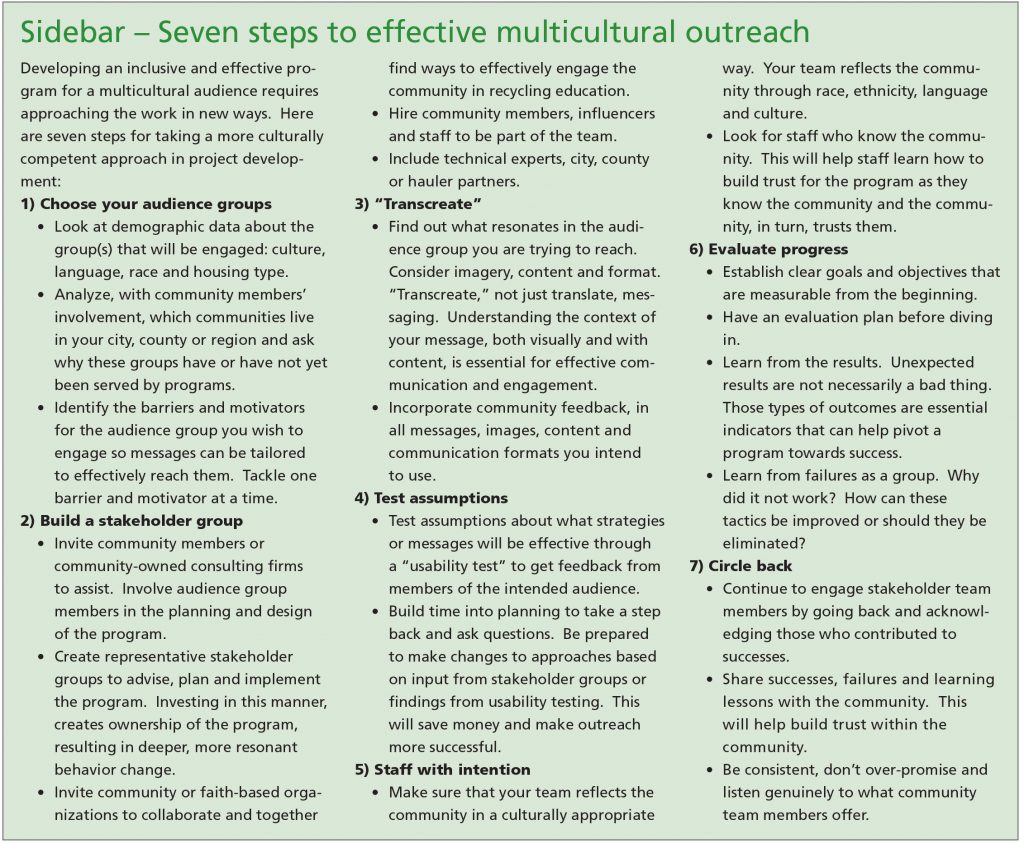 In 2013, Waste Management, King County and Snohomish County created a group of stakeholders, including multicultural consultant firms and several community-based organizations, to pilot an outreach program designed to increase recycling in multi-family housing focusing on Hispanic/Latino residents. The team decided to pilot culturally competent outreach strategies, and the goal was to engage multi-family housing complexes in White Center, a community located just south of the City of Seattle.

The program was designed to use bilingual and culturally appropriate tactics, such as working with key identified community stakeholders and employing bilingual door-to-door resident outreach. The program also used a number of strategies such as improving the existing recycling infrastructure by color-coding, co-locating garbage and recycling containers, providing new decals and posters for collection areas, as well as adding recycling capacity to ensure residents were set up for convenient and easy recycling participation.

The program was a resounding success. Apartment complexes increased their weekly recycling volume by 80 percent. Improvements in the recycling infrastructure at multi-family housing sites included in the pilot accounted for a large part of this increase, as most properties had insufficient recycling capacity, poor container placement, and little to no signage identifying recycling containers at the start of the pilot.

And, yet again, culturally sensitive planning and careful attention paid off. Nearly one-third of all resident interactions at pilot properties were conducted in Spanish. And, according to the follow-up, even residents who had interactions in English felt positive about receiving bilingual materials tailored to their community.

Gerty Coville is a project/program manager for the King County Solid Waste division. She can be contacted at [email protected]

Ha Na Park is a multicultural strategist for C+C. She can be reached at [email protected]

McKenna Morrigan is a senior associate at Cascadia Consulting Group. She can be contacted at [email protected]

Robin Freedman is a senior communications manager for Pacific Northwest and British Columbia at Waste Management. She can be reached at [email protected]