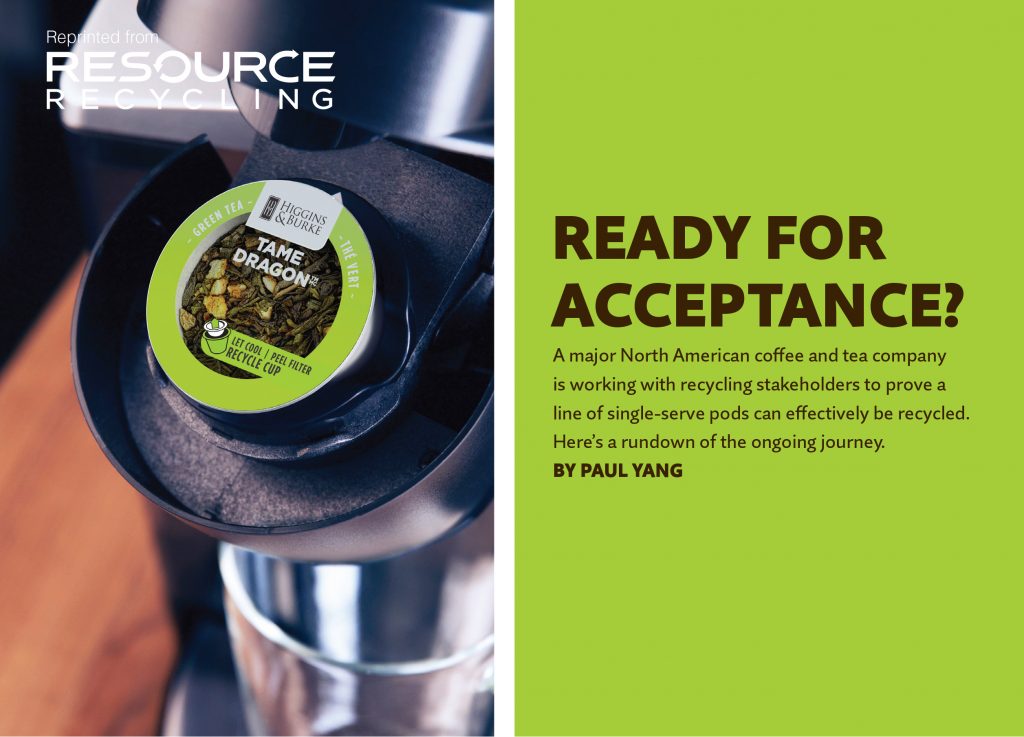 One of the most interesting topics in consumer packaged goods over the past several years has been the explosive growth of single-serve products – in particular, coffee pods. In homes and offices throughout North America, old-style coffeemakers have given way to single-serve machines. Market analysis shows upwards of 12 billion capsules were sold in 2015 with continued double-digit growth year after year.

There are many tangible benefits associated with single-serve pods. From the consumer side, growth has been driven by demand for convenience, consistency, variety and the right size portions. From a business perspective, the profits possible through single-serve pods are too big to ignore for coffee companies, with recent data showing that nearly 40 percent of all North American retail purchases of coffee are in the single-serve format.

However, from a sustainability point of view, the market has been dominated by non-recyclable pods that contain a mixture of materials (technical and organic). Knowing that throwing pods in the trash is not the right long-term plan, what should companies in this space do? If they decide to address it, how can they go about finding a path to acceptance, and how can they ensure the selected process actually works for the recycling sector? How do companies drive positive change, add value to the system and recover these valuable materials? This is the story about one company’s ongoing journey.

A cup of complexity

The path for Ontario-based Mother Parkers Tea & Coffee, which is one of North America’s largest private-brand coffee suppliers, started with the participation in conferences related to waste, recycling, composting, bio-polymers and conventional resins. Before attempting to develop solutions, it was critical to build relationships, solicit feedback and carefully understand the requirements of the different stakeholders within the material recovery value chain. Some initial learnings:

What then does a recycling solution mean for packaging? The requirements of packaging are becoming more complex. In the case of a single-serve pod, the packaging must protect and preserve the product until the time of consumption, but it also plays a functional role in the beverage delivery process when inserted into the brewing machine. A filter inside the pod is designed to provide optimal extraction of the flavor components and aromas as well as prevent the coffee grinds from floating into the finished cup. Once the brew is complete, the pod retains technical and organic components that will need to be separated into clean product streams for recycling to occur efficiently. 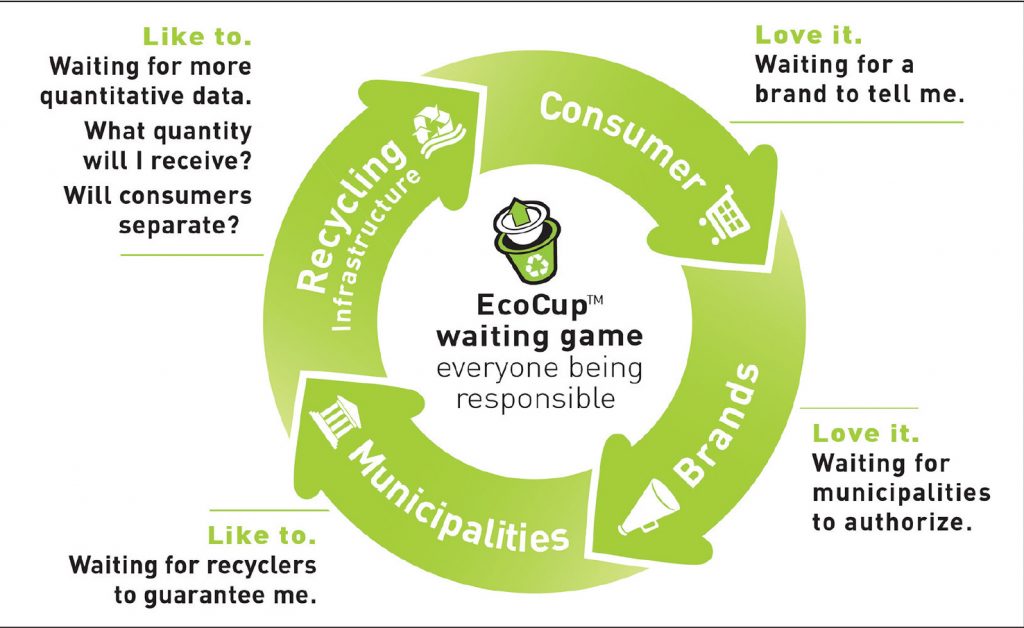 In trying to find a way to move recyclable single-serve coffee pods into the consumer market, Mother Parkers encountered a paradox in which each stakeholder was waiting on another to take action. The situation was dubbed “the waiting game.”

With knowledge gained from research into packaging and recycling realities, Mother Parkers focused on a solution that would not sacrifice any of the primary benefits and would additionally enable consumers to cleanly and easily separate the components. The goal, in other words, was to allow users to recycle the cup, compost the coffee and discard the lid and filter. In 2014, Mother Parkers had an initial launch of its solution, called the EcoCup pod, on its tea-based products. The response was positive: The EcoCup pod received strong design kudos from associations within the packaging and recycling community, winning numerous awards and being featured as a finalist at the 2014 Recycling Innovators Forum at the Resource Recycling Conference. However, in reality, the EcoCup journey was only just beginning.

Concerns from the recycling side

Further feedback from discussions with stakeholders within the material recovery value chain identified a few key areas of concern.

Some stakeholders felt consumers couldn’t be relied upon to discard each component properly – the worry was they would throw the whole item into the waste stream unseparated. Others voiced concern the pods are too small and would not flow through the existing recycling infrastructure. Finally, there were market worries because polystyrene, the resin used to construct the pod, is not perceived as a high-value material.

Mother Parkers actively set out to address these questions. First, the team executed extensive consumer research that confirmed a large majority of consumers said they were willing to separate capsules if they were offered a product that has this functionality and were asked to do so. Secondly, in order to better understand the flow of these types of products through a materials recovery facility (MRF), Mother Parkers engaged with partners to conduct material flow studies in several facilities.

The studies were structured to explore extreme variations that can exist at plants – high/low volume, high/low automation and single-stream versus dual-stream. Separated pods were painted pink and seeded with incoming recycling materials. The initial results showed more than 70 percent of the capsules were available for capture.

On the markets front, Mother Parkers began a project to transition to more highly valued materials that had wider acceptance in the North American context. In the meantime, the team developed wording on product packaging that made it explicit recycling of the capsules was possible only where No. 6 polystyrene is accepted – it’s estimated over 50 percent of North American communities accept the material in their recycling systems.

Municipalities, recyclers and processors were all surprised and impressed with the results of the coffee capsule research and developments toward recycling, but key questions remained. Will consumers make the initial separation? How would materials flow through in a real life (non-seeded) environment?

In short, the project had entered a loop affectionately dubbed the “EcoCup Waiting Game” (see graphic). Without actual market consumer engagement, it would be impossible to get at the data that was being requested to drive broad explicit municipal acceptance. However, before any consumer engagement could be planned, responsible brands wanted that same municipal acceptance. It’s a paradox known well by brand owners that are looking to bring innovative and sustainability-minded packaging into the marketplace. 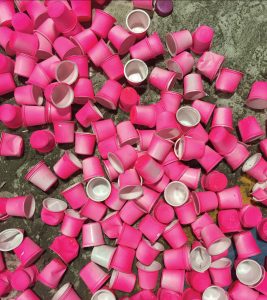 To learn how its single-serve pods would flow at recycling facilities, Mother Parkers painted pods pink and inserted them into the stream of incoming materials at MRFs.

This challenge was addressed in part through efforts in Canada. In British Columbia, separated single-serve pods of all types are explicitly accepted in the majority of communities. The recent introduction of a province-wide recycling program funded and managed by producers helped shed some important light on the current lingering questions and drive new learnings for recycling newer packaging like single-serve pods.

In the fall of 2015 Mother Parkers partnered with Tim Hortons, a major coffee retailer, to launch and advertise Tim Hortons single-serve EcoCup pods province-wide. The launch consisted of a robust consumer awareness and education campaign that included live consumer recycling demonstrations at malls, a TV spot, a PR campaign, billboard displays and digital promotion focused on a Tim Hortons website dedicated to recycling. Also included was a promotion that ran on Tims TV in British Columbia restaurant locations (Tims TV is an in-store channel that features Tim Hortons-produced content).

Wider separation study on the way

To take full advantage of the real world example in British Columbia, Mother Parkers and Tim Hortons partnered with Multi-Material BC (MMBC), Green By Nature (GBN) and Merlin Plastics on a recycling study to track how the pods flow from homes to existing recycling facilities. The goal is to track and measure the separation of these pods in an effort to demonstrate how this packaging could be accepted and successfully integrated into recycling programs in other municipalities across North America.

In early 2016, the team will share results from the recycling study along with best practices and key lessons as this journey takes an important step.

Paul Yang is manager of packaging for Mother Parkers. He can be reached at [email protected]