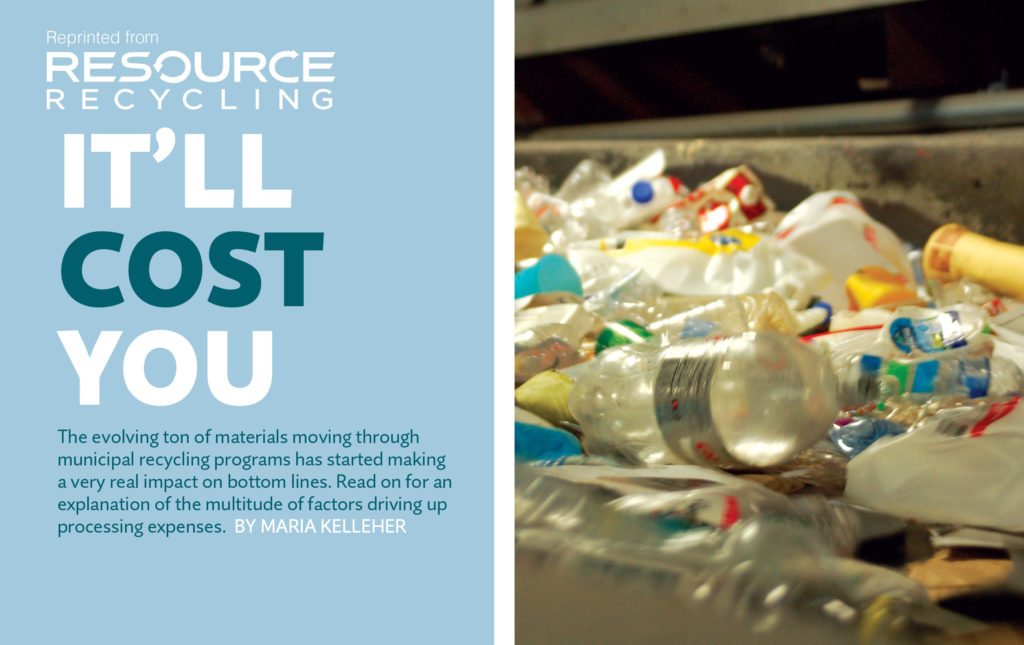 In 2010, the City of Toronto approached me with a query. Recycling tons were down, and organics tons were down, but garbage tons were also down, meaning the falling numbers couldn’t be simply attributed to residents tossing recoverable materials in the trash. What was going on?

This led to a study on the future of curbside recycling collection (outlined in a 2011 Resource Recycling article) that looked at societal and lifestyle trends as well as future factors that might affect diversion tonnages and revenues over time. We predicted a reduction in newsprint in recycling systems as more news was accessed online and more plastic recovered as consumers demanded smaller packages, more prepared food and re-sealable packaging at the same time that packaging designers were lightweighting. These predictions were factored into a City of Toronto 15-year business plan.

In 2014, the City of Calgary noticed that tonnages in its curbside recycling program were not increasing, even though the program was adding 5,000 households per year. Concerned it would struggle to hit the 80 percent landfill diversion target it had set for 2020, the City commissioned a study to see if recycling trends could be identified that were not unique to Calgary, and should be factored into longer-term waste management planning. I was part of the CM Consulting team that completed that recycling trends analysis, which concluded Calgary was not alone. Programs throughout North America were experiencing a tectonic shift in the mix of materials in their recycling programs – generally less printed paper and more plastic – and this trend was having an impact on diversion rates as we currently measure them. The trend is now viewed as the new reality in recycling – it’s called the evolving ton.

Now that we know the factors behind the shift in materials, it’s time to ask: What does this mean for curbside recycling program costs? The short answer is costs are increasing and will continue to increase. While the evolving ton is responsible for many of the costs increases, other factors are also at play: falling oil prices, softening commodity markets and China’s Green Fence, the effects of which have considerably tightened up the market for mixed paper and mixed plastics.

Recycling folks believe we are seeing a “perfect storm” of forces which are having a significant impact on recycling program diversion and costs. Because these trends are not changing, the industry must plan for a future of higher recycling program costs, at least until markets and technologies catch up and adapt to today’s challenging material mix.

The decline in newsprint is one of the two the most significant aspects of the evolving ton (the other is the increase in plastic). Newsprint was always the backbone of recycling programs – cheap to collect and process, and with good revenues. The fact that it is declining, and will continue to decline is something we need to plan for. The bottom line is that less newspaper means recycling costs will go up.

In the early days of recycling, newspaper made up 80 percent of what some MRFs handled. Now it might make up 38 percent, and this number is dropping. I spoke to one operator that takes material from a program where newsprint used to make up 45 percent of the tonnage and now that segment is only 5 percent. A recent statistic for the U.S. showed that newsprint made up more than 40 percent of tonnages in recycling programs. Now that number is less than 25 percent in many locations.

What this has meant for MRF operators is that it is more difficult or impossible to create a No. 8 news bale. MRFs now produce a No. 6 news bale, which has specs that are easier to meet but garners lower revenues. Mills are getting used to this change, as they need the fiber. They pay lower prices for the lower grade bales and then often spend more money themselves cleaning the bales up and disposing of residue.

Another fiber factor is the exponential rise in Internet shopping over the last five years. Online purchasing is projected to increase at a compound annual growth rate of 10 percent for the next five years in the U.S., growing from an annual value of $248.8 billion in 2014, according to Forrester Research. These goods are delivered to consumers in corrugated or boxboard packaging, resulting in a growth in OCC and OBB in recycling programs. While both of these packages are recyclable, OCC in particular is bulky and takes up a lot of space in collection trucks, thereby increasing recycling program costs.

More work to produce each ton

While online shopping and digital media consumption have changed the amount of newsprint and OCC/OBB in recycling programs, three other huge changes are happening on the packaging front – lightweighting, new packaging formats and smaller/re-sealable/single-serve packaging formats. These trends mean a recycling company must process more individual items to get one ton of product to sell to markets, which buy based on weight. Furthermore, new packaging formats are often not yet recyclable, or recycling markets do not pay much for them. Some of the smaller/re-sealable packages, for example, are made from multi-layer materials for which markets do not yet exist.

A good example of lightweighting can be seen in a typical PET bottle, which now weighs about half of what it did 20 years ago. One processer I spoke to recently said the weight of a single PET bottle went from a full ounce in 1978 to 0.66 of an ounce in 2000 to 0.28 of an ounce today. Geoff Rathbone, formerly of City of Toronto, has said it used to take 35,000 PET bottles to make up a metric ton of PET; now it takes 70,000. It other words, it takes twice the work to make the same amount money. Not only that, modern PET bottles often flatten in the truck, causing MRF screens to push the plastic items into the paper stream. This contaminates the paper bale (which makes the paper market unhappy and results in lower revenues) and also results in lost PET revenue. This might be considered an unintended consequence of lightweight packaging.

Now let’s talk about new packaging. The most noticeable example of the recycling-cost consequences of packaging innovation is perhaps the huge increase in the use of thermoform PET clamshells for vegetables and fruit. MRF operators report to me that such packaging has increased dramatically in incoming streams over the last two years. While these packages are great from a life cycle point of view – they protect the produce – they are a problem in the recycling system for a few reasons. They take up a lot of space in the recycling truck and are expensive to process at the MRF because of their low density. The revenues generated by the recycling of these thermoforms are low at this time and will likely remain so until markets are better established. 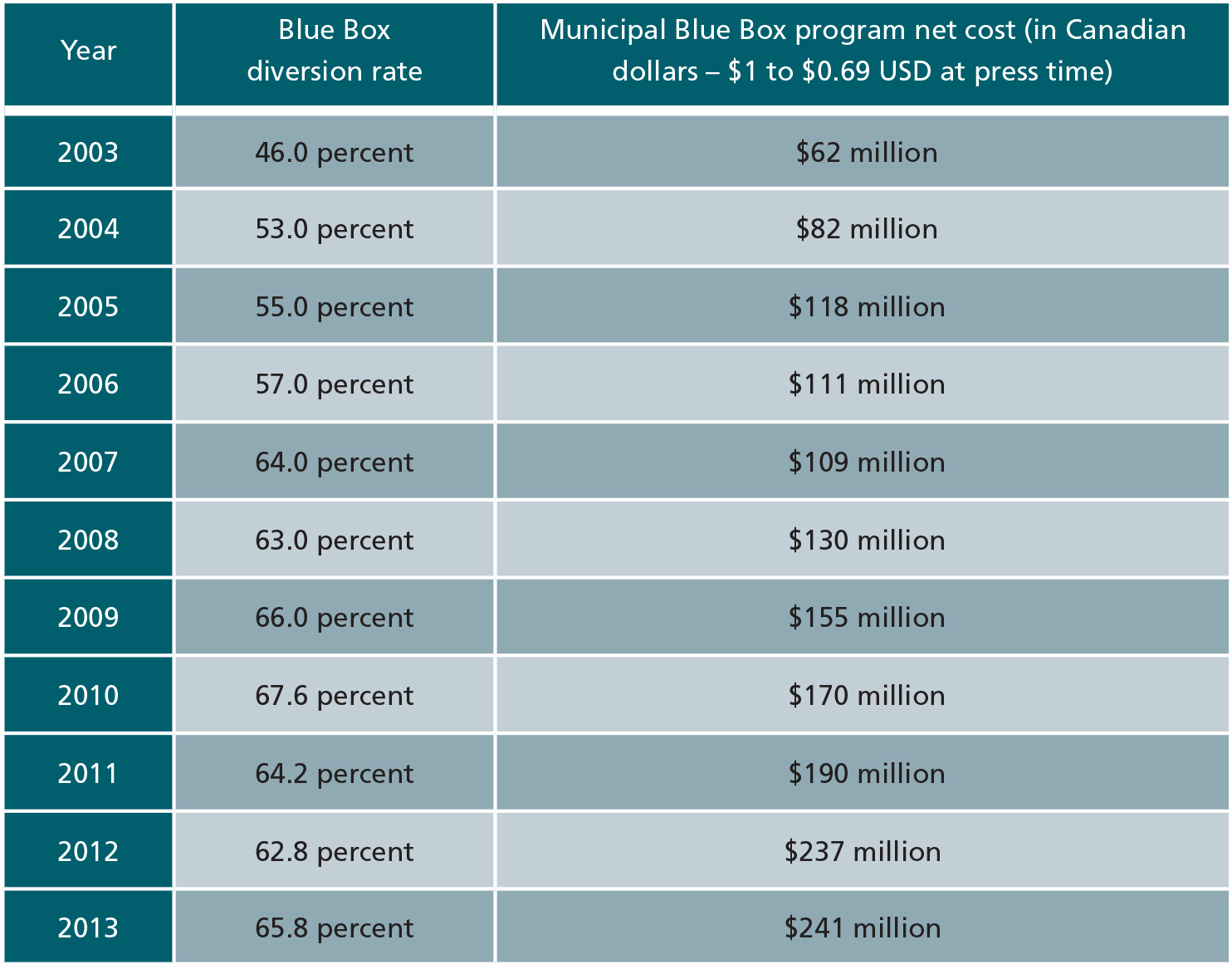 Until about 2010, Ontario Blue Box costs were increasing annually, but these increases could be explained by the fact that materials were being added to the program and diversion rates were increasing.

2011 was the first year that the impacts of the evolving ton of recyclables kicked in. Paper was dropping and plastic was increasing. There was more light material like plastic in the curbside collection program and less heavy material such as glass and newsprint. Because diversion is measured as the weight diverted divided by the weight generated, diversion rates started going down. They recovered somewhat in 2013, and 2014 figures have not yet been fully verified.

On the reported cost front, a significant jump (CA$47 million in one year) was seen between 2011 and 2012. While some of the cost increase was related to various adjustments and declining revenues, the huge jump can be mainly attributed to new recycling contracts that called for substantially higher costs as the market attempted to adjust to the realities of the evolving ton. Some contractors were stuck in five-, seven- and 10-year deals that had been bid around 2005, and those contracts were written with an eye on a material mix that had remained fairly static for years. Contractors had little opportunity to adjust to the increasing costs and higher contamination resulting from the changing material mix. Also around 2012, China’s Operation Green Fence came into full force, tightening up specifications – and therefore processing costs – for mixed paper and mixed plastic being shipped
to China.

Putting practices in line with the new norm

We need to adjust and adapt to the fact that we have more plastic and less paper in our recycling programs, and this is not going to change. While other recycling cost drivers go up and down (cost of fuel, the value of the dollar and other economic factors), this change in the material mix is permanent. We are likely to continue in a direction of even more plastic and multi-layer packaging and less printed paper as electronic media becomes the delivery mechanism for communication within society. The recycling ton has evolved, and now contracts and profit expectations are undergoing their own set of major shifts.

Maria Kelleher is principal at Toronto-based Kelleher Environmental. She can be contacted at [email protected]