This story originally appeared in the January 2016 issue of Resource Recycling. 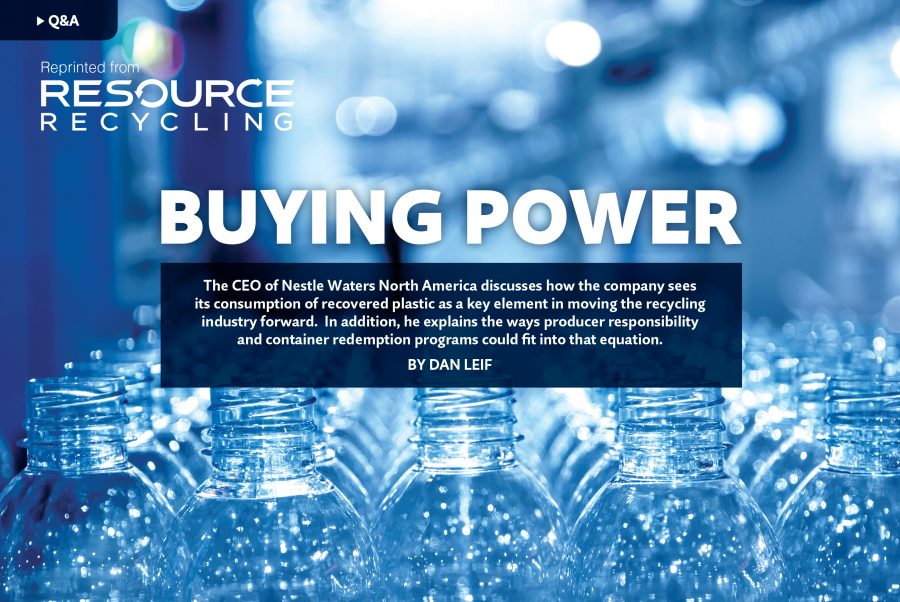 Recently, the CEO of Nestle Waters, Tim Brown, had an extended conversation with Resource Recycling about the water company’s long-term plans when it comes to post-consumer plastics. The executive opened up on the feasibility of industry recycling rate goals, the long-term corporate economics of using recycled material and why he thinks some container redemption systems are better than others.

Resource Recycling: Nestle Waters last year announced its Arrowhead brand would be boosting recycled content in most bottle sizes and that bottles would be made with up to 50 percent post-consumer material. What sparked that action? 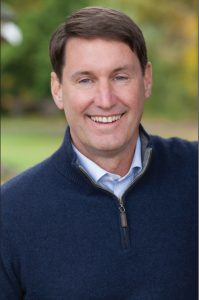 Tim Brown: With the opening of the CarbonLite plant in 2012, it enabled us for the first time to significantly use rPET in packaging. What we targeted at that time was one SKU, which happens to be our largest-selling size: 16.9 ounces. We wanted to understand both the operating model as well as any other considerations – quality, consumer acceptance and other factors. That initial step has worked well for the past three years, and we felt confident taking the next step, which would be to expand it to all single-serve PET bottles for our Arrowhead brand produced in California. We happen to believe the vision and destination for packaging is a closed loop. It’s part of a circular economy, and rPET we think is the most sustainable future packaging format for portable beverage containers.

When you say “closed loop,” what do you mean exactly? That term has different meanings to different people.

It’s having an idea of bottle-to-bottle. There is the capability today – and we see much greater capability in the future – to repurpose PET to take old bottles and reconstruct them into new bottles. That’s our vision of closed loop. That’s not always the case with other materials, such as aluminum and glass. With other materials, there are closed loops, but it isn’t quite as literal as the material being repurposed into the same product. The repurposing of PET today is often some other format – some might call it downcycling or reuse for energy. Our version of closed loop is bottle-to-bottle. I don’t think it’s beyond reach we might someday be talking about upcycling and taking the PET material in fibers and upcycling them into bottles. But our short-term vision really is a bottle-to-bottle world and system. And then it gets enabled and improved by technology.

What is Nestle Waters’ role in helping such improvements take place?

Our primary role is to create the market for converters like CarbonLite to invest in technology to be able to do this, but then there’s another important role, which is to work side-by-side with them to improve their processes step by step. We’re a very rigorous quality-control company that measures discrete levels of any imperfection in the material at all stages – pre-conversion, converted and then the finished product. We’ve been working with CarbonLite to constantly improve the process, so it has no defect, it’s hygienic, it’s food safe and it performs well. And not only have we been using rPET, but we’ve been lightweighting at the same time. To get the material to perform at lighter weights on par with what virgin material would perform at is an interactive process we’ve been working on collaboratively with CarbonLite.

Product manufacturers of all kinds have over the last decade or so moved aggressively into lightweighting, and many view sustainability as a topic that extends far beyond using recycled material. Where does recycling fit into the sustainability conversation for Nestle Waters?

It is a tie for the number one most important consideration. Our two critical sustainability issues are materials – which includes recycling and the use of rPET and ultimately building more sustainable packaging systematic models – and the other is water resource management. They have a lot of similarities. For starters, water resource management is fundamentally based on conservation and good water stewardship practices, but inherently there are closed-loop elements built into that, and it has a lot of similarities to the circular economy on packaging materials. What we believe is that we need to prove that in our own facilities, but we also need to be part of a scientific and collective community to build better water-recycling systems. In an urban setting that could be the use of gray water or the better utilization of waste water in many different ways.

Moving back to PET specifically, your company has made some commitments to an industry-wide recycling rate of 60 percent for PET bottles by 2018. How feasible do you feel like that is right now?

There’s certainly a number steps we’re taking as an individual company and as an industry, both a bottled water industry and a beverage industry. As a company, the most critical step we’re taking is using rPET and creating the example of the closed loop. Additionally, though, we need to improve education and awareness. I will say the biggest gain in the last five years has simply been to educate the public that the material is recyclable, and that awareness leads to changes in behavior of people to make sure it gets in the right place – in the blue bin or in the right slot in a container on the street. We also then need to improve recycling systems and that can be done through extended producer responsibility initiatives, that can be done through the MRF system and that can be done through improvements in single-stream [collection of recyclables]. As an industry we have to do in parallel all of these things – awareness, advocacy, systems – it all needs to happen concurrently.

But is 60 percent a feasible goal for PET bottles? The most recent NAPCOR report on PET containers showed the recycling rate was around 31 percent.

Our figures show bottled water is at 37 percent, so water bottles are getting recycled at a higher rate than general PET. I wouldn’t give up on 2018. We’ve got three years left, and it’s been five since we put the goal out. The rate was approximately 20 percent at that point, and we do have some stretching to do to get there. But I don’t think it serves a purpose to retreat from the goal at this point.

Where does your company stand on extended producer responsibility for packaging at this point? That’s a concept Nestle Waters has advocated for on some levels in the past, but we haven’t heard much of late.

We’re supportive of EPR, but we also recognize the issues around recycling and waste management are very local. Realistically, each model and each conversation is different. While it would be great to think we could do this once, we have to do it state-by-state. And it has to be adapted to the conditions of each state.

The area we’d like to see evolve in the EPR conversation is the second half of the loop. If you think of a closed loop, much of the impetus and dialogue is on the pick-up side and handling to control litter and direct post-use. Not much attention is directed to the second life of these materials. The ideal system would have more standalone features – it wouldn’t be funding other governmental mechanisms, and we think it could potentially be operating in the black. Then it could be used to promote more public space recycling and things like that. As part of that, EPR should create opportunities if you want to use the material again. That would imply some kind of exchange system where producers access the material and buy it at a price representative of the cost they’ve already put into it.

So you’re saying if a company is funding the system, it should have some advantage in getting the material back?

Exactly. If I’m paying to have it picked up, I ought to get a better price to reuse it. Then you’ve got a systematic incentive to do more of it, to do more post-use, to do more closed loop. And right now there’s not a system that exists that really focuses on the next generation of the material. California is the closest thing. The California redemption model is probably the best working model in the country. Given the state incentives on post-use material, in essence those incentives are there. They’re just not all part of the same construct.

You see the California redemption system as systematically better than those in other states?

Very much so. It’s more cost-efficient, and it’s less burden on the consumer. California is a far superior system than any other deposit system we’ve seen in any other state. The proof is in the rates. If you look at it from a brand standpoint, we’re attracted to it because it’s more cost-efficient, but from an environmental standpoint, I think everyone should be more attracted to it because it’s delivering higher rates.

If another state were to propose a container redemption system that is very much in line with what’s in California, would Nestle Waters support it?

We would certainly be engaged. And I think there are certain pillars we would really want emphasized. First of all, it would be the emphasis on reuse or second life. The second thing would be the cost efficiency of the system. And the third thing would be the expandability of it. So much of EPR has been focused on beverage containers, and if you believe like I do that almost all material has the ability to be reused, then we need to build expandable models. Taking back everything to the place you bought it potentially isn’t the most expandable model as you move to other containers and other materials.

You noted earlier that your company is committed to being a consumer of recovered plastic. As a whole, is the recycling industry doing enough to satisfy your material needs?

Are you drawn to use recycled content because consumers demand it, or because it simply makes sense economically?

It’s more the latter. Long term, we think renewable resources are going to be cost-advantaged over non-renewable. At any given point in time that may or may not be the case. At this point in time, it’s not really – because of the low price of petroleum. Long term, we think a system needs to be built for two reasons. Due to the equation of energy and scarcity of resources, we believe renewables will be more cost-effective, and we want to be in a position as a company to source the best possible material. We also recognize a system needs to be built and someone’s got to go first. A lot of what we’re doing with CarbonLite in California is model-building or system-building for circular economies. We think the momentum built with players like ourselves will help create systems to make circular economies possible.