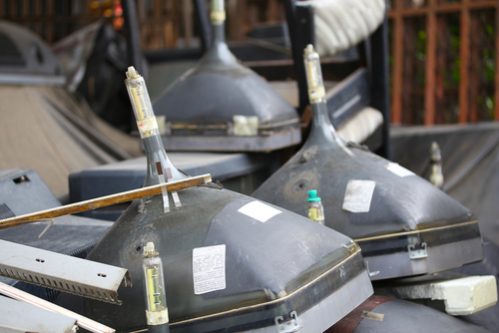 We may have gotten it all wrong. After almost two decades spent on setting up a policy framework to ensure that CRT TVs and monitors were sent to proper recycling channels, millions and millions of pounds of CRTs are instead stacked in warehouses across the country.

Over 158 million pounds remain abandoned in the Columbus, Ohio sites of Closed Loop Refining and Recovery alone. And landlords for those sites are using litigation to try to make processing companies pay for the cleanup.

The question now: Does federal Superfund legislation, called CERCLA, apply? And will protections cover actors who did their due diligence and acted responsibly, even as the wider system around them fell apart?

From state programs to Superfund liability

Many, including myself, in years past advocated that the CRT glass market was simply a question of cost, not capacity. Everyone knew that CRTs were a problem due to their negative cost to recycle. Most of the CRT volume ran through legislated state programs, leaving the OEMs holding the bag to fund recycling of the material (the exception has been California, where an advanced recycling fee paid by consumers of new devices funds e-scrap recycling).

The producer responsibility laws were supposed to drive greater design, incentivizing competition among the OEMs. That didn’t happen. From the beginning, manufacturers resented their liability and found working with recyclers a challenge at best. Meanwhile, desperate for volume, many recyclers fell over themselves to secure OEM tonnages directly or indirectly.

And the problems ensued: “ghost volumes,” “paper volumes,” “the magic ton.” A complete and utter disaster.

So many recyclers have privately expressed dismay to me. Their stories often follow a similar narrative. Many, but not all, were relatively new to the business. They had secured a contract with a local school or a business, and then very quickly the CRTs started coming in. They looked around at the market, got certified to R2 or e-Stewards, and sent their CRTs to “approved” yet limited downstream markets: perhaps first to Samsung Corning in Malaysia, then to Dlubak in Yuma, Ariz., then to TDM in Mexico, then to Closed Loop in Phoenix and Columbus, and finally to Camacho in Spain.

All of these downstream outlets were more or less doing the same process, rendering intact CRT tubes into “furnace ready cullet.” That is, they were creating a raw material, a specification-grade commodity that can replace virgin raw materials, like anglesite, in the industrial minerals markets. In fact, even CRT manufacturers like Videocon, Samsung Corning and Erkanos commonly traded CRT glass as an industrial “lead salt” rather than use it in their own furnaces, believing exchanging it for virgin material might prevent “stones” in their CRT glass furnaces.

But a number of e-scrap companies are surprised to learn that even if they checked all of the responsible recycling boxes, did their due diligence, were audited and worked with certified companies, they still could be subject to the Comprehensive Environmental Response, Compensation and Liability Act (CERCLA) of 1980, likely the most stringent environmental law in the world.

CERCLA, also called the federal Superfund law, is designed to investigate and cleanup sites contaminated with hazardous substances and have potential responsible parties (PRPs) pay for it. And it is this law that the Closed Loop Ohio landlords are invoking to try to force payments from electronics recyclers that supplied CRT material to their properties.

What makes CERCLA so harsh is that if it applies, it assigns strict, retroactive and joint liability for any and all PRPs for hazardous waste cleanup (and, yes, in the case of CRT stockpiles, this could extend to OEMs).

Once you become a PRP, even if you only shipped a small percentage of CRTs, your company is legally liable for 100% of the entire cleanup.

Another law that gives potential protection

Concerned with the potential devastating consequences of CERCLA, two decades ago the Institute of Scrap Recycling Industries mounted perhaps its most successful legislative effort ever. Its goal was to provide unique protections for the scrap recycling industry, including electronics recyclers.

Signed into law in 1999 by President Bill Clinton, the Superfund Recycling Equity Act (SREA) provides relief from CERCLA if a recycler can demonstrate that a certain level of due diligence and reasonable care was met. For years, ISRI has urged its members to participate in the group’s voluntary SREA Reasonable Care Compliance Program.

Compliance with CERCLA is challenging as it is inherently difficult to predict what a downstream facility will do years in the future. Many existing Superfund sites in a variety of industries operated legitimately for years, processing raw materials (virgin or scrap) into commodity metals and industrial minerals.

There is also the fact that there were e-scrap entities that raised their voices to regulators and others when it became clear Closed Loop was not on the path to building out reliable furnace technology. We might call these entities industry whistleblowers.

Let’s consider a recycler that followed the federal CRT Rule to the letter, ensuring that its downstream processors moved 75% of its volume on a yearly basis. The recycler also performed other steps of due diligence, following requirements in R2 and e-Stewards, while also paying market rates to outlets producing furnace-ready cullet and refusing offers to pay less.

Would it make sense for this recycler to still be liable?

The answer to this question remains unsettled. As SREA does not automatically protect any recycler from becoming a PRP, the burden of proof rests on each individual recycler. There is no blanket protection. It’s up to each company to put forward the evidence needed to show that they took appropriate reasonable care.

Let’s be clear: A reputable recycler should be diligently monitoring its own CRT glass to make sure it is actually being processed. The 75% in 365 days CRT processing “speculative accumulation” requirement applies to each recycler’s volume and to the glass processor’s total volume. If not met, the conditional exclusion from solid and hazardous waste is lost, and the CRTs must then be managed as a hazardous waste. Once a site filled with “hazardous waste” is abandoned, then CERLCA may apply.

But if a glass processor’s “speculative accumulation” violation in 2016 makes a lawful ton of CRT tubes shipped in 2012 “retroactively hazardous waste,” then the federal CRT rule is essentially worthless in guarding against CERCLA. Once CRTs have been processed into furnace-ready cullet, SREA should protect a recycler that supplied that material from retroactive accountability. We shall see.

Time for regulators to reassert themselves

Federal EPA and state regulators know or should have known the difference between acceptable furnace-ready cullet for copper or lead smelters, tile manufacturing, or glass-to-glass manufacturing, and that of unprocessed, speculatively accumulated intact units. They have been silent too long. Now they have an opportunity to reassert the initial CRT policy intentions, in order to separate certain conduct and provide mitigating distinctions to the judicial process.

If nothing else, decision-makers ought to help the good guys, the whistleblowers who got out early and tried to warn others before the gaylords started stacking high in Columbus.

If CERCLA applies to any supplier of Closed Loop, regardless of the due diligence exercised, then the only true way a company could protect itself from CERCLA liability in the future is to either export material out of the United States, since CERCLA only applies domestically, or to landfill it as hazardous waste.

One has to wonder if all of the work to regulate CRTs has done any good at all.

Eric Harris runs Lone Star Consulting and is working with e-scrap company defendants named in the current Closed Loop lawsuit. He can be contacted at [email protected]