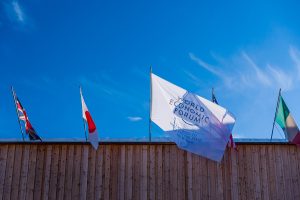 End-of-life electronics received attention at the World Economic Forum meeting this month. A report from several global entities called for a systemic change to stem rising volumes of unrecovered devices.

The report, titled “A New Circular Vision for Electronics: Time for a Global Reboot,” was authored by United Nations entities, the Basel Convention, the International Telecommunication Union and other stakeholders.

The World Economic Forum is a nonprofit organization that describes its mission as engaging “the foremost political, business and other leaders of society to shape global, regional and industry agendas.” Its annual meeting was held in Davos, Switzerland last week. E-scrap management was one of numerous environmental issues discussed during this year’s forum.

The organizations that wrote the report are collectively part of the E-waste Coalition, a U.N.-led group formed last year that seeks to “increase cooperation and more efficiently provide support to member states and parties to address the e-waste challenge,” according to the document.

The report paints a largely unflattering view of e-scrap management worldwide, and it focuses on the potential benefits to improving the current system.

“In the short-term, electronic waste remains a largely unused, yet growing, valuable resource,” the authors wrote. “Nearly all of it could be recycled. Urban mining, where resources are extracted from complex waste streams, can now be more economically viable than extracting metal ores from the ground.”

The report brings wider attention to a handful of topics likely familiar to those in the e-scrap industry. For example, it explains that:

The information was presented as grounds for a systemic change in how end-of-life electronics are managed. The report urged building a circular economy for electronics and stated such a mechanism can consist of numerous components, including:

The potential of electronic devices as a service, rather than a product, also received some attention in the write-up. Noting the rise of other service-based models that promote dematerialization – such as Netflix for entertainment, Uber or Lyft for transportation and Airbnb for short-term rentals – the report points to similar services for electronics and and suggests that model could grow in the future. Current services in that sector include Dell’s “PC as a Service” program in the U.S. and Fairphone’s leasing system in the Netherlands.

In conjunction with the report’s release, U.N. Environment, the Global Environment Facility and the Nigerian government announced a $2 million investment “to kick off the formal e-waste recycling industry in Nigeria.” The initiative hopes to leverage an additional $13 million from the private sector.