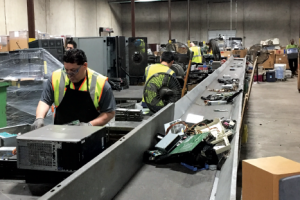 When CompuCycle leaders looked at automating the company’s e-scrap processing, they realized there was no point in reinventing a well-functioning wheel. Colt Recycling, which has done business with CompuCycle, was already successfully using a custom-designed shredding and separation system in New Hampshire.

Thus ensued a partnership through which Colt will design and install a system for CompuCycle.

“CompuCycle will be the only facility in Houston and one of the only facilities in the state with a sophisticated, state-of-the-art shredder line with an eddy current system and optical sorters, producing raw materials to be sold into the recycling marketplace,” said Clive Hess, CompuCycle executive vice president.

The system is the next step in CompuCycle’s recent growth.

Originally founded in 1996 by John Hess, an immigrant from South Africa, CompuCycle was purchased in 2013 by his son and daughter-in-law, Clive and Kelly Hess. In March 2018, the company moved from its former 50,000-square-foot space into an 80,000-square-foot facility in northwest Houston.

It recently bought a nearby 40,000-square-foot space to house the shredding and separation system, bringing CompuCycle’s total square footage up to 120,000 square feet.

“The expansion of CompuCycle this past year has been tremendous,” said Kelly Hess, company president and CEO.

With 75 employees, the company provides ITAD/ITAM services for businesses nationwide and recycling of locally generated residential material. It is certified to the R2 standard.

The company’s reuse side of the businesses focuses on refurbishment, parts harvesting and data destruction. It processes 8,000 to 10,000 devices per month. The recycling side involves manually dismantling nearly 20,000 pounds per day.

The new system will be capable of processing up to 40,000 pounds a day, generating streams of metals, printed circuit boards and plastics. Through the partnership, Colt is designing and installing the system and helping CompuCycle sell recovered commodities to Colt’s downstream buyers.

“As China is no longer accepting various grades of scrap, CompuCycle’s ability to upgrade e-scrap into marketable products is of great benefit to our clients,” Clive Hess said. “Electronic OEMs and other corporate generators of scrap will have a certified outlet for shredding their materials in Houston.”