Q&A: It takes a village to stop e-waste burning

For years, the global e-scrap industry has been presented with examples of crude processing of end-of-life electronics endangering people and the environment in places such as Accra, Ghana and Guiyu, China.

Of late, similar concerns have been raised about an area of the West Bank near the Israeli border. In July 2017, a European Union-backed report on Israeli mismanagement of e-scrap touched on the issue of impoverished Palestinians using open burn sites to harvest metal from cables and other e-scrap components. In many cases, that material was collected in Israel and brought to the West Bank villages of Idhna, Deir Samet, and Beit Awwa, located near the large West Bank city of Hebron.

Also in 2017, E-Scrap News published a feature article on the West Bank burning situation, written by U.S.-based e-scrap consultant Anne Peters, who had visited the region to meet and educate stakeholders as well as to engage in dialogue around the issue.

To better understand how Palestinians themselves approaching the realities of e-scrap burning, E-Scrap News talked with Akram Amro, a professor of physiotherapy at Al-Quds University in the West Bank and a founder of the Green Land Society for Health and Development, a nongovernmental organization that recently opened a recycling education center in the village of Idhna.

E-Scrap News: What is your goal when it comes to addressing burning?

Akram Amro: We are working to shift people to more environmentally friendly processing, like wire stripping and shredding and selective import of different e-waste elements. It’s a challenging process because we are talking about shifting people’s attitudes. And we are dealing with people who, in some cases, did not finish more than six years of school. So it’s not easy to link lead and copper to carcinogenicity and cancer peaks for them. We have been doing this since 2010.

And I imagine people take part in this kind of processing because they are desperate for money?

Yes. I can come and talk to workers about the benefits of stripping and how this saves lives and [creates a] better environment. But at the end of the day, I’m not giving a worker the bread for his children’s dinner tonight. I’m just coming from the luxury of academia. What alternatives did I bring to him that he can afford? There are no punishments and incentives in shifting. All the benefit to him comes through doing what he is doing, which is burning. 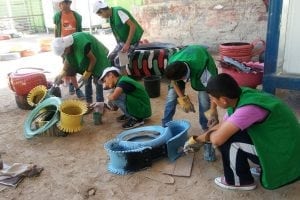 A recently opened education center outside of Hebron in the West Bank helps demonstrate the value of recycling to school groups and others.

How do you get people to actually make that behavior shift?

We manage to do a kind of social pressure that is aimed at burners. The burners are not afraid of us or affected by us. But we are seeing the problem decrease due to the community that we have been working with intensely over the last eight years. We connect with women to help bring a point of view to influence their husbands. We explain how burning affects the quality of water they drink and what should they do with the clothes when the father comes back from doing the burning. They learn it affects the children when you wash those clothes with other clothes.

And that pressure seems to be working?

In the past, you would never go to Idhna in the evening without seeing a high column of smoke up in the air. It would be two or three burns at certain spots continuously. And now when we look there, it’s not as before. People try to move toward the separation wall between Israel and Palestine to do the burning there, which means there is really a shift, a change and pressure taking place to stop the burning. This has been evident in a decrease in burning incidents and the movement of burn sites to more distant areas.

Tell me more about the education center your group established.

We want people from Hebron to come to the villages and see the e-waste littering the land outside between the businesses, between the workshops, and then come to our education center. Then it becomes relevant when you talk about it. We also want them to see the consequences. When you talk to someone about agricultural lands lost and he’s in the place, he will see burn sites and a mountain of e-waste. He will see it’s a huge issue. It’s not just an academic discussion.

On top of that, we have a live exhibition of recycled material. We show them a sofa made out of recycled material, for example. People can learn more about issues of reduce, reuse and recycle. Schools from Hebron and even as far as far as Bethlehem [roughly 17 miles from Idhna] are coming to the education center. We still have big dreams for the center. But working without funds is like choking it. We are looking for help to keep it sustainable.

Are you satisfied with the results of your eight years of work on this issue?

We’re changing the community. Social pressure is a big issue. I think social pressures shifted the issues of alcohol drinking and drugs and other phenomena. It’s not always fair to put those things in the same category as e-waste burning, but somehow it is. Somehow they are the same, in terms of the harm and what you do to yourself and others, in terms of the limits of having freedom to do what you believe in while it affects other people. I think we need to continue.