Brand owners, government leaders, trade associations and others are increasingly referencing the notion of a circular economy when outlining goals and strategies.

At its most basic level, a circular economy is a system geared toward recovering materials and efficiently moving them back into the supply chains for new products and services. But the phrase also conveys an expansiveness that makes it hard to connect to specific actions. If a state or country or planet is trying to develop a single circular economy, who organizes it and what can individual stakeholders do to contribute?

To get some answers, E-Scrap News talked with Mathy Stanislaus. He was until recently the solid waste chief at the U.S. EPA, serving as assistant administrator of the EPA’s Office of Land and Emergency Management during both terms of the Obama administration. (The Office of Land and Emergency Management was formerly known as the Office of Solid Waste and Emergency Response, and it oversees a wide range of programs, including sustainable materials management, hazardous waste, superfund sites and brownfields.) 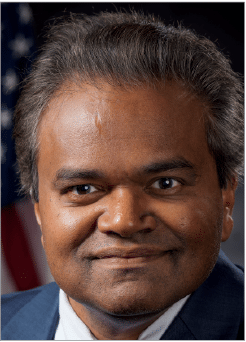 What follows is an edited transcript of the conversation.

E-Scrap News: How would you describe your current job?

Mathy Stanislaus: My role has been senior advisor on the Platform for Accelerating Circular Economy, which is an initiative that was started at the World Economic Forum in Davos last year. The thinking is that accelerating the shift toward a circular economy requires a public-private partnership strategy at a global level that links with local implementation. It was recognized that while there are some exceptional examples of activities in the private sector and the government sector, they were at an individual project level or individual business level. Nothing has really been done to scale.

So what does that look like in the real world?

As one example, right now we’re working on a project in Nigeria addressing the e-waste problem. A number of multinationals working with a Nigerian ministry want to look at creating a model of funding for a collection and recycling system, a modern recycling infrastructure, so that it can be tested. We want to figure out the financing so it can be replicated throughout Africa, if not elsewhere throughout the globe. Another pending project is looking at Asian coastal countries where there is a leakage of plastics into the ocean. The idea is to both create systems to collect but also offer upstream changes – things like creating recycled material markets by addressing recycled content barriers and then looking at packaging and creating more packaging that can head into recycling.

The theory is you work on the project locally. You help foster the local partnership in local government and with local businesses and even international businesses who are working locally. Then you build into the project methodologies to measure how effective it is. Finally, you would capture those lessons, and utilizing regional and global convenings of government ministers and business leaders, you see how to translate those lessons for adoption in other sectors or other regions.

You have mentioned the need to have the corporate sector involved and you’ve mentioned the need for products to be well-suited for recycling. Do you think extended producer responsibility, in which producers are required to fund collection and processing, is a necessary piece of the circular economy puzzle?

I would separate out extended producer responsibility from design. The reason I do that is because I believe EPR was sold as both direct funding for collection and recovery but also, in doing so, to nudge toward design. But the data globally shows it really has not nudged toward design at all because the way that the charges are placed on manufacturers don’t really distinguish between a good design and a bad design.

But also I think my criticism of EPR is it’s too bureaucratic and too inefficient. The funding going in, not enough of that is going to the direct problem – to collection, to recyclers. We’re working on digital tools to improve those inefficiencies – things like blockchain as a way of automating some of these systems.

Is it possible to bring product and manufacturers more into the process so their offerings are more easily recoverable?

If you want to nudge design, I think that needs to be embedded into the business model. So I believe that creating an incentive-based system on design is a better way of doing it. If you can create a graduated financial inducement that says you get a reduction on your base taxes if you can demonstrate, for example, that you have a certain percentage of recycled content, that’s a way of driving design that is embedded within the base business model.

This may sound like a bizarre example, but one of the few things that Congress did during my time in my former job was pass a food tax credit. … The commercial producers all said the tax credit really had the effect of nudging them forward. It led to an increase of donations going to food banks, and companies began to track their food and realize how much economic loss was happening from their own internal systems. Once you have a financial inducement, the CFOs and the business side of the house gets more involved in the conversation.

When you were at EPA, you helped the agency start putting more of a focus on sustainable materials management (SMM). What exactly is the difference between SMM and circular economy modes of thinking?

I think they are very compatible approaches. When SMM really began, it was about relooking at those materials we used to call waste. The idea was to look on a life cycle-based perspective and make decisions on every step of the life cycle to reduce waste and look not just at manufacturing and post-use. We wanted to look at transportation and so forth. That rigorous methodology of making decisions stands behind SMM. But there was still a focus on the material’s waste side.

So for example, the tractor manufacturer John Deere is now shifting toward re-manufacturing their engine multiple times. They understood through life cycle-based principles you don’t need to throw the whole thing away; you can actually extend the life. Phillips Corp. does a lot of medical equipment, and they are embedding sensors in the equipment to do early intervention when subcomponent parts are failing. They can replace those individual parts before catastrophic failure. Even in reverse logistics, there’s this idea that when a truck goes out, it will bring back something and add value and essentially avoid the emissions associated with double trucking.

Would you say there is also a social component to the circular economy approach?

What’s really important in the discussions is that we don’t lose sight of on-the-ground dynamics. At the end of the day the implementation of these opportunities is dependent on local people and local players – for example, the informal sector, which is really important in many parts of the globe.

Another component is making sure we don’t quickly make decisions for convenience that end up with long term consequences. The local workers, the local community and the folks with the least access traditionally need a clear seat at the decision-making table so they benefit from the circular economy and are a participant in the circular economy process.

This is not just a good-to-do; it’s a must-to-do. And I’m not just saying that from a governance perspective. The solutions on the ground require the people on the ground because they may have knowledge others don’t.

Dan Leif is the managing editor of E-Scrap News and can be contacted at [email protected].