The circular economy was first proposed as a “cradle to cradle” concept at the start of the 1990s. The notion was built on the understanding that resource use and traditional (linear) manufacturing processes were becoming environmentally unsustainable.

In the ensuing years, the concept has been increasingly discussed, and over the last decade, the circular economy has become a significant feature of environmental and economic policy in European governments. It is described as a way for society to increase prosperity while reducing dependence on primary materials.

The European Commission, the governing body of the EU, proposed a wide ranging Circular Economy Package in 2015, and leaders have refined and developed the policy suite to a point where it looks set to be adopted into European law in 2018 through a series of directives and plans.

The package looks to implement circular economy strategies in multiple ways – for example, by restricting certain hazardous substances in products and setting ambitious recycling targets. When it comes to the electronic waste stream, the EU puts a focus on eco-design and extended producer responsibility (EPR).

For electronics recycling stakeholders, Europe’s policy evolution serves as a fascinating case study in how one of the world’s largest economic regions is looking to reframe its approach to waste as a whole. The years and decades to come will also show us whether Europe’s approach can actually lead to meaningful improvements in the recovery of end-of-life electronics – and all other materials – as well as the daunting economic barriers that will need to be confronted. 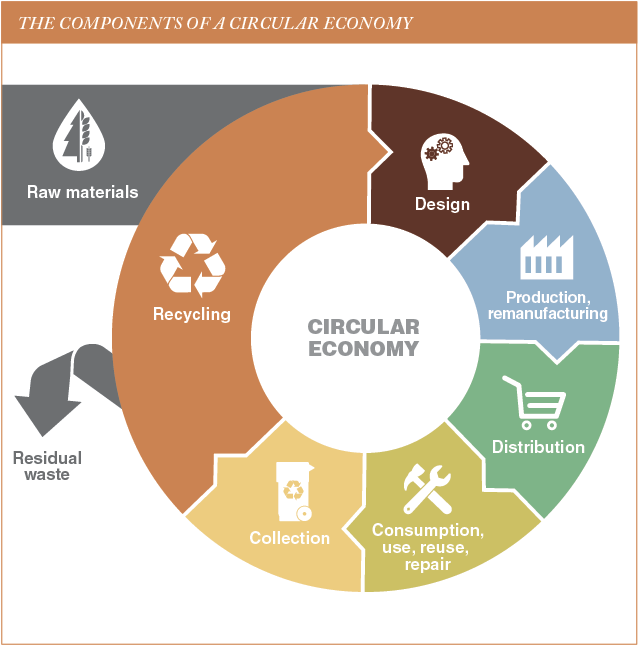 Framed as a major opportunity

EU leaders argue for a transition to a circular economy by laying out some compelling statistics. The European Commission is estimating that waste prevention, eco-design and reuse measures will bring in net savings in the region of 600 billion euros for EU businesses and will also create 2 million jobs by 2030. The Commission projects the steps will grow the EU GDP by 1 percent.

But it’s also important to put those types of projections in context – and to note that some goals laid out in the policies are particularly ambitious. For example, the package is aiming for a recycling rate of 65 to 70 percent on municipal solid waste by 2030, with a separate stipulation that no more than 10 percent of that material go to landfill.

But similar to what’s been seen in the U.S., MSW recovery rates in the EU have plateaued in recent years (see chart on p. 36). It’s ambitious indeed to expect a region that has seen recycling rates hover around 40 percent double its performance in the next dozen years.

The circular economy package also pushes for monumental changes on the way products are designed.

Eco-design and energy labeling in the EU actually originated in the early 2000s with moves to make appliances more energy efficient. Energy efficiency is seen as a key means of delivering greater energy security to Europe and less emitted CO2, with the European Commission estimating that the current policy tools will generate annual emmisions savings of some 320 million metric tons annually by 2020.

The current circular economy package looks to go beyond the existing framework and mandate some characteristics of product design and manufacturing.

Regulations impose requirements that all products contain markings to help identify the different types of component materials used in the manufacturing process.

And the policies also discourage development of products that cannot be easily recycled. One example is a restriction on glueing or welding of components if that makes it virtually impossible to separate two materials cleanly.

Importantly, the eco-design stipulations will apply to all products sold in the EU.

The role of extended producer responsibility

As noted earlier, the EU’s strategy to bring waste electrical and electronic equipment (WEEE) further in line with circular economy principles is to leverage EPR.

In its most basic form, EPR is an extension of product stewardship that requires a producer to be responsible for what happens at the end of a product’s useful life.

Fundamental to EPR is deciding what problem is being tackled and who holds responsibility. Historically, the central aim has been to lessen the environmental harm tied to a specific product, but EPR has also been used to try to correct a deemed market failure or fulfil demand for a certain type of material.

The EU has a variety of longstanding, individually implemented EPR systems covering areas such as packaging, batteries and WEEE – some U.K. legislation, in fact, mentions EPR as far back as 1995. The concept has been embraced by producers, especially those in the electrical appliance sector, and great examples exist – today, we regularly see the use of recycled materials in manufacturing, thanks in part to innovative “products to products” programs.

The current circular economy package brings the principle of EPR further to the fore and is specifically referenced in one of the enabling directives, which includes a “requirement for coverage of the entire net cost of collection, sorting and treatment by producers.”

What is not clear is where the bookends of this responsibility will lie. It remains unknown exactly what the producer will be responsible for funding, who will administer the system and even what the general framework will look like (will it be a competitive market for EPR delivery or a single national system?).

Finding certainty on those points and others is critical. If you don’t have clarity in purpose and structure in EPR, you either unfairly add costs to producers or underfund the system, stifling innovation and creating gray areas of regulation that can be commercially exploited to the detriment of society.

Successful implantation of EPR is further complicated by the realities of integrating recovered material into manufacturing systems in a financially sustainable manner. Margaret Thatcher rightly observed that “you can’t buck the market.” Yet a lot of WEEE stream staples (display screens, fridges and other products) have no net market value when they hit end of life. They require a subsidy to pay for the transport and recycling. 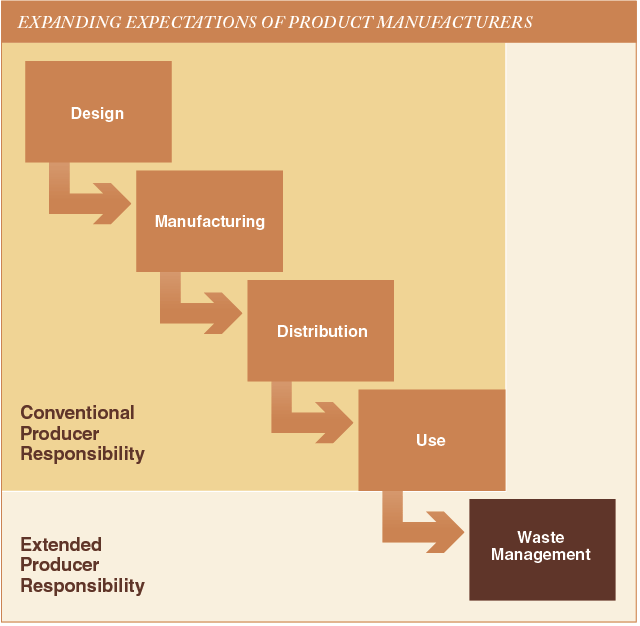 To a large degree, the true costs of handling low-value electronics have been offset by the huge demand for raw materials from China – and India, to a lesser extent – facilitated by the relatively low cost of shipping containers to those destinations.

But this economic model is looking shaky (just look at China’s recent decision to significantly reduce imports of some materials) and simply masks an underlying issue in recycling: Real investment has been lacking in the wider system needed to process collected materials and return them to the manufacturing pipeline.

What the manufacturing sector needs is virgin-equivalent raw materials. To deliver this, we all collectively need to work toward establishing a clear framework that is reliably funded. And in addressing that point, it’s critical that we understand just how significant the barriers are to reaching true circularity for electronics and other products.

For instance, we have to face the fact that virgin resources are relatively cheap and benefit from significant sunk infrastructure investment. That is the linear-focused market that recycling must compete with. With oil at $50-$60 a barrel, economic forces are working against investment for solutions in recovering a product like mixed plastics. If we really want a circular economy for plastics, therefore, we’ll need a subsidy or other funding structure to push more dollars into processing.

If we go further downstream into actual manufacturing, we discover that producers have put their resources into developing mass-production techniques to provide affordable consumer goods. Recycling and reuse activities, however, do not benefit from the same production advantages. End-of-life products are rarely “mass-returned,” meaning the recycling sector never benefits from the same economies of scale.

Finally, we must also add to the mix the constant economic pull of waste disposal, whether that be landfill or incineration. Waste material arises whether there is an end market or not. You get it, you deal with it, and any uncertainty around end markets ultimately leads to the use of disposal options.

Given those realities, how do we move forward?

There’s no doubt that the circular economy concept being ironed out in Europe gives a basic map to help effectively manage resources. And the circular economy package will provide targets, refine regulations and support voluntary initiatives to help member states make the most of the materials they manage. To deliver, however, there are four key areas to be addressed.

First, the move toward a circular economy has to be rooted in market economics, especially around logistics, recycling and re-manufacture. While the EU circular economy package is heavy on legislation, which is important to define outcomes, it is light on market development (or “pull”) initiatives. The right mix of both is needed if Europe is to reduce its reliance on global recyclate export markets. 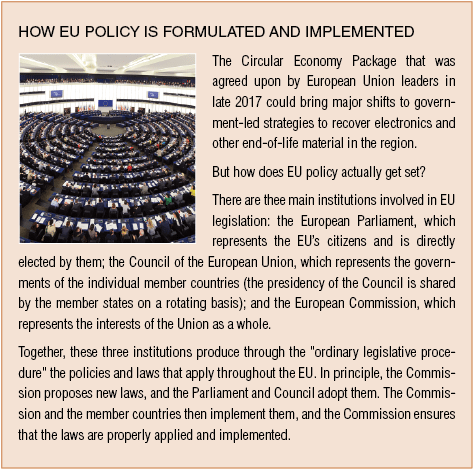 Second, the framework for delivering EPR needs to be thought through; it may need to be different for different products. Key here is to work out who has responsibility and where that responsibility starts and stops, and if commodities are involved, who owns what and in what part of a value or cost chain.

Next is eco-design, an idea that is still in relative infancy and looks to be a tough nut. In today’s world, there is not always a clear connective thread between product design, raw material choice, mass manufacture and ultimate recycling and disposal. Setting certain minimum standards, such as component material labeling, is probably the best we can achieve for now.

Finally, the embedded advantage of sunk infrastructure investment in producing primary commodities is significant. A route must be found that stimulates investment and innovation in recycling and re-manufacturing infrastructure, without heavy reliance on subsidy, low standards and low shipping costs to sell, or even give away, recycled materials.

To be fair, investment has taken place; the European Investment Bank has put up 2.4 billion euros over the last five years, but this needs to be put in context. The European Federation of Waste Management and Environmental Services has estimated that the investment needed to move toward a circular economy between 2014 and 2020 would be 43 billion euros.

There are no doubt other commercial headwinds that have not been dealt with here that will complicate implementation of a circular economy further.

We all know that successfully recovering materials and moving them back to market requires balance on a number of levels. For circular economy and EPR ideas to work, political ambition must not outweigh commercial reality. This really is the key determinant.

And by the way, don’t expect short-term success. It will be a long haul to overturn the linear economy. Those parties pushing for change will need to make sure they are strongly committed to the companies, programs and groups that themselves are taking risks to try to help society realize the goal of a circular economy.

Mark Burrows-Smith is CEO of REPIC, the largest WEEE producer compliance scheme in the U.K. REPIC members represent approximately half by weight of all electrical and electronic products sold in the U.K. every year.