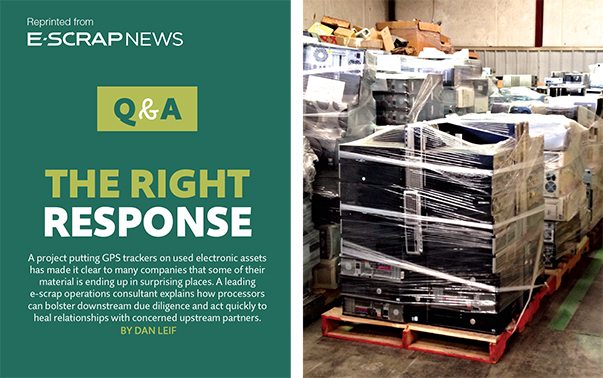 In May of this year, the nonprofit Basel Action Network released the first of several reports detailing an extensive project in which GPS tracking devices were inserted into low-value electronics that were then dropped off at e-scrap collection points around the nation.

The initiative found roughly one-third of the 200 tracked devices were ultimately exported, some to crude processing sites in Hong Kong. The development was covered in a segment on “PBS Newshour” as well as other media outlets.

The Basel Action Network (BAN) project has become a topic of heavy debate within the industry, with some e-scrap executives and researchers questioning the statistical validity of the study and also noting the complex nature of legality when it comes to exporting devices to different parts of the world. But the tracking study has nevertheless caused some of the e-scrap companies named in its pages to move into a period of damage control.

Industry firms – some of them certified to either the e-Stewards or R2 e-scrap environmental, health and safety (EHS) standards – have had to face the fact that their systems or those of their partners have resulted in material being handled in ways that violate certification requirements or protocols set out by original equipment manufacturers and other upstream partners.

“For the folks that have had to deal with this, it’s been a lot of work,” said Kelley Keogh, managing director and co-founder of Greeneye Partners, a consulting company that specializes in helping e-scrap companies and organizations establish systems for managing the movement of material. “A few have had their certificates suspended. Some of have faced excruciatingly large fines. Some have lost clients. It’s not cheap and it could end your business cycle.”

E-Scrap News talked with Keogh to learn more about how a company can efficiently handle the fallout that comes after learning material may not have been properly handled as it moved downstream. She said an effective response comes down to staff training, clear explanations on how issues will be resolved, and always remembering to follow your gut when it comes to the reliability of downstream vendors.

E-Scrap News: Over the last six months, what have you been hearing from your industry clients about the tracking study? How are people responding?

Kelley Keogh: We are working with a few companies whose names showed up on the reports and some whose names didn’t show up but who saw companies mentioned that they had sent material to. We also heard from someone who saw their name in the report and completely denied that it happened and is arguing with e-Stewards [which was founded by BAN] right now about how to fix that. One company called and wanted us to come and testify that when we audited them they were doing the right thing. However, all we can ever say is, “On the day we were at the site, it appeared as though the company was in compliance with their commitments.”

In the case of companies that were surprised to see their names on the report, what exactly happened? Were there any misunderstandings or improper practices that seemed to occur across the sector?

In cases where material got through an auditing chain, one reason we’ve seen is that it was listed wrong. So at the top part of the bill of lading instead of an item being listed as electronic scrap or flat screen TVs, it says, for instance, ABS plastics. Then when you look down on the actual page, it says 22-inch flat screen or something like that. The certification body auditors may not necessarily catch that because they are looking at so much during an audit. In a few cases, the recycler was listing things incorrectly on accident, calling panel glass flat-screen TVs.

In a few cases there was actually a second person within the business that was shipping material out. Employees were doing as they were told. In this case, training became extremely important and focused on reminding employees that only approved vendors could receive shipments. They didn’t know the company had a commitment to a certification that disallowed them to take that action.

So how exactly should a company respond when they find out material has gone to a place that could put the firm in non-compliance in one way or another?

First, utilize your CAPA [Corrective and Preventive Action] system to list out the steps you will take moving forward to manage this risk. Basically, you’re creating a document to show there was a problem and then you lay out the corrective action to keep it from happening again. You’ll present that to the certification body or the OEM or other partner and say, “Look, we screwed up, we know where we screwed up, here’s what we’re doing going forward.”

You cite what you are out of conformance with, whether it is a regulation, commitment or contractual obligation. Then you describe exactly what happened. And you actually describe in steps what you are going to do immediately so there is an immediate fix. Every step includes a date and responsible person for implementing each corrective step. Next, you give details about how you are going to keep it from occurring again. So, for example, you might say, “First we’re going to train the entire staff on where material goes and that only one person is responsible for shipping material out. Before they ship it, it has to be on the approved vendor list, and changes to the approved vendor list can be made only be certain people.” The idea is to have all these checks and balances in place.

It makes sense to re-focus staff training internally. But that still doesn’t solve a huge issue for many industry companies, which is that once the material heads downstream, you really have only so much control over what happens. How can a processor ensure correct movement of material once it leaves the company’s shipping dock?

It’s really about getting what you need from your downstream due diligence reviews of downstream partners: permits, export documentation, bills of lading, final destinations, information on how residuals are dealt with when material can’t be repaired, and so on. When we looked at some of the downstream companies that were receiving things from recyclers named in the tracking report, we noticed some were companies we were already nervous about for one reason or another. One of these companies wouldn’t let our auditors come to audit them whenever we asked, and at the same time our clients told us their pricing was incredible. I told people that if I were going with my gut, I would not be sending them material.

How much of this has to do with commodity prices? If the economics of recycling were better, would companies be less willing to take chances with where they send material?

All of the recyclers will admit that there are limited cost-effective markets for flat-screen televisions. Lots of times there’s an argument between the EHS person and the commodities person within an organization. The commodities person will be saying, “I need to move this stuff because we’re having a tough quarter.” And the EHS person is saying, “I don’t have a good feeling about this vendor that’s not getting me the documents I need.” There is this sort of constant push and pull between sales and compliance. What we always try to help people understand is that one sale to a bad vendor makes you lose lots of sales later on. So it’s probably worth listening to the EHS person. You are protecting your name and the trust of partners.

Do you expect device tracking to continue in the industry?

People are assuming that it is, and I think that’s a good thing. Knowing there is random policing of where material is will make companies more careful about who they are vetting, where the material is ending up and how it is getting there. But I’ll also say we had already been seeing this kind of thing but with RFID. I know companies in the recycling chain that had heard from OEM partners that RFID systems showed a keyboard or something had ended up in China or somewhere it wasn’t supposed to. That has been going on for several years.

The other thing about trackers right now is that they have lithium batteries in them. That makes their presence in shredders extremely dangerous. This is something that needs to be taken seriously. We’ve complained for years that manufacturers aren’t giving us the information we need to be able to manage their equipment safely through end of life and now we are deliberately adding things that normally wouldn’t be in this equipment, to units that may end up in a shredder. I don’t think it’s fair to create a health and safety issue over tracking something. A shredder explosion is dangerous and uncalled for.

The tracking report showed that just because a firm is certified, it’s not necessarily acting perfectly. How is the certification side of the industry dealing with this?

The certifications in our industry are not performance based – they are systems based. They’re saying, “You need to show us you have a system in place to manage your EHS commitments and that this system has a set of checks and balances.” If you make mistakes, you correct them and set up systems to prevent recurrence. There is a constant opportunity for improvement. Those are different than performance-based certifications, where you have to indicate you are actually doing all these things perfectly and to the letter and then you earn the certification. There are pros and cons with each system in my opinion.

It’s been a learning curve for everyone. When our industry created the standards 10 years ago or so, none of us understood the difference between those kinds of audits. I think we’ve realized that people that are certified are not necessarily doing things perfectly, so now what? I think the response has been to set up approaches to catch people not doing it right. Let’s do more training with our auditors and let’s do more training with companies. It’s good timing to do more quality control for certifications.

Kelley Keogh is managing director and co-founder at Greeneye Partners. She can be contacted at [email protected]