It[/ropcap] was a balmy Florida afternoon in the fall of 2018, perfect weather for a ride-along with waste and recycling collection crews.

Team members from Resource Recycling Systems (RRS) were accompanying operators of automated side loaders used by the city of Lakeland, Fla. Drivers described routes, customer behaviors and what would make their jobs easier.

“All of the things that you recycle are on the lid, and it says ‘no bags,’” said Shawn Withrow, a recycling driver for the city. “We leave a notice about the bags, but they just keep bagging their recyclables like they don’t see it.”

These interviews with collection employees marked the beginning of the city’s efforts to rebrand recycling and create curbside behavior change for Lakeland’s residents. The goal was to help the city’s population start new habits and break bad ones.

The process of seeing and hearing firsthand the issues at the curb exemplifies the in-depth approach that Lakeland took to improve recycling.

A focus on research

Lakeland, a city of just over 100,000 people 40 miles east of Tampa, services more than 41,500 single-family households for weekly recycling and solid waste. The city’s residents are passionate about recycling, with an average monthly set-out rate of 77% for recycling.

But research had shown residents struggled with two significant issues: bringing the contamination rate below 20% and distinguishing the local recycling program from the divergent Polk County program (which accepts a more limited list of material). A 2018 material recovery facility (MRF) recycling composition study determined the most concerning contaminants in Lakeland were plastic bags/film, clothing, foam packaging, and yard waste.

After gaining input from internal stakeholders and identifying contaminants, it was time to ask the residents themselves about recycling sentiments. According to a survey of 1,644 Lakeland residents, conducted by RRS and the city, nearly 40% said that they believed Lakeland’s recycling is making a difference. However, the biggest barrier to recycling, as affirmed by 29% of those surveyed, was confusion about what is recyclable.

“Research was critical to us in embarking on this campaign,” said Gene Ginn, Lakeland solid waste and recycling manager. “We knew our residents needed a message that connected our city’s recycling efforts to Lakeland’s branded program.”

The overall objective was to distinguish Lakeland’s recycling program from that of the surrounding county while decreasing the appearance of plastic bags inside recycling carts. The city set three main goals using a strategy called S.M.A.R.T (specific, measurable, attainable, realistic, timely):

Change behavior by decreasing bagged recyclables and wrap in recycling bins. This was measured by having 5% of curbside service customers place a “no plastic bags sticker” on their recycling carts within the first three months of receiving the stickers (details on this initiative are described later in this article).

Improve knowledge of what is recyclable, with 20% of residents surveyed post-campaign recognizing that recyclables should be clean, dry and empty.

It is tempting for programs to begin their outreach by rushing to implement ideas; Lakeland officials knew research and goal-setting needed to come first. Once those steps were taken, it was time to use that input to determine communications tactics (also known as the fun part).

Program leaders were prepared to put resources into the outreach process.

“We wanted a simple message that resonated with our residents,” said Ginn, a 25-year veteran of the solid waste industry. “I’ve seen communities stop short of investing in a consistent and strategic communications campaign to save a few pennies. We thought a little extra time and money were critical for this thing to work.”

The overall communications campaign – including research, planning, implementation and evaluation – cost the city around $1.75 per household.

Lakeland’s recycling campaign was rebranded “Every Blue Cart Makes a Difference” and included a complementary “Bag-Free Recycling” initiative that sought to encourage residents to recycle the correct materials – paper, flattened cardboard and bottles, as well as containers made of plastic, metal and glass – loose in their blue recycling carts to help prevent operational issues in the sorting process. RRS worked with Lakeland’s communications and marketing department to deliver key messages, rebrand the program web page, and conduct outreach via local media, resident communications and social media.

The portion of the outreach effort focused on keeping bags out of carts can be described as community-based social marketing (CBSM). This term was coined by social psychologist Doug McKensie-Mohr and is defined as a process to create social norms for a desired behavior with measurable results by visible commitments.

A colorful letter from Lakeland’s mayor, Bill Mutz, hit 40,000 mailboxes to kick off the bag-free campaign in May of 2020.

“Even my own family had to retrain ourselves to leave recycling loose in our blue cart,” Mayor Mutz wrote. “Now, it is just our routine.”

The mayor’s signature on this letter and candor about his own family’s lessons manifested the city’s top-down commitment to addressing the damage caused by bagged recyclables. The letter created a social norm for residents, inviting them to make a commitment to keep bags out of their carts.

This was coupled with the Spot-the-Sticker contest, which encouraged residents to make a visible commitment not to bag their recyclables by personally placing a sticker on the lid of their recycling cart. Social media posts included a GIF of a hand placing the bag-free commitment sticker on the top of a recycling cart to help highlight the process.

As a measurement tool, Lakeland trained recycling drivers to hit a button in their vehicles every time they saw the sticker on a cart. This generated a report that was also later verified in areas that showed unusually low cart counts.

“It was important for us to engage the drivers from the beginning,” said Ginn. “They know their routes, the customer behavior on the route, and they are part of the solution.” 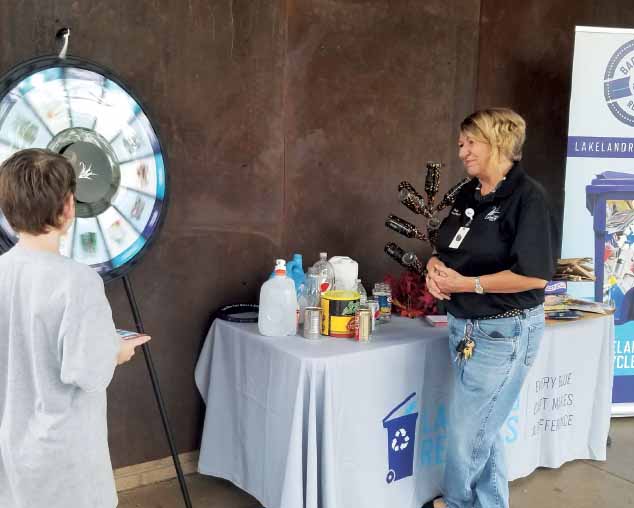 That summer 5,135 residents placed stickers on cart lids. A handful of randomly selected winners received a gift card and reusable recycling collection tote filled with goodies. Adapting to the pandemic restrictions, the recycling department mailed or dropped off more than 930 reusable recycling totes to residents who completed a post-campaign survey or requested a tote on lakelandrecycles.com, the program website.

In wrapping up the campaign, Lakeland conducted a recycling composition study. RRS analyzed and compared data captured before, during and after the launch.

According to a 2020 recycling audit at the city’s servicing MRF, there was a decrease in recycling contamination by more than 6 percentage points as compared with a 2018 audit, which meant the city achieved its reduction goal. Several individual recycling routes boasted a 20-40 percentage point reduction in contamination, with a direct correlation to those addresses that utilized the bag-free stickers.

In addition to measuring the improved quality of recyclables, Lakeland wanted to see if the individual commitment played a role. In the end, the 5,135 households that placed the bag-free sticker on their carts represented more than 12% of residents, exceeding the 5% goal. And the sticker not only served as a reminder; it also normalized the behavior as the stickers popped up throughout the city.

The post-campaign survey, conducted in the summer of 2020, found an average of 89% of Lakeland residents correctly identified that recyclables should be clean, dry and empty, far surpassing the original 20% goal. The survey indicated the campaign mailer was the tool that had informed the most residents, followed by Facebook and the program website.

The campaign reduced processing costs by 50%, the city’s revamped recycling web page saw a 54% increase in page views over the previous year, and customer service reported a 22% decrease in the amount of contamination letters sent to residents.

Finally, a spring 2021 recycling audit saw a consistent 5 percentage point decrease in contamination across the board from a baseline audit.

“It is evident when people are properly informed, they champion what it takes to become a part of the solution,” said Mayor Mutz. “Lakeland citizens have done just that!”

The good work in Lakeland has grabbed regional praise.

The “Every Blue Cart Makes a Difference” campaign was recognized in 2020 by the Public Relations Society of America’s Tampa Bay chapter with the Community Relations Prestige Award and the Best of Show award (tied).

Lakeland realizes the value of ongoing communication with residents and budgets $1 per household annually to reinforce their communications message. The city also continues to work with RRS to revisit the neighborhoods with low sticker participation and is in the process of putting together a targeted campaign to reach these residents with other approaches.