In early June, PreZero started the commissioning process at its plant near Riverside, Calif., running test loads of LDPE and LLDPE recovered film and producing pellets.

In early June, PreZero started the commissioning process at its plant near Riverside, Calif., running test loads of LDPE and LLDPE recovered film and producing pellets, said Scott Melton, president of ACI. The project team was expecting the facility to be operating at full scale by the end of the summer. 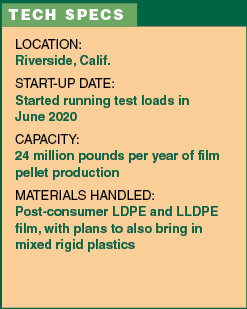 The company is opening a mixed rigids plant in Westminster, S.C. In early summer, all the equipment was in place, and installation was in the final stages.

PreZero was aiming to start making pellets in South Carolina in August at roughly 20% capacity and ramp up from there. At full scale, the facility will process 60 million pounds per year of mixed rigid plastics sourced from materials recovery facilities (MRFs).