Separately, the textiles and apparel industries have announced ambitious recycled-content fiber commitments, further driving demand for RPET. If these industries pursue a collective goal of 25% recycled polyester by 2030, RRS estimates 2.3 billion pounds of RPET will be needed to satisfy that commitment for products sold in the U.S. NAPCOR reported 733 million pounds of RPET was used in fiber production in 2017.

That all means it’s estimated that manufacturers of beverage bottles, textiles and apparel will require at least 3.4 billion pounds of RPET in 2030 (not accounting for sales growth). This is in addition to existing RPET demand for applications such as carpet, strapping, film, sheet, and non-food bottles.

Our current reliance on use of PET bottles for making RPET is not sufficient to meet this demand. To get that much RPET from bottles alone, we would have to recover nearly every bottle sold in the U.S. While this points to an opportunity to increase bottle recovery, it also suggests that other sources of RPET will be needed to fill the gap.

Textiles represent an alternative waste stream from which to source RPET. According to RRS calculations, 13.4 billion pounds of polyester textiles were landfilled or incinerated in the U.S. in 2017. If this waste stream could be leveraged as a raw material, we would have abundant supply for estimated demand.

Accessing the polyester in waste textiles will not be easy. It requires significant investments in collection infrastructure, sorting and advanced recycling technologies, but such investments would help companies meet their goals and move the textiles industry toward circularity. 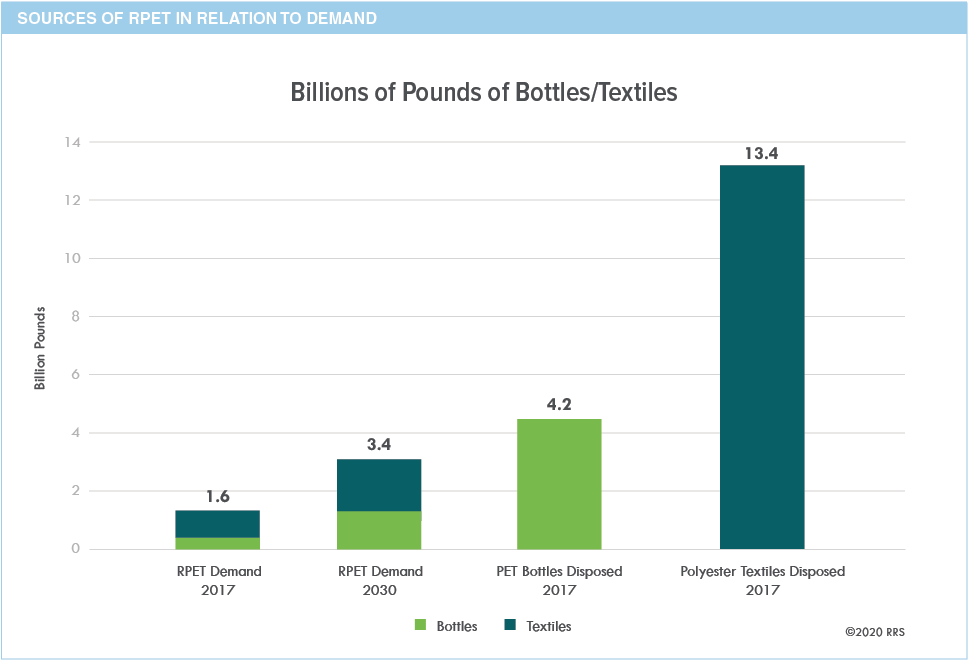