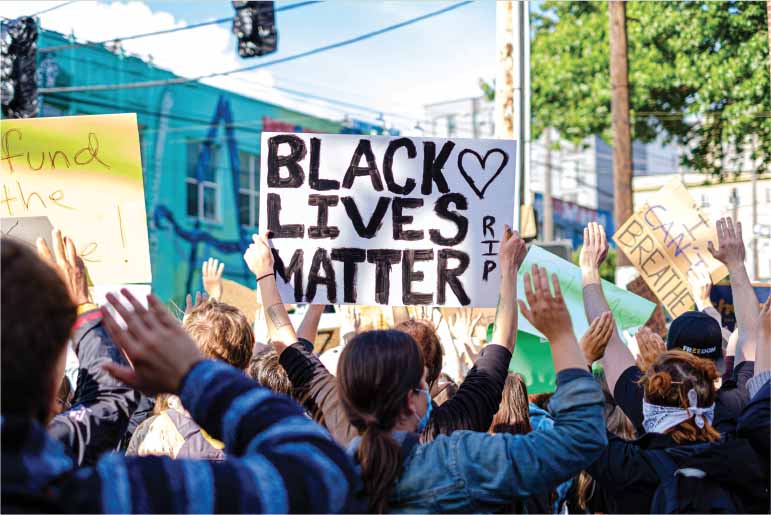 In the days and weeks following George Floyd’s death, the Black cries against injustice were joined by voices from the rest of society in a way not seen in decades.

And I’ve been able to see with my own eyes the way racism continues to hold down Black America: Another racially charged shooting in the news. Another statistic showing the disproportionate number of Black people in U.S. prisons. Another gathering of business leaders with very few Black faces in the crowd.

I also have the convenient option of putting discrimination against Black people – both the shocking and subtle manifestations – into an ever-widening folder in a file cabinet in the back of my mind. These are important things that I know cannot simply be disregarded. But, ultimately, I have always been able to close the file cabinet door, leaving the actual reckoning for a later time.

Amid the social unrest in our country following the killing of George Floyd in Minneapolis, I found I still had that option. I could learn the details, attend an event or two, make a donation, and then go back to my day-to-day world of relative safety and comfort.

For the country’s Black population, of course, the choice of distancing oneself does not exist.

The George Floyd killing is another episode illustrating how Black individuals are always a step away from violence, many times at the hands of the police officers we pay to protect us.

In the days and weeks following Floyd’s death, the Black cries against injustice were joined by voices from the rest of society in a way not seen in decades.

“It is clearly a rainbow that is outraged at what is happening in the United States,” U.S. Rep. Karen Bass, D-Calif., told NPR’s “Morning Edition” on June 8. Bass, chair of the Congressional Black Caucus, was at that point working to advance new legislation to reshape American police departments.

How do leaders in North American recycling help ensure the current momentum for justice continues far into the future? One key is to realize and activate the power we all have in our individual roles.

To help actually undo racist holds on society, we need to know where and how that is happening. A remarkable assortment of articles, books, documentaries, podcasts, lectures and more is available to help us educate ourselves on the topic. Our free time is limited and having space to decompress is essential, but finding 30 minutes to an hour here or there to open up to the stories, histories and perspectives on Black persecution can do much to keep you engaged.

In the world of materials recovery, minority populations tend to make up much of the workforce involved in activities such as collection and manual sortation – these are jobs that have relatively low wages but higher health risks. Meanwhile, owners and managers tend to be white. It’s time we talked about this disparity more openly and developed pathways for more people of color to move into industry leadership roles.

This is the time to look clearly at the Black discrimination that is inherent in American life, and to take action in whatever way we can, starting with ourselves and moving outward through our companies and communities.

Dan Leif is the managing editor of Resource Recycling and can be contacted at [email protected] The opinions outlined in this article are the views of the author and do not necessarily represent Resource Recycling, Inc.