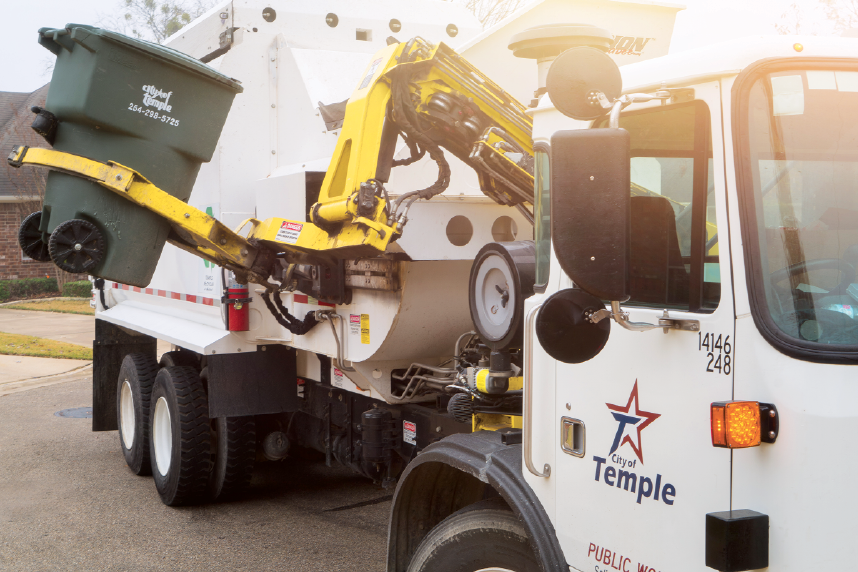 Temple, which is located about 70 miles northwest of Austin in central Texas, first explored curbside recycling in 1998.

The community of Temple, Texas sees high participation in its weekly curbside program, which has evolved from a small collection effort in one neighborhood to a citywide single-stream service that also helps neighboring communities move their recyclables.

Like many cities, Temple’s recycling program was recently impacted by the coronavirus pandemic, leading to a pause in diversion and a focus on boosting safety within the city’s recycling center. After a short suspension, the center reopened and material is once again being diverted from disposal.

“The city’s curbside recycling program is a service we are proud to provide for residents,” Public Works Director Don Bond said in a May 8 announcement about the program’s restart. “We are happy we were able to find a way to resume this service while still maintaining proper safety precautions.”

A city official provided more details about the program’s history and current progress in an interview.

Temple, which is located about 70 miles northwest of Austin in central Texas, first explored curbside recycling in 1998. Initially, the program serviced 500 homes in the Western Hills area of the city. Although “the results were favorable,” the program didn’t progress further at the time, said Justin Brantley, director of solid waste services for the city of Temple. 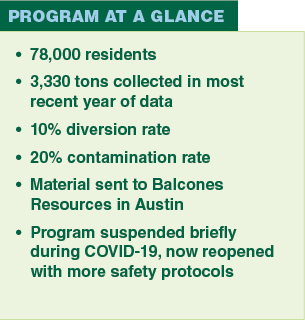 In 2011, the city revisited recycling, beginning a phased-in curbside service approach after a survey of residents showed there was strong interest. The service was expanded in subsequent years, until citywide collection was available beginning in 2014.

All city residents were delivered a 96-gallon green recycling cart to participate in the program. Participation is relatively high, with the city estimating that between 65% and 70% of households set their recycling carts out on the curb each week.

The program is set up as a weekly single-stream collection service operated by the municipal government and funded by monthly service fees. City crews with the Public Works Solid Waste Department collect recyclables and bring them to a local facility leased by the city.

Recyclables accumulate at the city facility and are loaded onto a walking floor trailer. Every day, the city transports these loads of recyclables to Austin for sorting and processing at the Balcones Resources MRF.

The Temple transfer station facility also allows neighboring communities to deliver their recyclables, serving as a regional hub for material to be aggregated and sent to Balcones. The facility receives material from the cities of Belton, Killeen, Salado and Troy.

Temple collects common recyclables, including paper, OCC, UBCs, PET and HDPE containers and more. The curbside program does not accept glass, but the city has drop-off recycling options for that and other non-curbside materials.

The Temple program has a goal to improve resident education about proper recycling, and has created new educational materials and leveraged speaking opportunities in the community. Temple uses a cart-tagging system to inform residents about contamination problems in their carts, but it is looking to expand outreach to further reduce contamination.

The city currently sees a contamination rate of roughly 20%, comparable to many cities nationwide. Still, “most operations would like to see their rate at 10% or below,” Brantley said.

The city is also looking to tackle additional recycling generation sectors, specifically improving diversion from the multi-family and commercial generators in the city. Currently, the city has about 170 commercial recycling customers that generate OCC.

When the COVID-19 pandemic hit this spring, the city was able to continue servicing curbside customers with weekly collection, but the facility where material is aggregated temporarily stopped operating.

As a result, beginning on March 19, material collected through the recycling stream was sent to the landfill.

Two months later, on May 18, the city resumed regular recycling operations. During the downtime, the facility came up with new safety procedures and procured additional personal protective equipment.

“Employees will be provided with respirators, gloves and will be trained on proper social distancing,” the city wrote in announcing the resumption. “Additional ventilation and a hand-washing sink will be installed at the facility.”

During the recycling pause, the city continued to offer a drop-off recycling option for residents.