“Improperly packaged lithium batteries present a significant risk of a serious incident and the release of stored energy,” Neal Suchak, part of the organization’s Hazmat Safety Assistance Team, said during his presentation on the webinar, which was held Jan. 23. “Thermal runaway can lead to self-heating and the release of that stored energy, and the result is fire, explosion and a release of flammable gases.”

Lithium-ion batteries use watt-hour measurements to classify battery energy storage levels (often corresponding with size), which is an important factor in regulatory compliance; in general, the larger the battery, the more regulations apply. For instance, batteries of at least 300 or more watt-hours can only be shipped by ground. Typically, batteries found in consumer electronics that recycling firms will encounter fall into smaller battery categories. 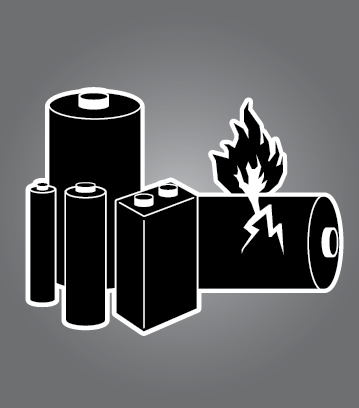 The lithium battery handling mark should be applied to the outer packaging when shipping recovered lithium-ion units.

For small lithium-ion batteries found in consumer electronics, the proper packaging generally includes, at minimum, both inner and outer packaging. Inner packaging must be non-metallic, must completely enclose the battery and its terminals, and must separate batteries from contact with any conductive material. If batteries are not separated from each other, their terminals can touch and cause a short circuit and possible fire.

The lithium battery handling mark is a standard icon that must be applied to packages of lithium batteries. The mark shows multiple lithium-ion batteries, including one with a crack and flame coming out of it (see image above).

Under the icon, two numbers must be included: the United Nations numbers that identify battery chemistries and whether batteries have been removed from equipment, and a telephone number for somebody who can provide basic information about the shipment, including where it came from and how many batteries are contained. The phone number doesn’t have to be monitored 24 hours a day.