Q&A: Half a century of viability

Most recycling operations make a point to connect to Earth Day.

But for Earthworm Recycling, a nonprofit enterprise in Somerville, Mass. that provides business-recycling services, the annual event has special meaning. Earthworm was formed on the first Earth Day (in 1970), meaning that April 22, 2020 will mark the operation’s 50th anniversary.

To learn more about how the group has survived a half century in a sector known for fluctuation and consolidation, Resource Recycling caught up with Jeff Coyne, who is Earthworm’s executive director and has been with the group since 1983. He discussed the unique business niche Earthworm fills as well the group’s “hippie past,” recycled paper markets, the importance of not relying on commodity revenues alone and much more.

Resource Recycling: What exactly is the scope of Earthworm Recycling today?

Jeff Coyne: We have 4,000 square feet here in Somerville. About half of that is warehouse we use to sort and store e-scrap. We’re a small staff, with seven of us total. We have two 22-foot box trucks that go out and collect from about 700 customers in the greater Boston area. Of those 700 customers, the bulk are smaller offices – our typical customer has around 25 employees or less. They’re usually generating mixed paper and cardboard, with the occasional e-waste. All the paper, cardboard, bottles and cans we collect go to a nearby MRF. The e-waste comes back to our warehouse. In terms of collection infrastructure, we have 35-gallon barrels and 18-bushel hampers we loan out. Almost all of our collection equipment is indoors, where we go into offices. We do offer curbside pickup, but we see ourselves as a service. We have a lot of contact with customers, so people see our drivers. That’s a big part of who we are.

So it sounds like you mostly use a fee-for-service model?

Right. It’s all fee for service. The business model is built around a fee that’s charged to pick up. If there’s residual scrap value, that’s great, but we don’t depend on that. If the market fizzles out for cardboard, which is zero value to us right now, it doesn’t matter that much because we’ve made our money on the pick-up fee. I think that’s part of what has enabled us to last for so long in this unpredictable market.

What do you focus on to thrive serving small-business customers?

Part of it is a willingness to do the hard work of serving an underserved market. Small businesses are a low-value niche and there’s relatively little competition. We’re a little bit like those nimble mammals, eating crumbs at the feet of the dinosaurs.

Why is competition limited in that space?

It’s really inefficient, so it’s not surprising it’s underserved by the private sector. You have small amounts of low-value material in places that are difficult to get at. As a nonprofit, we’re sort of mission based and the mission is the underserved sector, so that’s where we go. There’s no need to duplicate the private sector – they do what they do well, and we go where they’re not. It’s also true that we don’t see that much tonnage anymore. Offices just don’t generate paper like they used to. We see a lot of paperboard packaging and cardboard, so it’s probably accurate to say there’s volume left there on the table but not much tonnage. 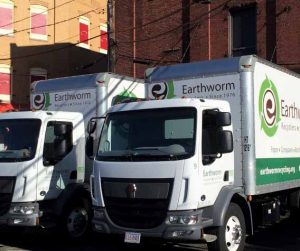 How has that shift in the materials stream impacted you?

The revenue impact is significant. If you were to graph our paper tonnage over, say, the last 10 years, the graph would look like a nosedive. Tonnage is down. But cardboard is way up. Cardboard has a lot of volume, and we make money by charging customers to pick it up. So the more they have, the more we make. We charge by the hamper, so the more inefficient they are, the more money we make. We make money on their lack of desire to spend any company time efficiently packing the equipment.

At the same time, you are trying to maintain strong relationships with these folks and you also need to do education on contamination, right?

It’s a delicate dance. They don’t have to do this. They can throw their cardboard away. It’s not a rule here. For the most part, they’re hiring us because they want to, because they think it’s the right thing. Still, there’s a price point above which they won’t go, so it’s a matter of finding that spot where it’s affordable for us to come out and collect and it’s a price they’re willing to spend. But again, we think of it as a service, and we want them to be happy spending their money on the service. The big things are being reliable and friendly and having the recycling not be something that is a drudgery to them – that it’s just a habit they can do relatively affordably.

Tell me a little more about the collection process.

We’re one of the few recyclers that operates box trucks; almost everyone uses packer trucks. But in the back of our truck we have four main streams of materials that we keep separate: sorted office paper, cardboard, bottles and cans, and e-waste. You can’t do that in a packer truck. There’s some efficiency in collecting all those things all at once from the same customer and not having separate trucks collecting separate materials, so that’s worked for us. But at the same time, we’re pretty aware that what we do is not really re-produceable in a lot of places. What we do can only happen in a large metro area where you have enough density of potential accounts so that your roots are fairly tight. We’re collecting low- or no-value items with an affordable pick-up fee. You can’t travel too far to do that.

Even though you’ve always used fees to cover the cost of collection, has the swing in paper prices over the last two years caused you to go to customers and tell them you need to charge them more?

We try not to change our prices too often. We did raise our prices a couple percent two years ago, and it’s in our plans to raise them again next year. So we raise prices at three- or four-year intervals. We are feeling it. Almost all of our costs are going up so we do need to revisit pricing. I think we’re at a bit of a sweet spot right now. Customers are willing to spend the money to have us come out. 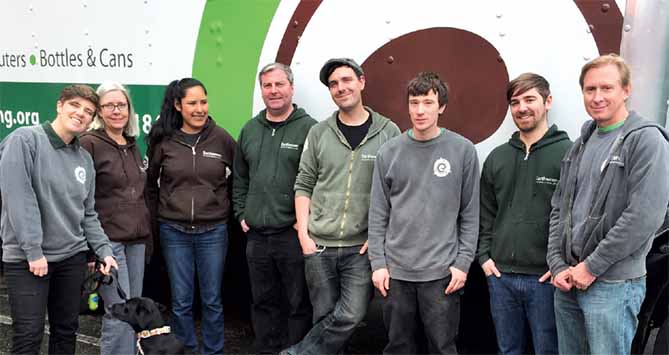 Jeff Coyne (far right) with the staff of Earthworm Recycling. All members of the team split their time between the office and collection work in the field.

What are some of those costs that have gone up?

Payroll and insurance. Those are our two biggest expenses. After that it’s the rent, and then after that it’s equipment maintenance and repair. We have to pay reasonably decent wages, especially with low unemployment rates right now.

You yourself have been in the business since the early 1980s so have seen plenty of market shifts. What is your general perspective about where things might go from here in terms of pricing for recovered materials?

The view from the trenches isn’t very far, and I don’t know the future. But I guess I’m always hopeful for a reprise of the ’90s boom years that followed the glut of 1990, when industry invested in capacity to soak up the glut. I’m always hopeful that will happen now, but really prices haven’t come all the way back from the last recession. I’d be surprised if markets for things like high-grade paper ever come back. There just doesn’t seem to be the demand for that product. Everything seems to be paperboard and packaging. I don’t really know where markets are going to go. But I’m hopeful there will be an investment in the large amount of low-value material that’s currently out there.

I think it’s interesting Earthworm is also in the electronics recycling space. How did that part of your business develop?

There’s interest on the part of the businesses we serve in wanting to see their e-waste recycled and, even more so, they want to see it get reused. E-waste is also something that motivates our staff and keeps things interesting for them. I think that if you look at the amount of money we pay in rent for our warehouse compared to the income, it probably doesn’t justify it. But it’s important because it’s what our customers get excited about, and it’s what our staff gets excited about.

In what ways does e-scrap engage the staff?

Some of what comes in is perfectly useful and working, and I think we get energy out of finding a home for that. For example, our entire office is outfitted with used hardware from the e-waste warehouse. And then there are people that come in each week and go through the stuff and look for hardware they can donate to nonprofits. We get a lot of good feeling about the stuff getting reused. It’s important to note, though, we aim to collect all types of e-scrap, not just the good stuff. We use the higher value items to help subsidize the recycling of the lower value items, like printers, copiers and fax machines. This pulls down the profitability of the operation, but as an environmental group, we feel it is important.

Earthworm is structured as a cooperative. What does that look like and how does it work?

The cooperative management is kind of an echo from our hippie past. There are stories from staff meetings long ago where the whole staff was deciding whether to get blue-ink pens or black-ink pens. The way it looks now is that staff have a voice within the organization. People have spheres of responsibility, so there isn’t everybody making a decision on everything, but everyone does have a voice. And that voice comes out in the staff meetings we have. People like that, they like having a say. I guess the other holdover from the co-op days is everyone gets dirty here. Everyone has some time in the office, and some time on the truck. I think everyone likes to have a diverse job, with a physical component and a mental component. That’s our strength, but also our weakness. It’s what makes this a nice place to work. But sometimes having everyone doing a little bit of everything limits our efficiency.

What’s the plan to keep your operation moving forward for another 50 years?

We get satisfaction from serving small businesses, and I think we do a good job using market forces to provide a service. We’re also very proud of being self-funded – we are a nonprofit but we don’t get grants. As I said, e-waste is a thing that also stimulates the staff, so we’ll continue to go in that direction. At the end of the day, we get a lot of energy out of our customers who are excited to see us come, and they get energy out of it too. As an organization we take pride in knowing that we are leaving a lasting legacy via the over 100 former staff who are now practical idealists and who are out in the world still making a difference.