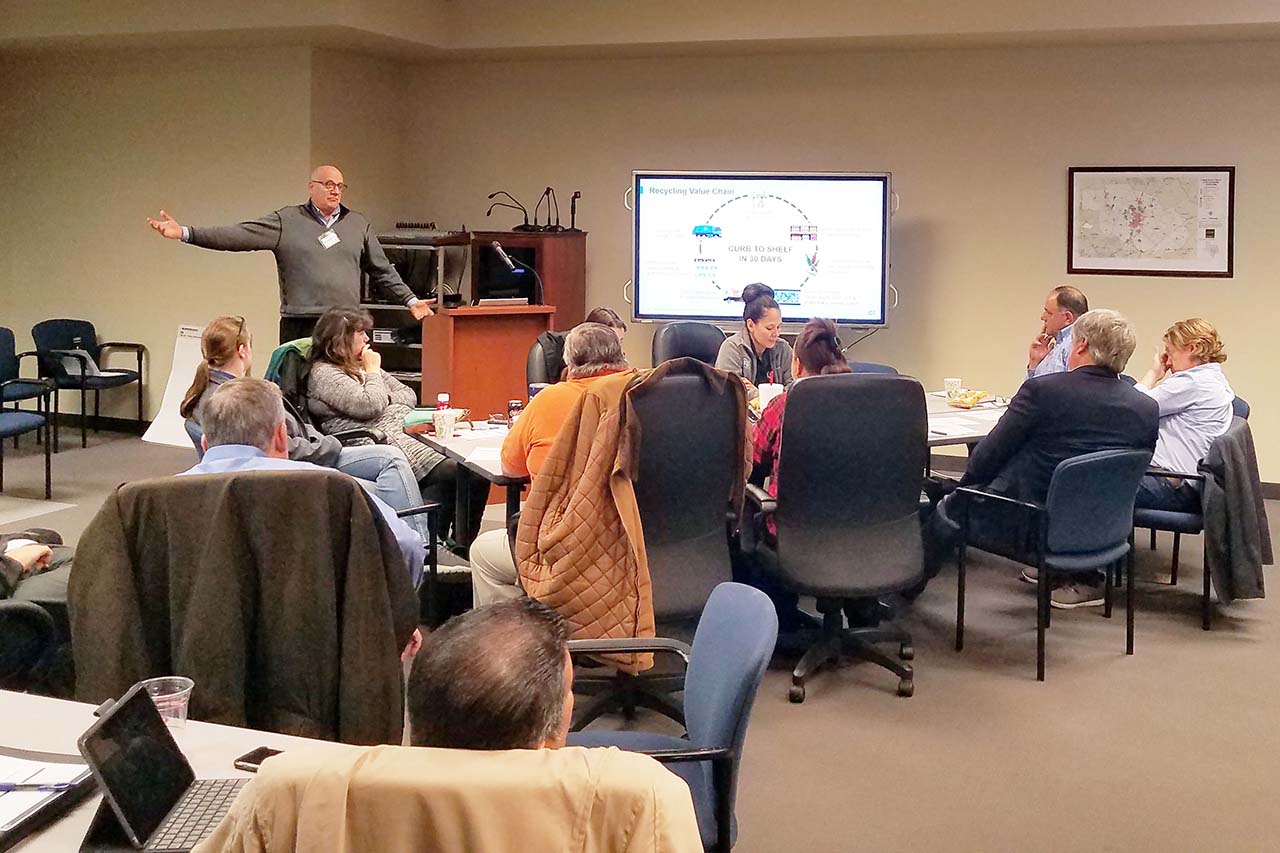 In the spirit of America Recycles Week (headed by the U.S. EPA), the State of Texas Alliance for Recycling (STAR) hosted a workshop on Nov. 13, 2019, to dig into the current challenges, looming barriers and potential solutions for increasing end-markets and the circulation of glass in Texas. The sold-out Texas Glass Recycling Workshop was a great success, resulting in a day full of important conversations among a variety of stakeholders about where Texas currently stands with glass recycling.

Glass Recycling Coalition (GRC) representative and O-I Vice President of Global Sustainability Jim Nordmeyer and I welcomed a crowd of 50 participants to the event, which was coordinated in Austin by STAR and the GRC. The workshop, sponsored by Strategic Materials, utilized Poll Everywhere, a live polling and interactive program, to engage attendees during two breakout sessions. EPA Region 6 provided the breakout session worksheets for attendees. The workshop truly brought forth the collaborative nature of the recycling industry.

A highlight of the day was when Laura Henneman, GRC representative and vice president of marketing and communications for Strategic Materials, along with Nordmeyer, presented Balcones Resources with the industry’s first MRF Glass Certification. The free certification program recognizes MRFs that have additional equipment and operational procedures for cleaning up glass in both single- and dual-stream systems, which thereby produce more marketable and higher-quality glass. By achieving this certification, Balcones Resources is gaining a competitive advantage in the recycled glass marketplace. 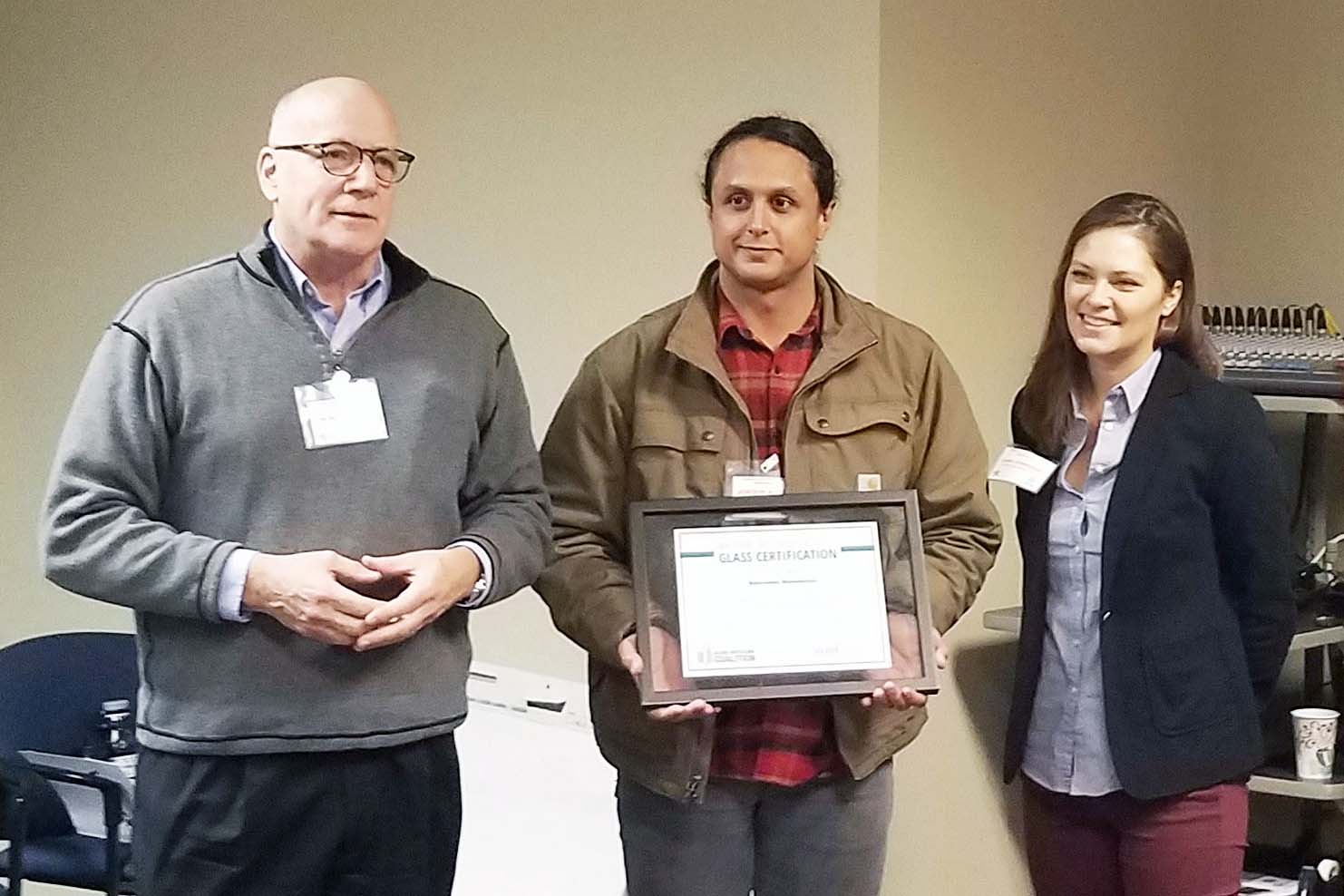 Throughout the day, top-notch presentations were given by representatives from O-I, Strategic Materials, FCC Environmental Services, Independent Texas Recyclers, Pratt Industries, Conscious Containers and End of Waste Foundation. The interactive session opened with an ice-breaker activity that asked attendees to describe the current state of glass recycling in Texas. Their responses revealed a colorful array of descriptions, but the terms used most were, “challenging,” “inconsistent” and “limited.”

STAR provided participants with useful data points from the 2015 Economic Impact of Recycling in Texas study, such as the number of recycling jobs, processors, and MRFs in Texas. The study also revealed that the economic value of recovering just 60% of the 657,577 tons of glass landfilled in Texas annually would result in adding $25,645,490 to the Texas economy.

Attendees got a chance to work together during two breakout sessions over the course of the day: one that focused on barriers to glass recycling, and the other collaborating to identify solutions for glass recycling in Texas. Many useful ideas were generated that will help STAR advance glass recycling and reuse in Texas.

In the morning session, participants were asked to list what they feel are barriers to glass recycling in Texas. The responses showed that there are multiple issues, including a “lack of financial incentives, education, value and economics,” but most responses relayed that the greatest barrier was the “quality” of the material.

Another polling of the audience sought opinions on who in the supply chain they feel is responsible for the overall quality of recycled glass in Texas. The response was mixed, with 29% of attendees responding that manufacturers are responsible, 7% saying it is the MRFs, 11% stating it is the responsibility of the municipality and commercial sectors, and 52% stating that it is a combined effort.

The final poll of the workshop asked participants what they feel are the biggest opportunities for glass recycling in Texas. The poll revealed that “municipal education” was at the top of the list, which also included a wealth of suggestions such as “landfill tax,” “infrastructure,” “refillable bottles,” “circular economy” and “STAR.” 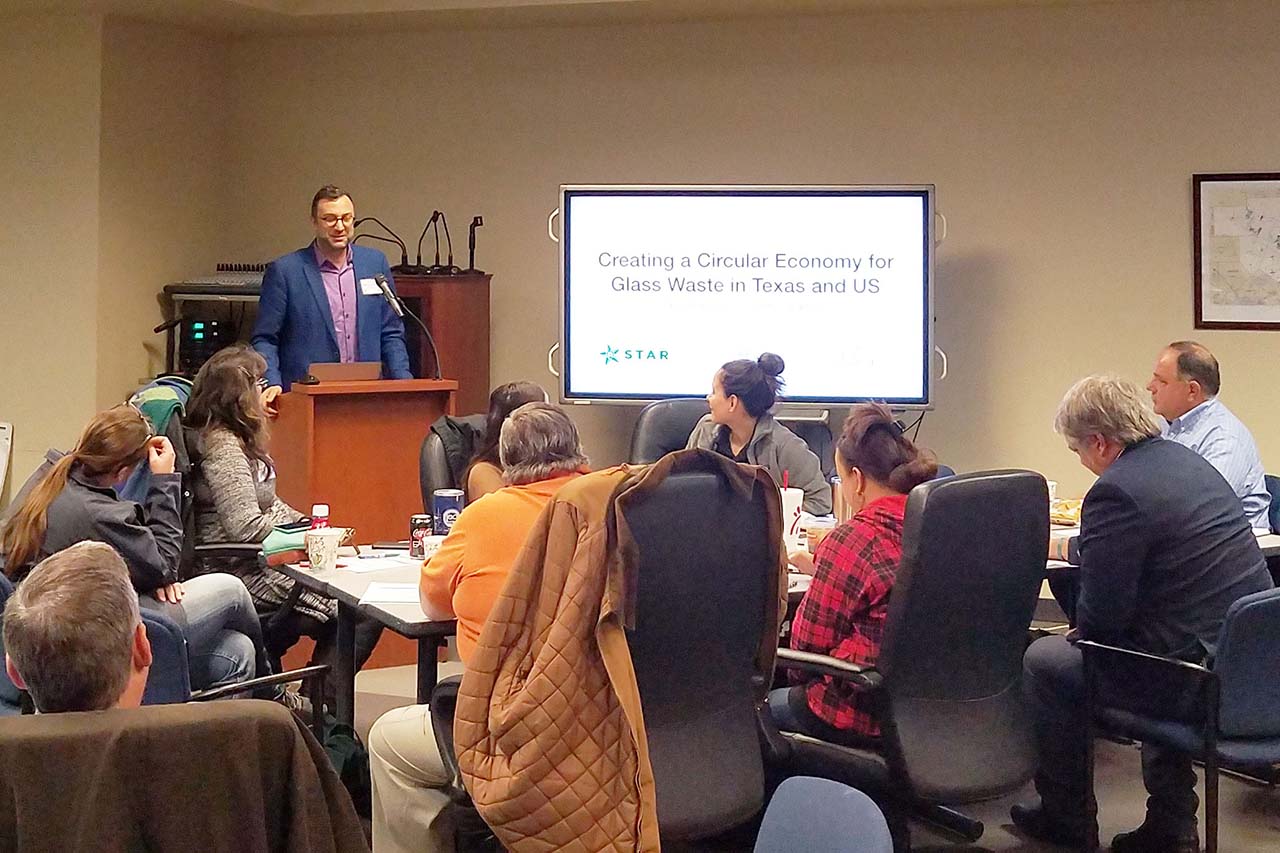 Capping off this amazing event was a presentation by End of Waste Foundation (EOW) founder Ionut Georgescu, who explained his company’s use of blockchain technology to track quantities of glass through each stage of the recycling process, thereby creating powerful marketing opportunities and a truly circular economy. EOW put out a call offering all Texas MRFs, manufacturers, local governments and haulers a no-cost pilot program to help advance glass recycling in Texas.

STAR’s mission is to advance recycling through partnerships, education and advocacy for the benefit of Texas. By hosting workshops that bring together multiple stakeholders, STAR is proud to be helping generate conversations and gather the data and people needed to advance material circulation here and beyond Texas.

Jordan Fengel is executive director of the State of Texas Alliance for Recycling (STAR).