In the current era of recycling markets, it’s become clear that generating cleaner material will be a major way that local programs, processors and others can remain sustainable.

But while many cities and companies are taking steps to limit recycling contamination on their own, the industry should not forget that some of the most meaningful gains in education come when messaging from multiple actors is coordinated.

In the fall of 2019, the North Carolina Department of Environmental Quality’s Recycling and Materials Management Section (RMMS) ran a 10-week anti-contamination campaign that had consistency and cross-jurisdiction planning at its core.

The “Recycle Right NC” campaign was built around free outreach toolkits for local governments to customize and distribute to their residents. The direct mail materials, press releases, and social media posts were used by 225 local governments and colleges across North Carolina, and design and planning allowed those various entities to all inform their audiences in a highly coordinated way.

What’s more, because work was done to tie the broader campaign to the specific materials accepted by processors in different areas, local outreach effectively encouraged residents to recycle in a way that was right in line with the capabilities of the MRFs receiving that material.

In the end, this recycling education effort led to surprising levels of resident engagement and set the stage for North Carolina municipalities to take even more steps to strengthen materials recovery and waste reduction.

First, communities and materials recovery facilities (MRFs) sought to decrease the processing costs associated with single-stream recycling, and recyclers pointed to contamination reduction as perhaps the most immediate way to cut costs. Contamination had been an under-addressed problem in the region since the inception of single-stream recycling, with some communities seeing contamination rates over 20%. If communities could remove contaminants from the loads sent to MRFs, costs would decrease both for processing recyclables and for disposing residue.

Second, National Sword shined a spotlight on recycling at an unprecedented level. Major media outlets started writing recycling stories, many of which were negative or misinformed.

North Carolina RMMS designed the “Recycle Right NC” campaign as a direct response to these two changes. RMMS started with the assumption that with clear, simple, and uniform recycling outreach materials, local governments could reduce residents’ confusion over what belongs in their cart. Furthermore, RMMS wanted to set the record straight about what happens to residents’ recyclables once collected.

At the same time, RMMS designed the campaign to offer local governments an inexpensive method to progress their programs during this critical juncture for the industry.

An important step at the start of the process was aligning messaging with processing realities on the ground. RMMS staff worked with all 18 MRFs that serve the state to determine each MRF’s accepted material list. Since every region of the state uses one or two local MRFs in the area, RMMS outlined these regions as “MRF-sheds.”

Just as water from creeks, streams and rivers are channeled into a watershed, recyclables in a given region are channeled into a MRF-shed. All the communities in these regions should be recycling the same material since they are using the same recycling processors. Staff reasoned that if messaging was consistent across MRF-sheds, then residents would be less likely to be confused about recycling. Although each local government can determine how to provide recycling outreach to its citizens, the state encourages them to partner with their neighboring communities to share a clear and consistent message.

Through a survey of all 652 counties and municipalities in the state, North Carolina staff determined which communities used which MRFs, creating the boundaries of the MRF-sheds. Using GIS tools, RMMS created a statewide map of all the MRF-sheds, color-coding it by materials accepted by facilities in a given area. RMMS then created templates for brochures, postcards, print ads and “oops” tags based on the individual MRFs’ accepted-materials lists. The graphic design team created 18 different sets of outreach material with each set branded and corresponding to a different MRF-shed. RMMS could further customize these materials based on the branding needs of each community that requested assistance.

All these efforts to create new content cost RMMS little more than staff time. The new graphics, the MRF-shed map, and the campaign organization were completed in-house.

In August 2019, RMMS hosted a series of information sessions throughout the state in partnership with the Carolina Recycling Association. At these events, RMMS showcased the free outreach materials that had been developed for each of the MRF-sheds. More than 150 local government representatives attended these meetings to preview the “Recycle Right NC” campaign and learn how their governments could utilize the outreach materials to better educate their residents and reduce contamination.

Leading up to these events, RMMS promoted buy-in by distributing a pledge that community representatives could take to confirm they would be involved throughout the campaign. More than 200 local governments signed up to participate in at least one facet of the campaign. The objective was to coordinate social media posts and press releases by all the participating communities to maximize the impact. If each local government posted the same graphics and information on social media simultaneously, the campaign would have a clear and consistent message to residents.

During the 10-week coordinated campaign, RMMS posted daily social media posts and encouraged local participants to share these with their local followers.

RMMS also provided grant funding to help offset the cost of outreach materials. Since the graphics were provided by the state, communities could apply to use grant funds to pay for printing and mailing brochures, cart tags, and postcards for their residents. RMMS encouraged grantees to use the same types of messaging throughout their entire MRF-shed.

In late August, each participating community received a MRF-shed-specific campaign packet including press releases, accepted-materials flyers, sample letters to the editor, and social media posts. RMMS encouraged local governments to promote the campaign from multiple sources to maximize the amount of people reached. The objective was to create easily usable templates of recycling education that any local government could use, regardless of whether they had designated recycling educators.

Over 70 orders from local governments came to the graphic design team for outreach material customization. This plug-and-play model allowed smaller governments with no education budget to distribute ready-made materials. 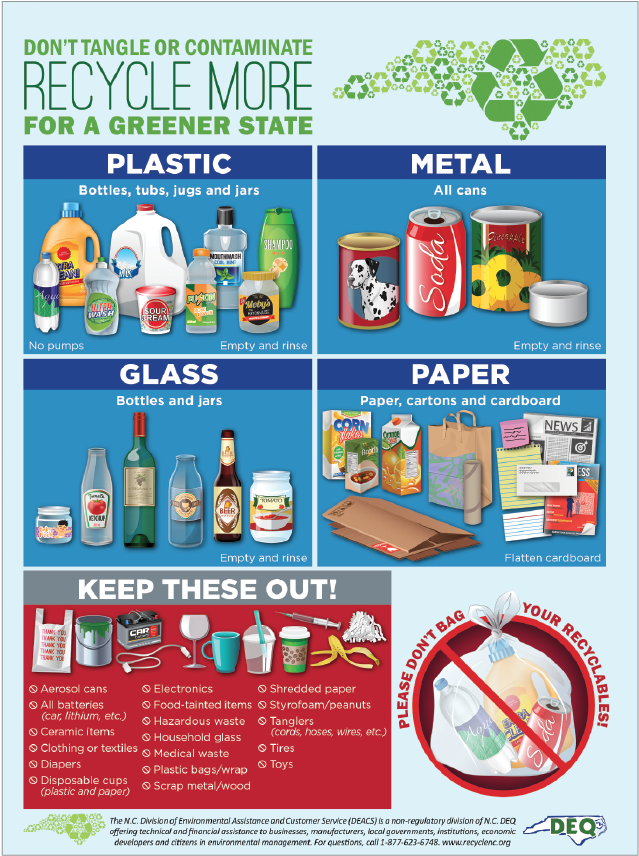 When the “Recycle Right NC” campaign officially launched on Sept. 9, 2019, the social media response from residents was prodigious.

RMMS staff had scheduled four social media posts each week, Monday through Thursday, and local government social media managers shared the posts directly from the RMMS Facebook, Twitter and Instagram accounts. The second post of the campaign informed residents they should not bag their recyclables in plastic bags, and this post received over 80,000 views on Facebook and hundreds of comments.

As the social media posts gained more attention, RMMS staff took half-day shifts to answer the questions from curious residents in the comment sections of posts. For instance, many people expressed surprise that plastic bags were not accepted in their recycling carts, and others asked if there were alternatives to throwing bags away. RMMS staff would offer advice on plastic bag take-back programs or strategies to reduce plastic bag use at the grocery store. A typical post would have a few dozen questions, and some of the more popular posts (such as the “Don’t Bag Your Recyclables” message) received hundreds of comments.

In 2020, RMMS will target specific communities that could use free outreach and recycling education. Seventy local governments requested customized signage and brochures during the campaign. With the information learned from the social media comments, RMMS plans to offer support to the next 70 communities to assist their contamination reduction.

The campaign promises to spread in other ways in the coming months. The social media posts allowed residents to give direct feedback to RMMS and their local government about what concerns they had about recycling. Commenters asked for strategies to go beyond recycling as a waste reduction strategy, so RMMS is designing new outreach materials to educate about at-home composting and reducing, reusing and repairing.

Additionally, universities and colleges across the state have expressed interest in adopting the education materials, and University of North Carolina, Chapel Hill was the first to do so. Local governments across the state are gathering as MRF-sheds and educating more cohesively. Finally, the demand for strong enforcement through cart tagging programs is growing. Enforcement provides a follow-up to education efforts with direct, real-time customer feedback on what should not be placed in the bin.

The objective of “Recycle Right NC” was to create a clear and consistent message about contamination that would reduce confusion over what belongs in the recycling bin.

But success ultimately depended on buy-in from communities.

RMMS lowered the barriers for participation by creating easy-to-implement packets of free outreach graphics tailor-made for each MRF-shed. The 225 local governments that participated and the thousands of comments on social media illuminate the demand the public had for recycling education. Even after the official end of the campaign, RMMS staff is still creating new customized recycling outreach for local governments seeking assistance.

State outreach efforts in the future will be based upon this approach of bringing together a wide variety of programs in a coordinated way to produce meaningful action.

All of the authors of this story work for the North Carolina Department of Environmental Quality. Matt James is an environmental specialist at the agency, Mel Gilles is recycling education and outreach specialist, Wendy Worley is section chief of the Recycling and Materials Management Section, and Carol Abken is research assistant for recycling and materials management.
Contact [email protected] for more information.