County bolsters glass recycling – by pulling it from curbside 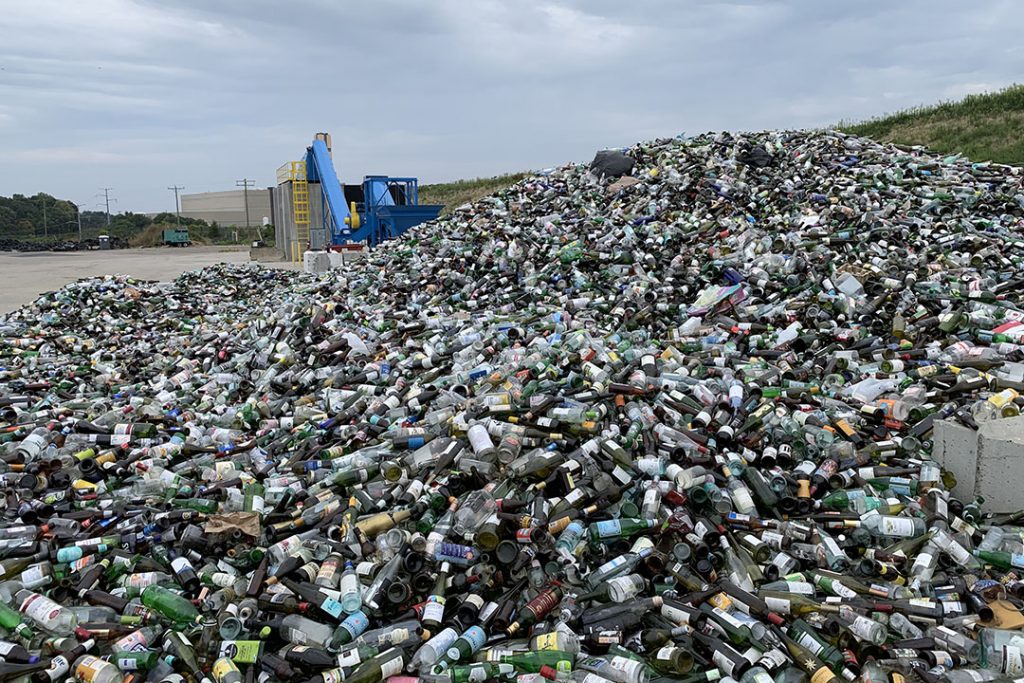 A local program in a populous area of northern Virginia is seeing positive results after shifting glass from curbside collection to drop-off. The effort has also set the stage for a hub-and-spoke system to serve the wider region.

Over the course of several years, Virginia’s Fairfax County has reworked its glass recycling strategy as the economics around its recycling program as a whole have shifted. The new drop-off program launched earlier this year, and curbside glass collection officially ended in October.

The county, located in the Washington, D.C. metro area, is now marketing its glass for use in bottle manufacturing and aggregate production. That’s a change from before, when glass was collected in a single-stream system, processed at a MRF and used primarily as alternative daily cover at a local landfill.

“We’re recycling more glass today than we ever thought possible in a short amount of time,” said Eric Forbes, director of recycling, engineering and environmental compliance for the county.

And buyers cite high stream purity, with contamination coming in at less than 2%.

“They probably have the highest quality of material we’ve seen in a drop-off program,” said Laura Hennemann, vice president of marketing and communications at Strategic Materials, a national glass beneficiation company that brings in some of the county’s cullet.

Fairfax County has a population of roughly 1.2 million people and is home to a number of large companies and federal government offices, including the headquarters of the Central Intelligence Agency.

County solid waste officials in 2016 started giving serious attention to the challenges of glass recycling in the county’s program. Glass was coming out of the private-sector MRF that serves the region with too much contamination for it to be effectively marketed to manufacturers.

Then in 2017 recycling markets globally began to sputter as China prepared to institute its National Sword import policies. That heavily impacted municipal recycling staples such as mixed paper and OCC. As the value of recyclables fell, Fairfax County’s single-stream program went from breaking even to requiring payments to cover costs.

With these factors in mind, the county set about modifying its glass collection efforts, in part because broken glass can degrade the quality of other materials in the stream if it isn’t effectively sorted out. In 2017, Fairfax County built its own glass processing plant.

Featuring Andela processing equipment, the 20-ton-per-hour facility is designed to crush glass and prepare it for aggregate production. Glass shipped to Strategic Materials is sent directly rather than crushed.

“We started the glass transition by building the plant as one of the first steps,” Forbes explained.

With the processing facility in place, the county began the next phase of its switch: expanding its drop-off glass recycling service, which had been confined to just two locations.

But by this point, it wasn’t just Fairfax County that was looking to make a change. Nearby communities expressed interest in taking similar steps, and the idea for a regional drop-off program was born.

“We were talking with our partners, and everyone was having this glass challenge,” Forbes said. “We got together and said, ‘Let’s do something unique for our region.'”

To set the glass collection sites apart from any other type of recycling or trash receptacles, the municipalities selected a distinctive purple color for the bins. They called the program the Purple Can Club. It kicked off with a total of a dozen locations across four participating jurisdictions: Arlington County, the city of Alexandria, Fairfax County and Prince William County.

Since the regional drop-off program officially launched early this year, the number of locations has doubled. 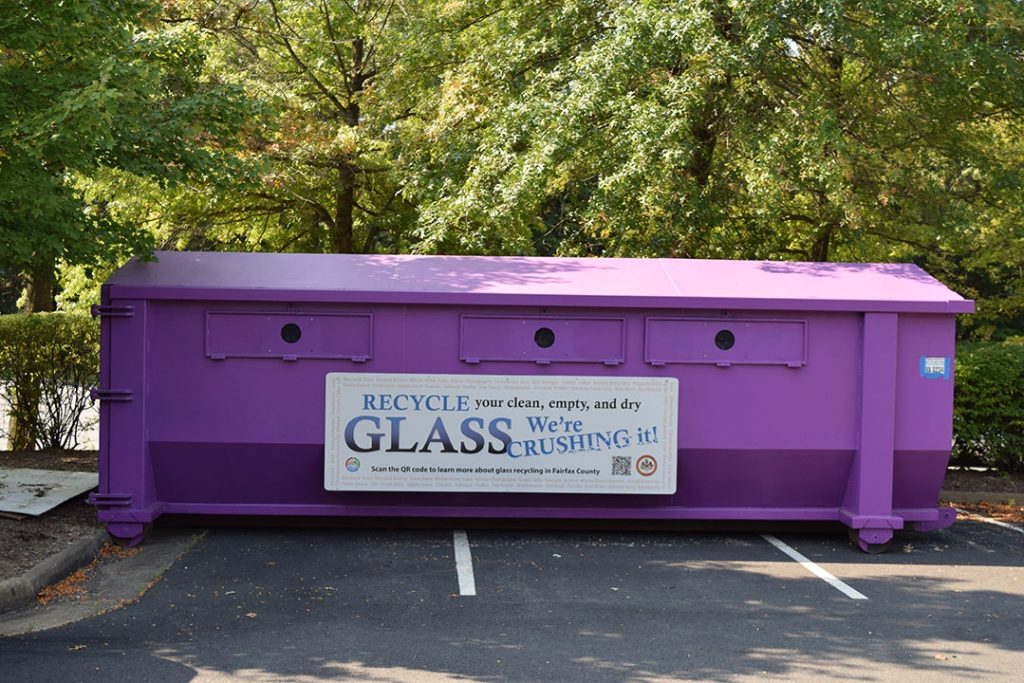 Around 25 purple glass collection receptacles are now in use across four counties in northern Virginia. | Courtesy of Fairfax County.

And in the last few months, the program has taken perhaps its most significant step yet in terms of boosting participation: Fairfax County stopped accepting glass in its curbside recycling program in October, meaning drop-off is the only option for residents who want to recycle the material. Other municipalities are looking to follow suit. Alexandria, Va. will end curbside glass collection in January in favor of the purple bin program.

The glass volume collected through the program has “grown exponentially” throughout the process, Forbes said. The ramp-up and increase in locations has made it more convenient for residents to recycle, he said.

All glass collected from the drop-off sites is transported to Fairfax County’s processing plant and then marketed to buyers.

For Strategic Materials, one of the key buyers of the program’s output glass, there’s no “one size fits all” system for best collecting glass.

“It’s really going to be dependent on a variety of items as to what programs make sense for what region, state, county,” Hennemann said.

Variables in that equation include availability of end markets, location of glass processors and quality of material, she said.

Given the challenges associated with the MRF glass and other market realities, the drop-off program proved to be a good fit for northern Virginia, Hennemann said.

Other factors also played into the program’s success. Forbes noted that the county and partner municipalities prepared for the shift for multiple years, conducting public outreach, communicating with haulers and local officials, and taking other steps.

“Making the change wasn’t an overnight situation,” Forbes said. “We built a program to make an alternative solution.”

Hennemann said those efforts are key to positive results in a switch like this.

Forbes noted the program has collected roughly 1,500 tons of glass since the launch in the spring. The program is looking to expand in the future, with the Fairfax County facility serving as a sort of regional hub that glass can flow to.

Conversations around the country

That was just the latest of several similar glass meetings held in various regions of late.

Hennemann said the Strategic summits have been focused on education and communicating directly with municipalities, “to say ‘glass is valuable – this is the story of glass.'”

“MRFs are in a tough position right now – because of China’s Sword policy there really is a focus on cost-cutting,” Hennemann said. “We understand that perspective, but we also want to make sure the cities and municipalities have the full story.”

The events have included presentations from government officials, MRF operators and more, sharing perspectives other than just that from a single downstream buyer.

Hennemann said there are more such events planned for 2020.